I’m from Oklahoma and here in Oklahoma a team tee shirt is basically the same thing as wearing a white Hanes undershirt. The team tee is staple of just about every wardrobe and we all have a whole mess of them. I, myself, have about a dozen with a handful out in donation boxes in the garage. Because even though this is the Bible belt, sports is a whole ‘nother religion… especially football.

Now that Football Season is in full swing, you’re going to see crimson and cream and orange and black tees everywhere all of the time in Oklahoma. And because they’re so popular there are TONS of places you can buy a tee to show of the team you root for. One of my favorites came from the grocery store. NOT a we have everything super store, a grocery store. I actually got it next to the frozen food section. My second favorite, came from a truck stop after I finally washed the fried food smell out of it. 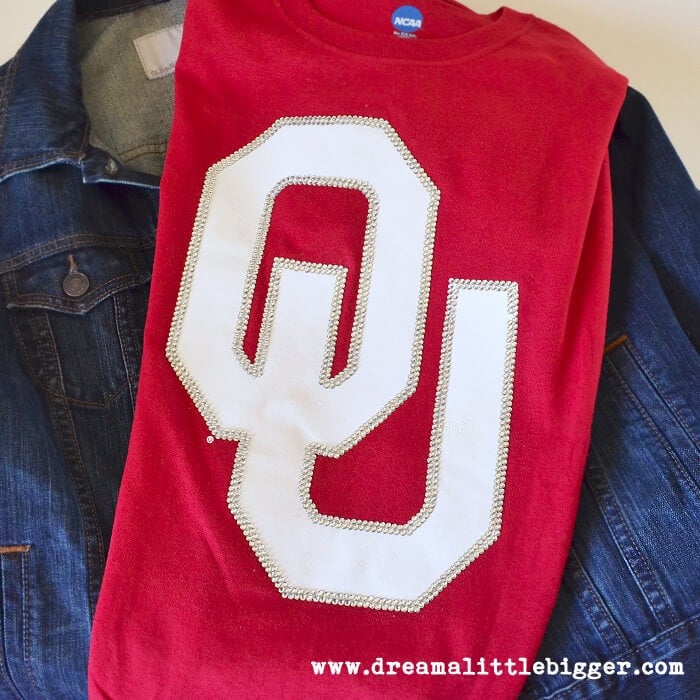 Even  those little chichi shops that have all sorts of cute and expensive things have a team spirit section. You know the type of place where you try to be sly when turning over the handwritten price tag to knowing good and well in advance you’re going to balk over the number you see there… Well, I was in one of those when I saw a team shirt bedazzled into complete and utter awesomeness. And. I. Wanted. It. Until I saw they wanted $35 for the thing. I promptly decided they could cram it.

And where did I go? To Wal-Mart where I bought a team tee for $9. I then ordered 1,140 little clear hot fix rhinestones on Ebay for less than 5 bucks off of my phone. When they arrived I was totally in business. 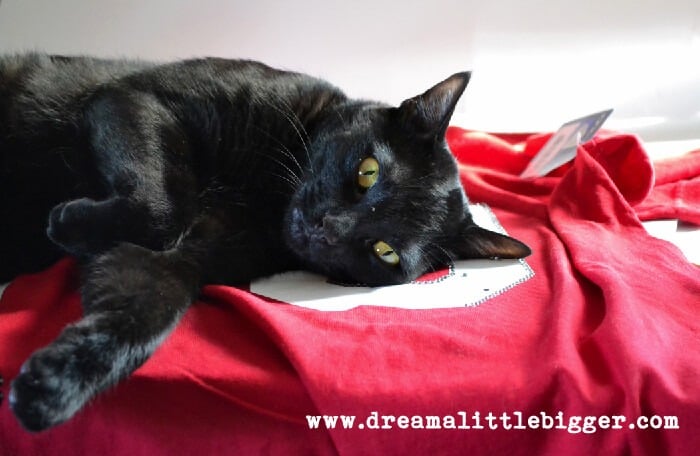 This DIY tutorial is cat approved.

I’m not going to lie. This project wound up going downhill pretty quickly, partially because of how slowly it was working up. But luckily I worked out the kinks so that you can knock one of these suckers out in time for next weekend’s game! 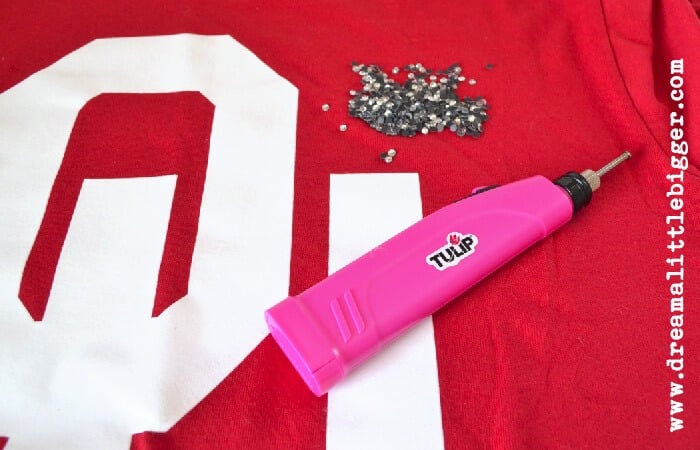 Now I initially planned to  use my little heat setter to attach every single hot fix rhinestone. And since I bought the tee shirt with the absolutely biggest OU logo on it, well, that was going to be a lot of individually placed bling! 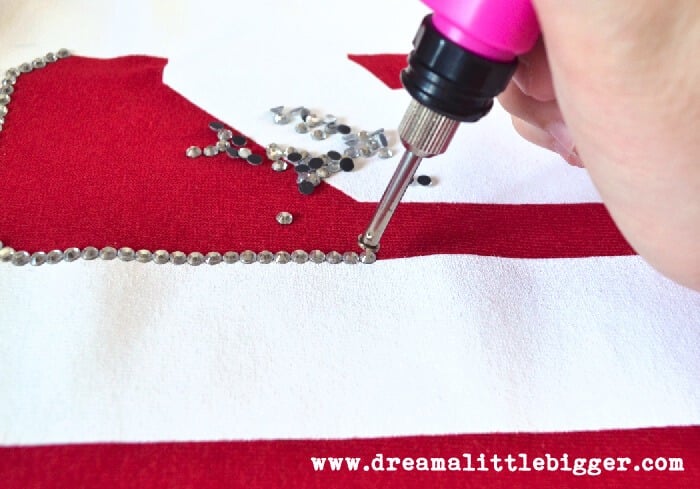 But the good news using the heat setter you have really, really good control over the placement of each stone. Following the edges of your logo, tack down a stone, wait a bit for it to cool and then flick it with your fingernail to ensure it’s going to stay put. 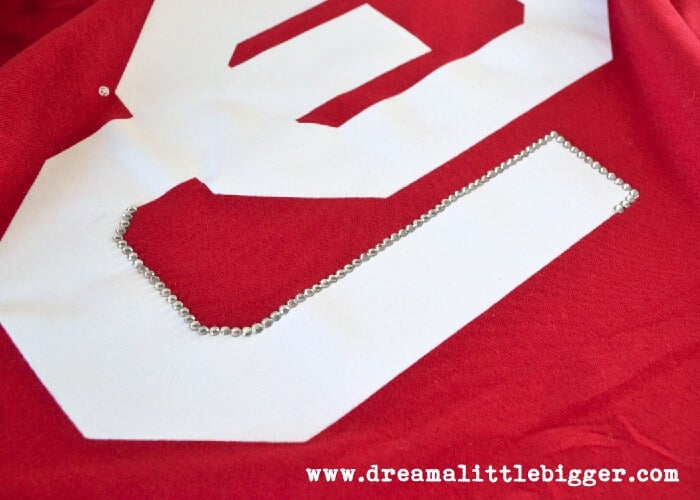 About an hour in, this is how far I’d gotten and I wasn’t happy about it. But look at how perfect those lines are! I continued at it and outlined the majority of the logo. 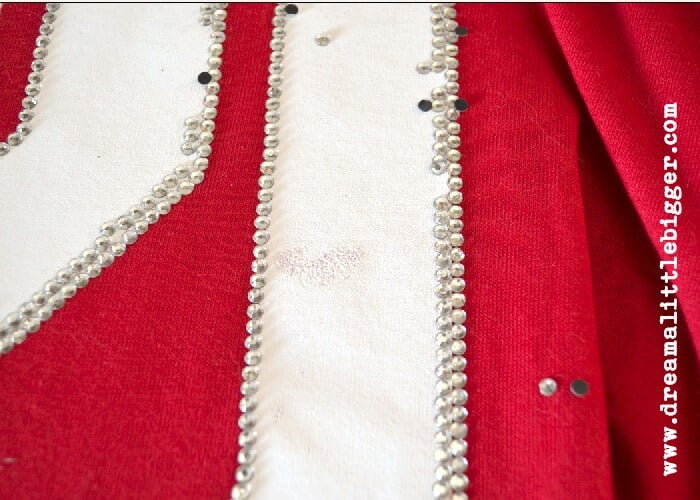 Then I figured that I was a genius because I lined up all of my rhinestones in the next row and hit ’em with a hot iron. And guess what happened? I got to scrape paint from the tee and stones that flipped and set to the iron off of it for a good 30 minutes. So, yeah, DON’T do that.

I got so irritated that I shoved the project in the closet and walked away. 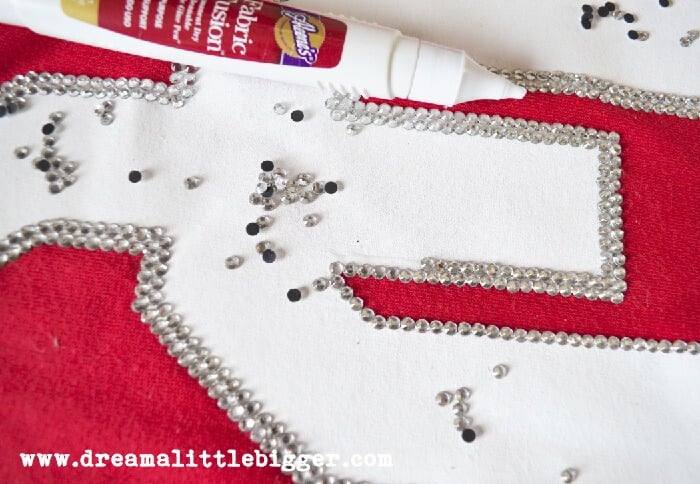 When I got back after it I heat set 3 or 4 stones when I realized a much faster way of getting this done. And I was so mad at my self for not thinking of it before.

I used my fabric glue pen to draw a tiny line, placed my rhinestones on the glue and allowed to dry. I was able to get the second line of rhinestones done in about 15 minutes. That’s an amazing difference. It worked really well for the area I hadn’t gotten around to outlining, yet also.

Set your tee aside so the glue can fully set. 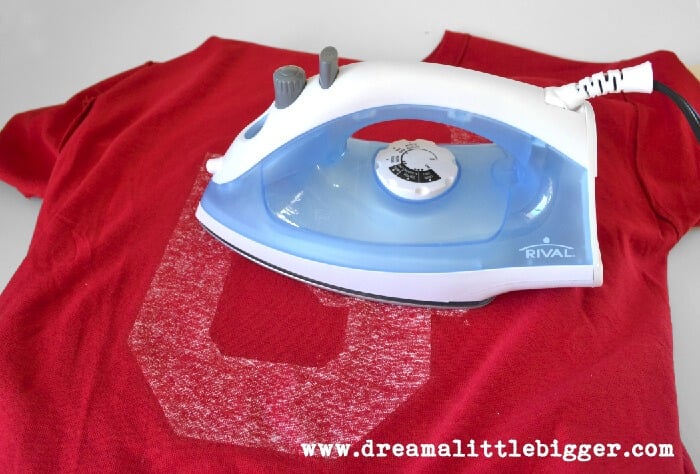 Flick your stones and reset any that fall off. Go ahead and give ’em a good shove because it’s better they fall of now than in your dryer. Unless you like having a disco ball dryer with rhinestones stuck to the drum. I gotta say, that’s pretty cool, too.

Turn the tee inside out and put something in the middle of the shirt. Give it a good press on the hottest setting your fabric will allow. I went over mine 3 times allowing to cool fully in between each. 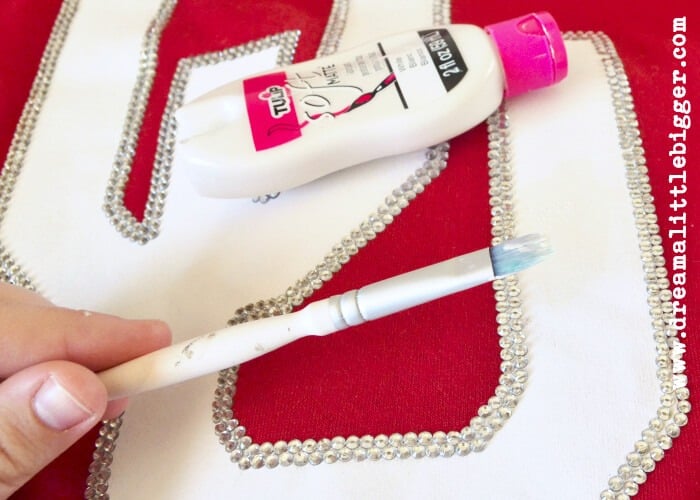 And if you’re wondering, I was able to patch up my little boo boo pretty easily with white fabric paint. But you shouldn’t need this handy tip! 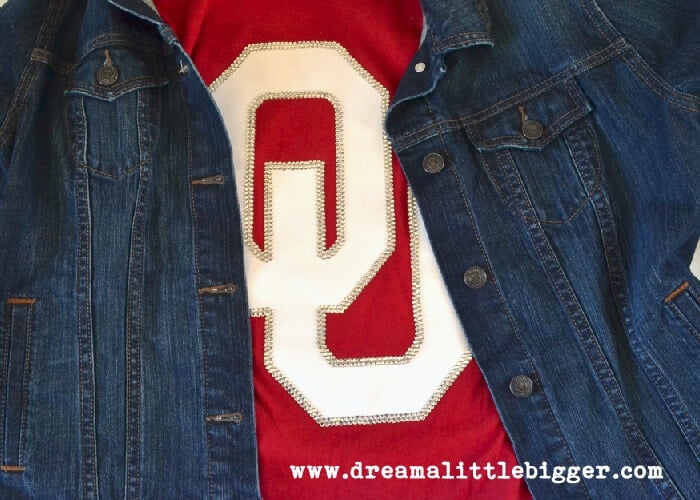 My tee shirt is going to be the envy of everyone in that football stadium, I just know it! Plus, I got a shirt I loved but refused to pay big bucks for for less than $15 with enough rhinestones to knock out another!

You may have seen this rhinestone tee tutorial originally at Nellie Bellie!