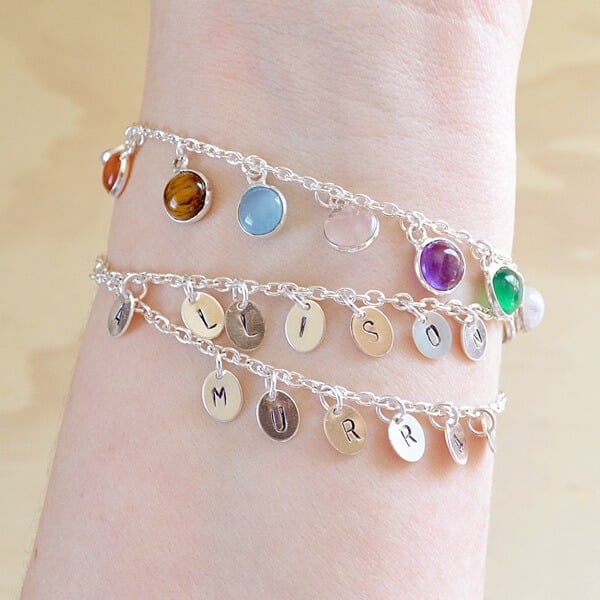 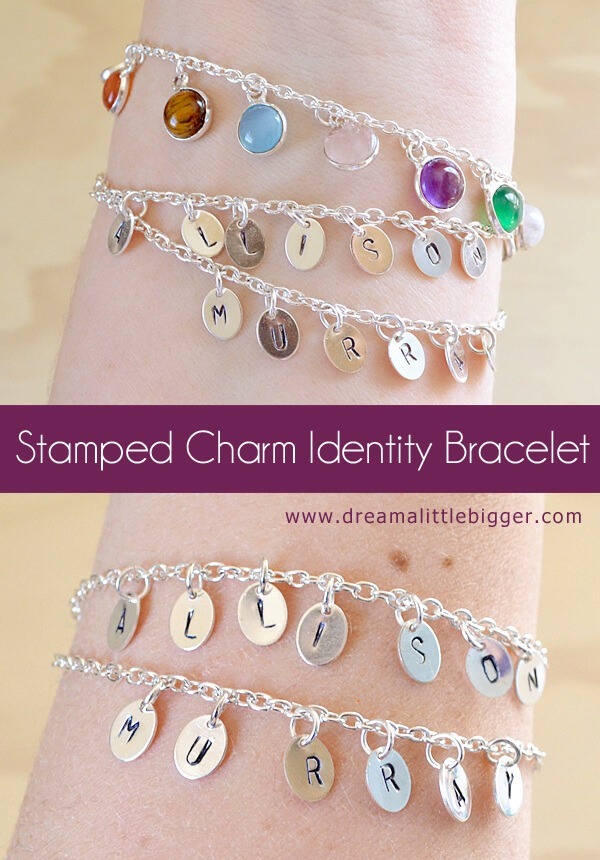 I’ve always been proud of my name. It’s one of the things that my parents gave me that will always be with me… kind of like my ears that stick out :) I know I was given a good one and as the child of my father whose middle name was taken from his father, that name was also handed down to me (yes, even though I am a girl and they obviously are not!)

When I was in elementary school there were two things about me. I loved the double dutch jump rope days in PE and I was proud of my full name. So when it came to be my turn, I’d jump out to my full name giving me an extra few hops! But one day my teacher informed me that I was mistaken about my middle name. “Your middle name is Glynda, like the good witch” she told me and I argued. And I got into trouble. I continued to hop to the name I knew was mine until after many, many times getting into trouble I finally believed her. What an idiot I, Allison Glynda Murray had been.

I still remember when I told my parents what my middle name was. We were driving down the road and Daddy was showing us how to hang our arms out the window with our glass pop bottles so that the wind would make a sound and that drinking the soda down would make a different sound. I was informed that teacher was an idiot and that I was correct about my middle name all along. 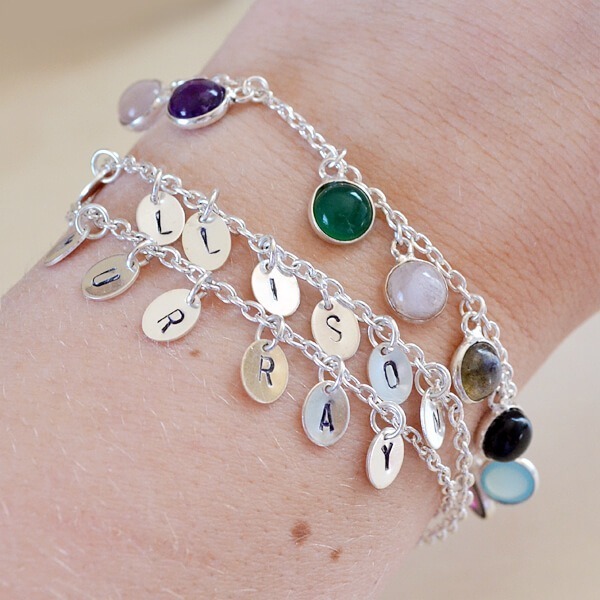 But all of that is neither here nor there, really, is it? But what is totally pertinent is the fact that I’ve always had a thing for charm braclets AND identity bracelets. And since I just so happened to sleep buy a hammer and a block I figured I might as well go ahead and get some stamps while I was awake! So let’s move on and make a stamped identity bracelet! 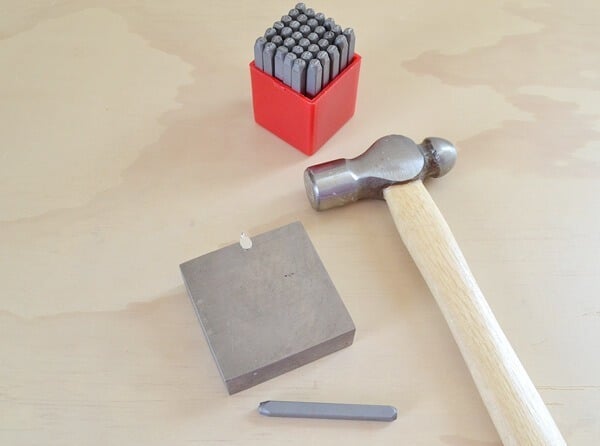 This is the stuff you’ll need to get into this particular craft. The red box is filled with my stamps. The metal thing is the block you work on and you use the hammer to whack the end of the stamp. Pretty simple stuff. 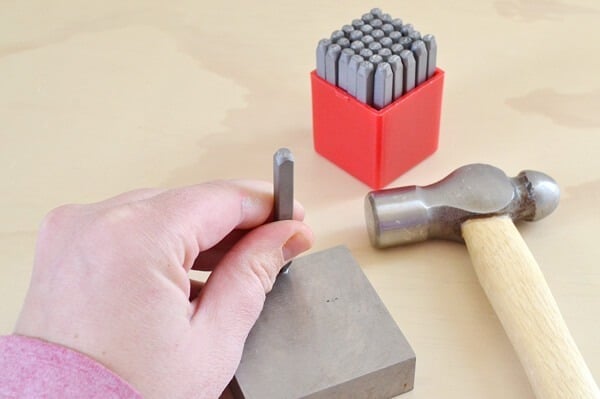 Lay your blank flush onto your block, make sure your stamp is turned correctly and give it three consistent taps. Not light but not full force either. 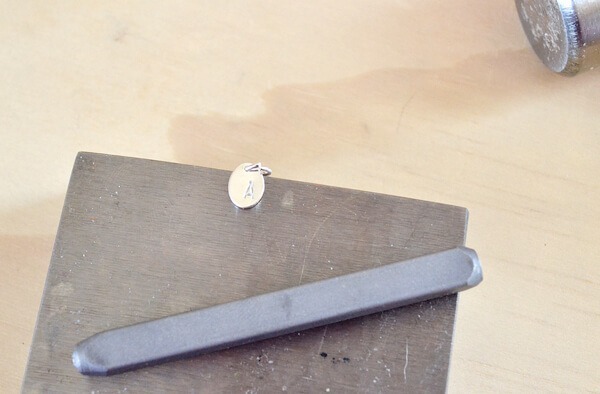 And the stamp has taken to the blank, but look at that business… it’s pretty invisible. 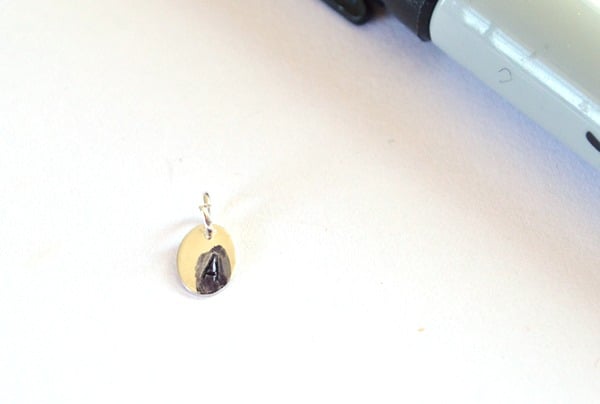 So draw all over it with permanent marker and wipe it away with a soft cloth. If you let it sit too long, put a bit of alcohol on your rag and you’ll be set. 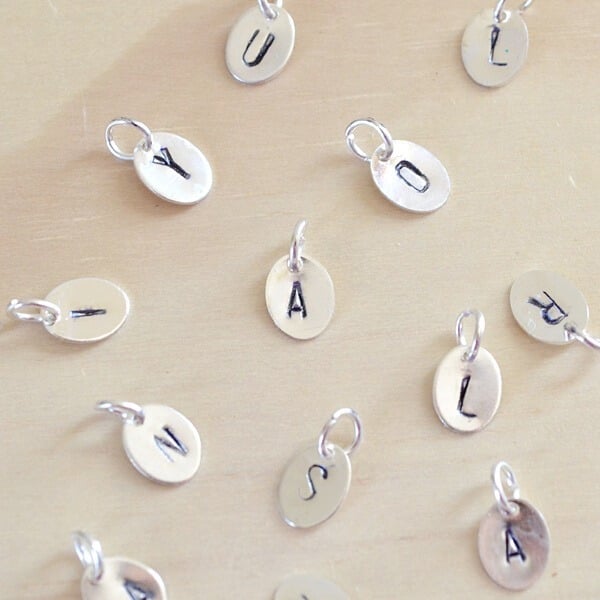 Some of my letters are better than others, but this was my first stamping rodeo and I’m pretty happy with the results!

Now let’s make a bracelet with these fella’s. 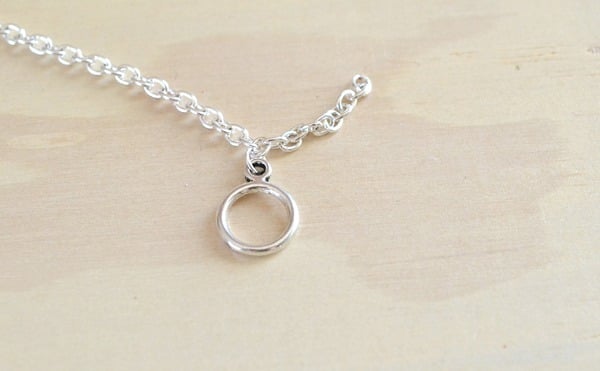 Cut about 14 inches of chain (make sure it will more than fit around your wrist twice before actually cutting!) and attach the circle portion of your toggle clasp about an inch in. Place the bar at the end but know that you’ll probably need to move that inward and trim the excess chain here in a few steps.

This bracelet is going to wrap around twice and have the first name and last on separate “lines”. Measure out the width of your wrist for proper spacing of your letters when worn. For mine I decided I wanted around 1.75 inches and then figured out the spacing between the charms to make that happen (for my chain 3 links between each charm). 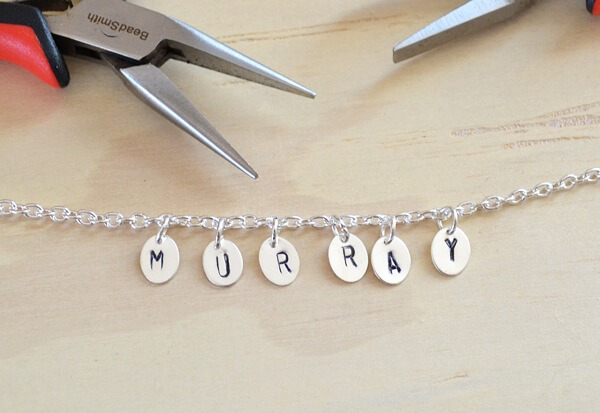 Attach those suckers with your jewelry pliers by the jump ring that is already attached. 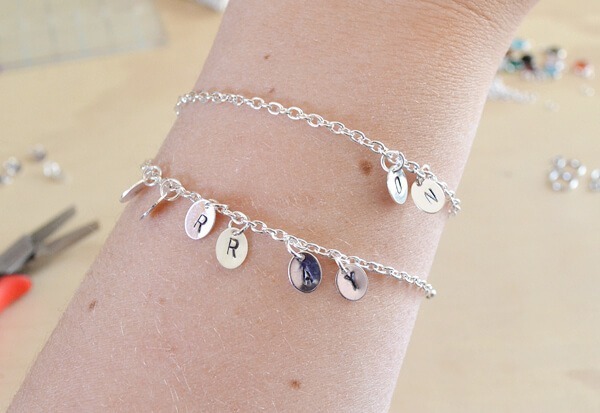 Wrap your bracelet around your wrist and move the bar from your toggle clasp accordingly for the fit you want. Add your first two charms and try the bracelet on again to be sure you are happy with their location. After this pic I wound up moving my charms over two links so my names would line up better. It’s not a perfect science so patience is kind of in order. 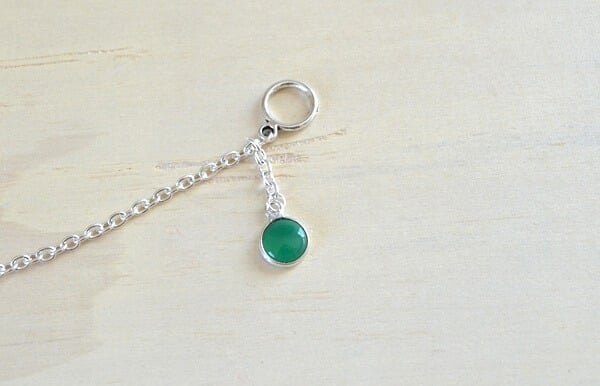 Attach a decorative charm to the end of your chain on the toggle side. 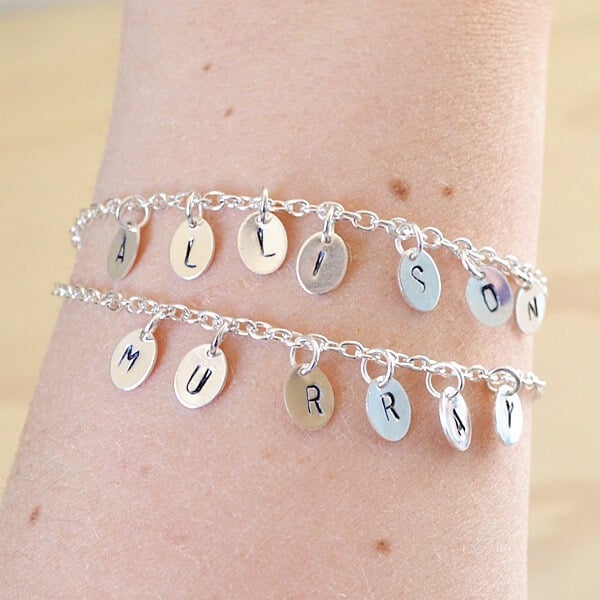 And now you have a lovely wrap bracelet that states your name!

And the clasp side isn’t exactly too shabby, either! 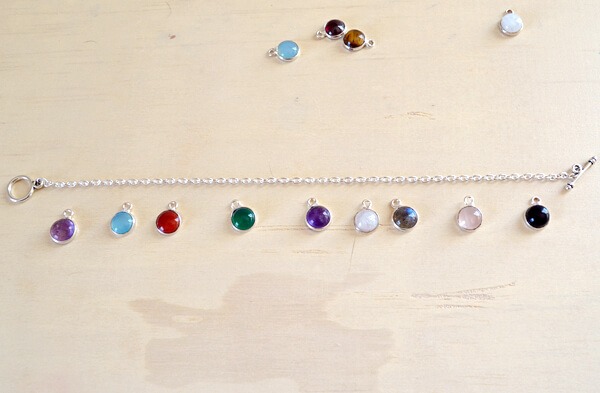 Next I cut chain to wrap around my wrist a single time, attached a toggle clasp and placed out my decorative charms to make an accent bracelet to accompany my stamped identity bracelet. 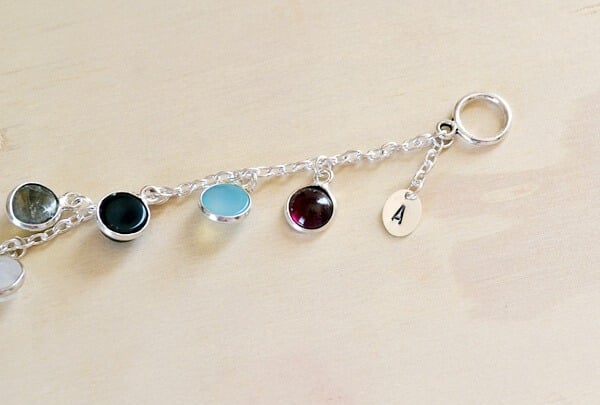 Since I accidentally stamped an extra A, I went ahead and tacked on 5-6 links of chain and added it to the end of my toggle!

And together I think they are absolutely fabulous! 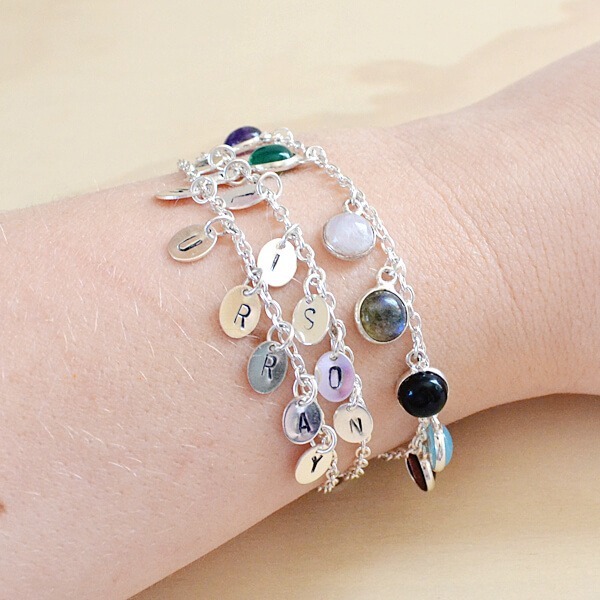 With your natural movement the bracelets will get kind of jumped up unless you make them very tight which I don’t think is a good idea. Even jumbled together the bracelets are super pretty. But when you hold your arm up you can see your words again, though sometimes it will read last name first!

You don’t have to just do names. You can also do a message like “I Love You” or “You’re My Special Angel” – what the heck ever you please, really. And it totally doesn’t have to be so mushy, those are just off the top of my head!

I'm a crafty cat lady with big dreams and an inability to sit still. I make it, I live it, I love it. Here at Dream a Little Bigger you'll find lots of inspiration for crafts, crochet, DIY, food, pet life and all things rainbow. Lots and lots of rainbows.
291 Shares
Pin288
Share3
Tweet
This site uses cookies: Find out more.