Here lately I’ve been more than a little guilty of totally being down in the dumps. 1. My cat has been sick, which is sad all on its own, but the extra care she has needed has taken up so much of my time that getting things done has been stressful. 2. Because it was my first ever storm while living by the gulf, I super stressed out over Hurricane Harvey. 3. I’m neat by nature and Rob is a messy guy. With him going back to work for the fall semester he’s leaving even more messes behind for me to pick up and it’s hard on me. 4. My interstitial cystitis is kicking my butt dealing out more pain than I’ve had to deal with in a long time. 5. Getting work done with all of this going on has been crazy difficult, tools have been breaking, supplies going missing and I worry about the quality of everything including ideas and photography and yada, yada, yada.

But things are looking up!

Marla had her surgery and did well with it and she’s back home making biscuits and I’m super positive about her recovery :) The hurricane missed us and went right by us. Literally. Not figuratively and I’m using the word wrong, but actually LITERALLY. 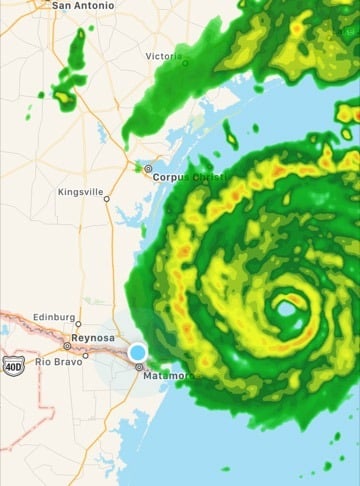 See that dot? It’s my house. And no, don’t live in Mexico, but I am just a few miles from it :) That big swirl thing? Hurricane Harvey.  JUST MISSED US. I super stressed for the equivalent of 2 days of rain which wasn’t bad at all. We were lucky and for that I’m thankful but my heart goes out for everyone who wasn’t as lucky with Harvey or Irma because this has been a nightmare for so many. As far as work goes I had a recent post go kind of mini-viral. I made some Epsom salt soaps because my stressed out body hurts last week and my traffic went nuts yesterday. Some sniffing around and I found that that post had been pinned over 2 thousand times in only 4 days. Cool! But it gets even cooler! It’s been pinned another 2.7 thousand times in the just last 24 hours. Huzzah! Now as far as a clean house and good health goes, well, I’m working on it and so is Rob. And I’m sure both of those things will be looking up soon :)

Ooh, and there are other good things! I bought my first pair of MOM JEANS that go up to my belly button and I love them and bought 2 more pairs and I’m never looking back :) They were selling PINK carts at Michael’s and I got one and rolling that thing around my office with supplies for my current projects makes me happier than it probably should. Lastly, I got to eat biscuits and gravy TWICE (gluten free but still tasty) and as a Celiac that’s pretty awesome :)

A lot of the positives are coming in, I think, reflecting a more positive attitude that comes from my taking the time to do things I enjoy a little bit like reading and playing games and taking time to play with my pets more. I’m doing crafts that are colorful and, well, happy, and that helps, too! I’m making projects like these rainbow smiley face magnets… aren’t they so much fun? And every time I go to the fridge or pass by it to get another load of laundry (ugh) on I can feel my lips tugging upward because silly little things like this make me happy :) And I think that’s important.

So today I’m going to show you how you can easily make plaster magnets using just about any silicone mold and pep them up with some bright, beautiful color for a fun addition to your life. Want to see how to make your own?

So this is my mold and it’s called “Have an Ice Day” which I think is hilarious!  I got mine on clearance at the craft store but I paid more for it than I could have gotten it on Amazon, so that was a fail :)

These days I’ve started mixing my Plaster of Paris in a mason jar. Instead of stirring you shake it up like a martini or something BUT you have to be super careful. Plaster really heats up as it starts to set and you can’t just leave it sitting with the lid on or, I’m pretty sure, it’s gonna explode. I’ve never had it happen but I really, really think that’s the end result so if you also use a glass jar, use it, clean it and move on but DON’T leave it with plaster in it. Okay, disclaimer of sorts out of the way, let’s move on.

Mix your plaster according to package directions. You want it to be thin enough you can pour it and it will fill in the nooks and crannies of your mold but not so thin that it will compromise the end result. Too thin plaster will not be as sturdy as better mixed stuff but too thick and it won’t mold as well so you might have to experiment to find a happy medium. Luckily plaster of Paris is a super cheap medium.

Once you’ve filled your mold place it somewhere flat to set up. I like to put my mold on one of those $1 baking sheets from Walmart so I can easily move it all around without the silicone bending and flexing and messing up my casts.

It’s difficult, but leave your smiley faces to sit in the mold at least for a few hours. Plaster sets really quickly and you might want to pop those puppies out sooner but if you leave them then details like that awesome wide grin will hold much better and be less likely to break off during un-molding.

Once out of the molds give your plaster a few days to dry out a bit. I like to put my un-molded plaster casts on that $1 cheapie cookie sheet again and set it on the back burner in my kitchen. When the oven is on or I cook a little bit of heat escapes that one burner and helps to dry them more quickly without any extra effort :)

You can sand own your casts if they have wonky bits and pieces and you can do this while they’re totally dry or still kind of wet. I go with still kind of wet so I don’t get so much airborne dust to worry about.

When dry you can paint these puppies any colors you please. I went kind of rainbow and hit up my fave colors that make me super happy! Now I brushed on paint and had to do 3 coats total which took quite a bit of time (especially since it had rained because of Harvey). If you’re wanting to complete this more quickly, I’d strongly suggest using spray paint, which will dry lots quicker, instead.

Apply a button magnet to the back of each plaster smiley face and this guy is done!

Now a few of my faces aren’t perfect. I experienced a bit of a learning curve to get my smiles out without breaking and you might have a few imperfections, also.

Just remember to keep your plaster not too thin or thick and to leave it to set up a few hours longer than you normally would need to if you’re using the same mold, or one with delicate details and things will work out a little bit better for you :)

Put your finished magnets on the fridge and who knows, all of those smiling faces just might be the visual pep talk you need to bust out your own grin before you get back to the grind :)