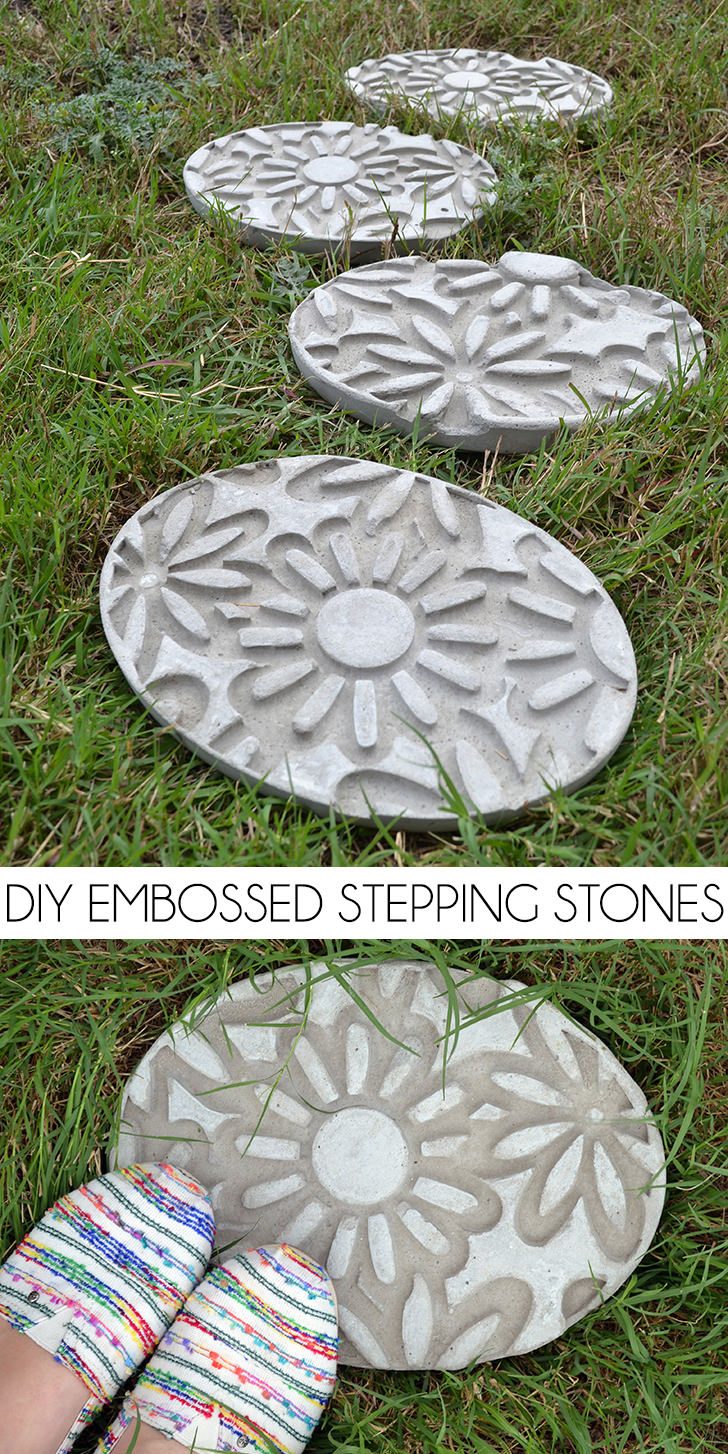 It’s weird how we have very specific memories as children, isn’t it? I remember hopping along the stepping stones on the side of my Mimmie and Poppa’s house. There was literally nothing going on over there except the gate to the front of the house but I still played over there. I remember that’s where I pet my first cat and Mimmie caught me and told me that I just caught ringworm and that I was going to lose my hair. Apparently there was a bit of a problem with kitties and ringworm and I guess hair loss was the quickest way to me giving the neighborhood strays wide berth.

And I did give cats in general wide berth even into high school where I cried and ran away from kittens. I don’t think Mimmie meant for that to happen at all, and seeing as how I have had tons of cats as an adult no lasting damage was done :) 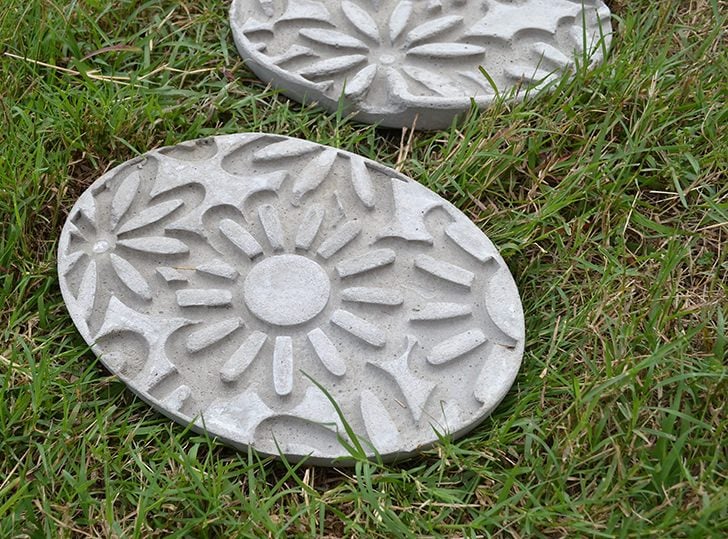 Last summer when I was staying with my parents in Houston Daddy and I made up some stepping stones for the blog but we thought that they weren’t good enough. I was amazed when Rob saw them out in the back, back part of the yard and asked if we had made them. When I uncomfortably tried to explain how it didn’t work out like we had hoped he stopped me to tell me that they turned out really pretty and that he really liked them. Wow! How nice is that?! :)

After our first attempt didn’t go as well as planned we put our second idea on the back-burner even though we already had all of the materials. But having a bit of confidence about the project after Rob’s kudos I decided to try the project my mom and dad and I dreamed up last summer. And I’m so glad I did. These things are BEAUTIFUL and I can’t think of a craft I’d rather share on Earth Day! 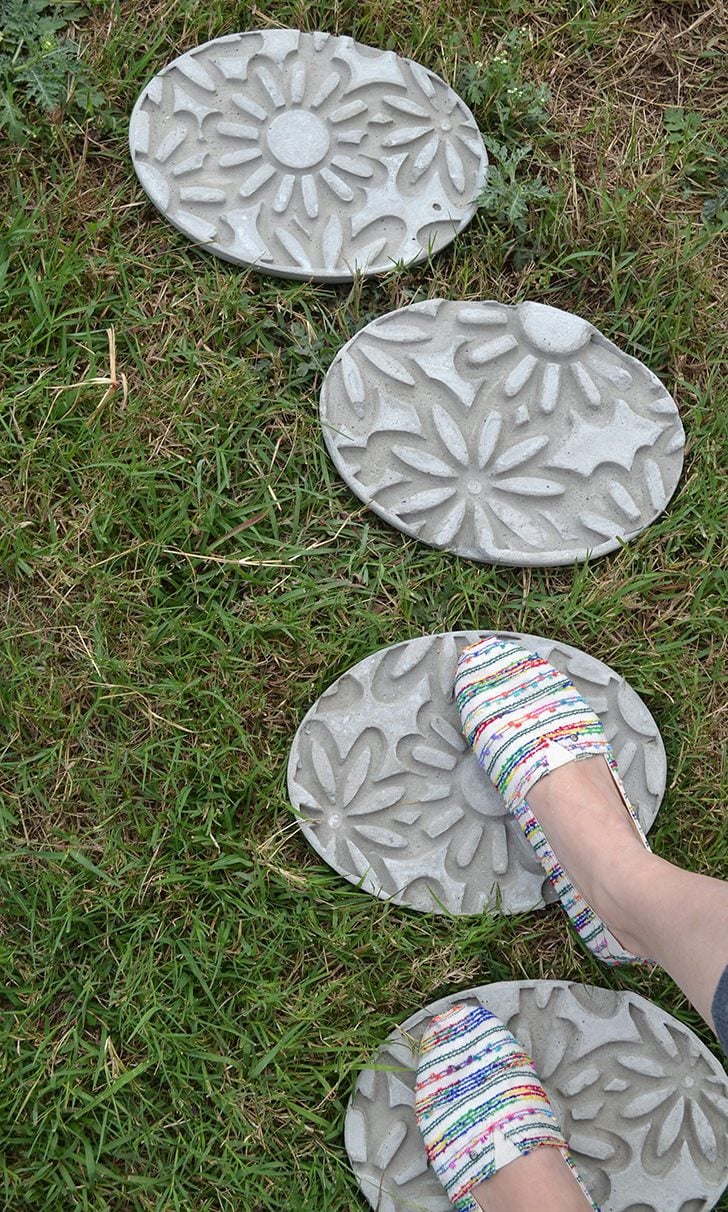 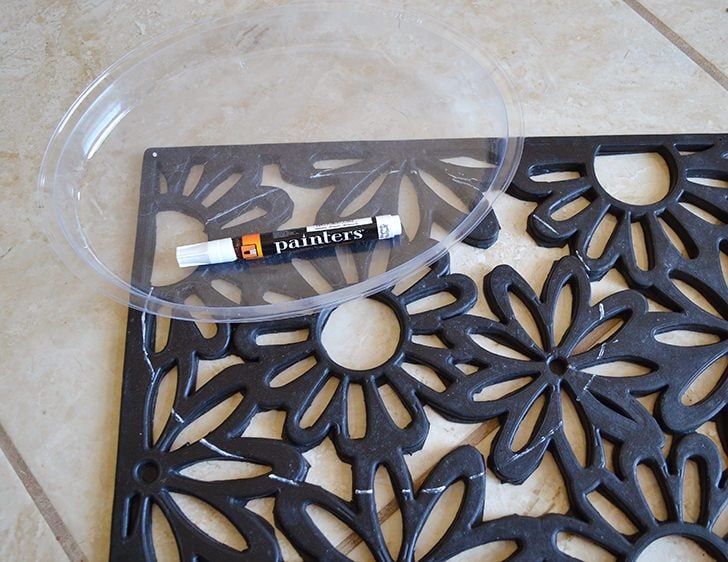 So here is my doormat. I bought it off of Amazon but can’t seem to find it in my purchases (I buy a LOT of stuff on Amazon in a year!) so maybe I got it somewhere else. Keep an eye out for pretty mats because that is what will make these stellar! 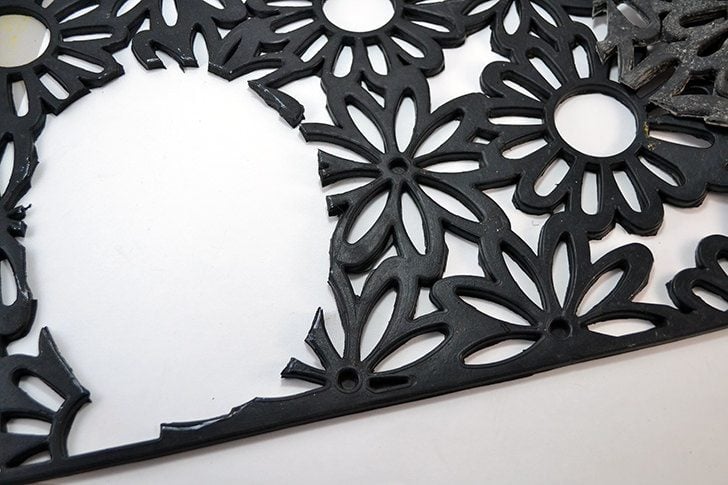 Using the forms from your stepping stone kits, trace the shapes onto  your mat and cut out. I have some super strong scissors I got as a 2 pack from Walmart that cut right through this business. They actually say strong somewhere on the packaging and they cut through metal. They have gray handles and are by the brand Weston, I believe. 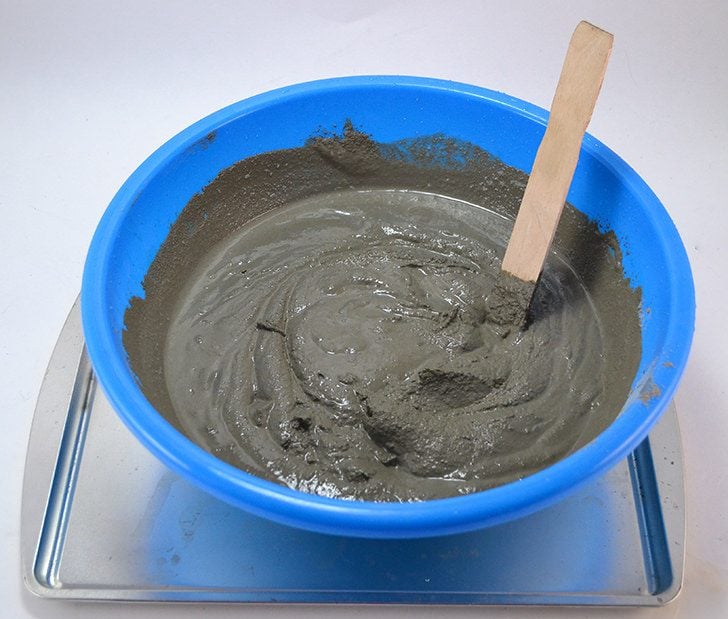 Mix your concrete as directed on your packaging. Try not to inhale the dust/powder as I have been told that is bad, bad, bad. 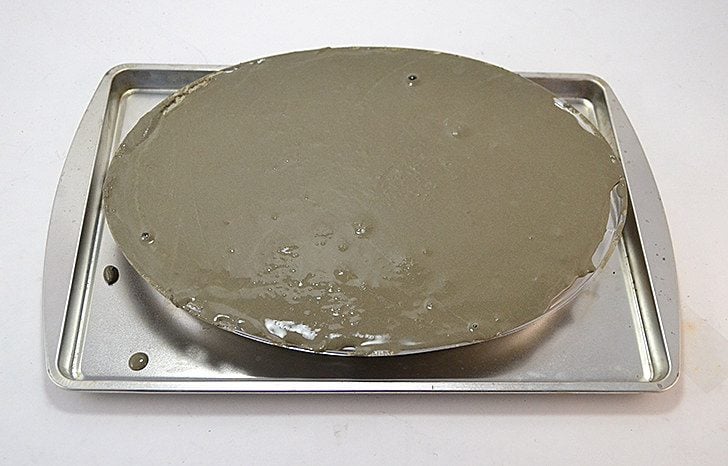 Pour concrete almost to the edge of the form. Tap on the table top to help remove any bubbles from the bottom of the form. They’ll actually come up through the top of the cement. See it? 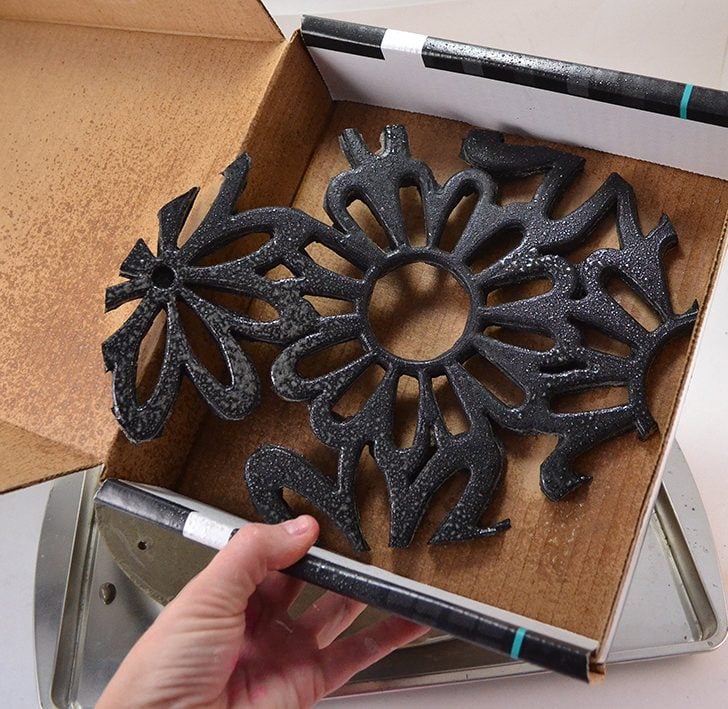 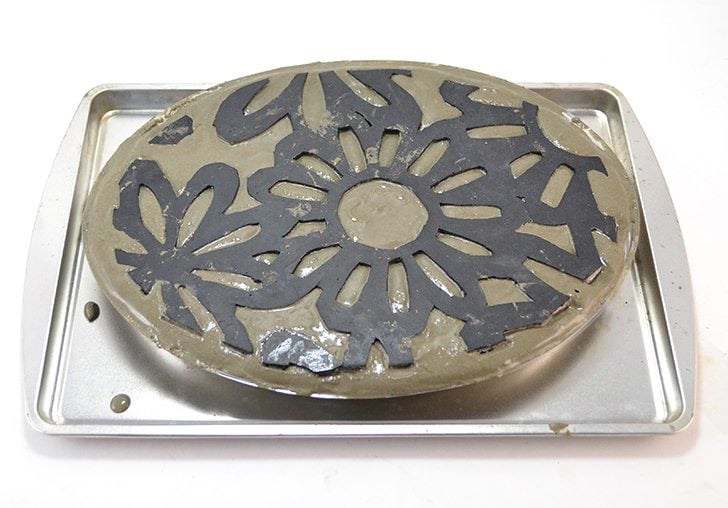 Push the rubber into the concrete as much as you can without having the stuff go over the top of the rubber.

If you’re allergic to latex like I am, be sure to have nitrile gloves handy for this tutorial FYI! After my first attempt I couldn’t figure out why in the heck my hands were bright red to kind of purple and rash covered that spread to my face (I always touch my face constantly though every dermatologist I’ve ever met has told me to STOP!) Whoops!

Set your stone someplace good and flat and leave it for at least 24 hours. 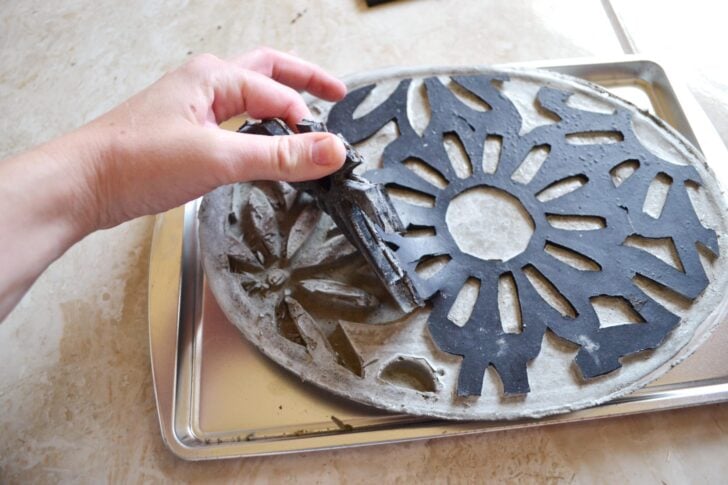 Gently pry away the rubber mat out of the concrete. You’ll need to loosen up sections and then try to pull it straight up as much as possible. Some breakage is inevitable but it’s not terribly noticeable in the end so don’t sweat it. 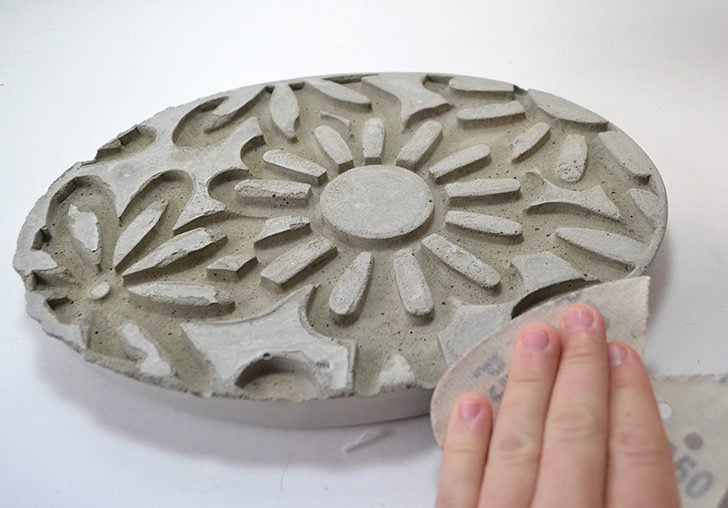 To finish use a very coarse sandpaper (I used ones meant for a mouse sander as they have a soft, sort of fabric covered backside that keeps your hands from getting hot from vigorous sanding). Remove any weird bumps around the sides and on the edges of the designs themselves.Above the right side is sanded and the left is not. It’s a huge difference for just a small amount of effort! 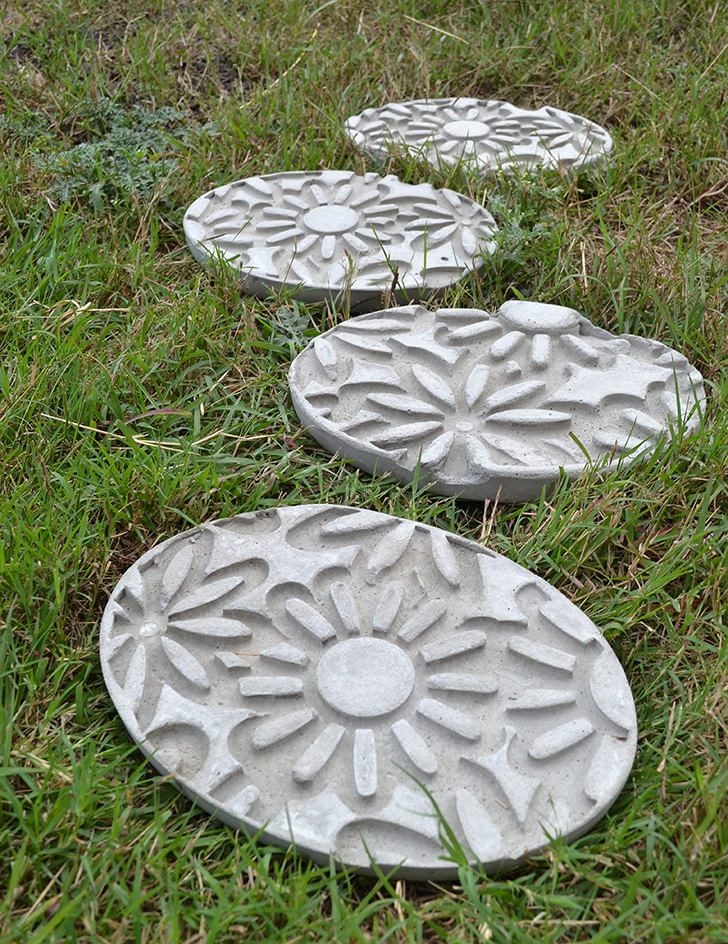 Place your stepping stones outside and you have a very pretty and very practical little path to follow!

Now my stones are pretty small but they’re still big enough to take steps off of. I’m so glad that Rob gave me the courage to tackle this project because in the end, it’s one that I’m really, really proud of! 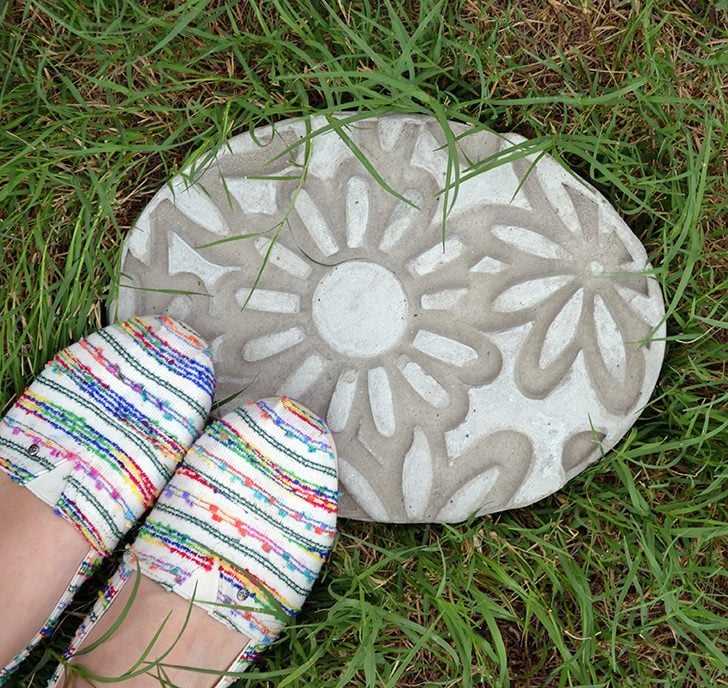