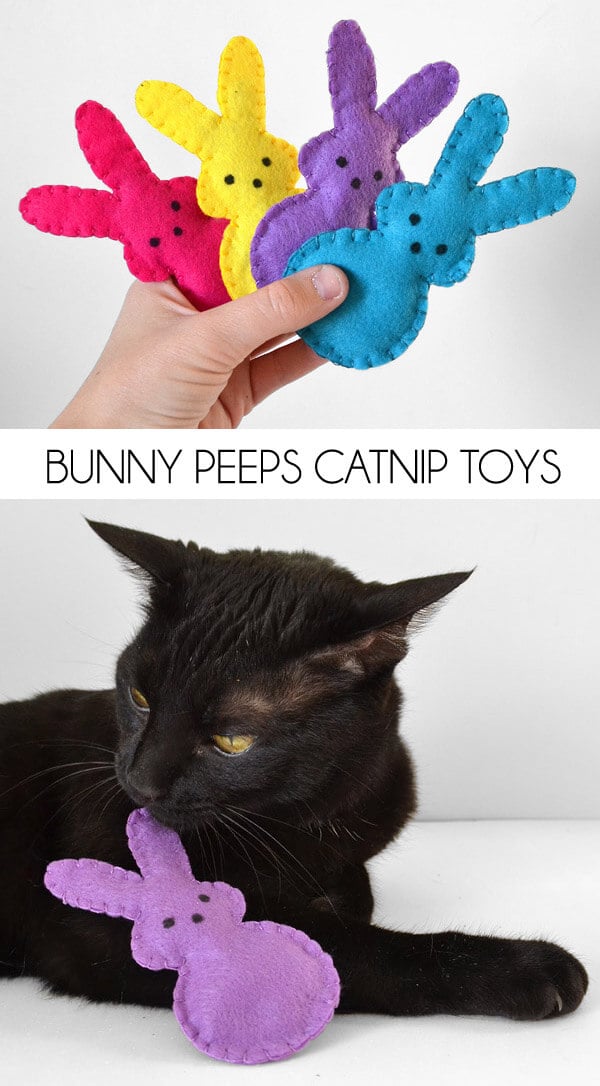 It’s been some time since I have made the cats some new catnip toys. To be honest they have a freaking ton of them. They have some safari animals, gingerbread men, zombie gingerbread men and some fortune cookies that I made for a DIY magazine. They’re hardly pretty these days but dang if they don’t really love them. They’re super fuzzy from ages of being cleaned with raspy tongues, thrashed at with sharp teeth and thrown around with kitty claws. 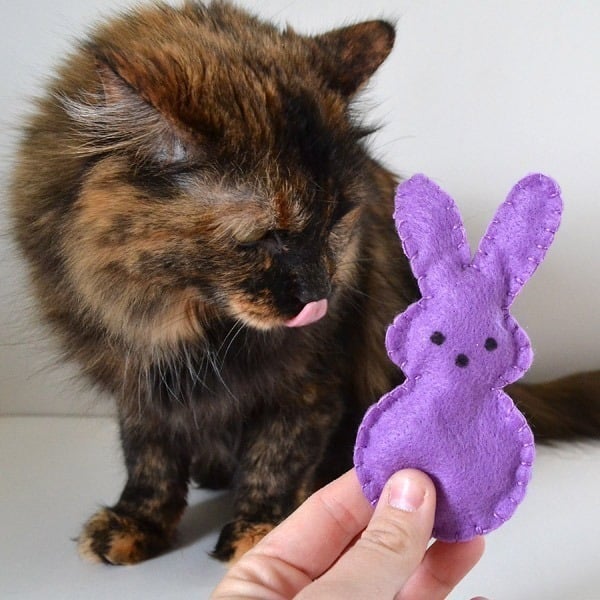 But lately they have been working overtime and are super ratty as the cats are all about them, probably because it is the only thing Ollie doesn’t try to play with too. One safari animal has gotten so fuzzy that one night when I stepped on it in the dark while it was still wet from a play session, I just knew I had squished a dead something or another beneath my toes. You know that feeling you get when you’re expecting the worst in the dark and when it comes on the monster isn’t there or, as in this case, the gross thing is not a dead creature but a cat toy. 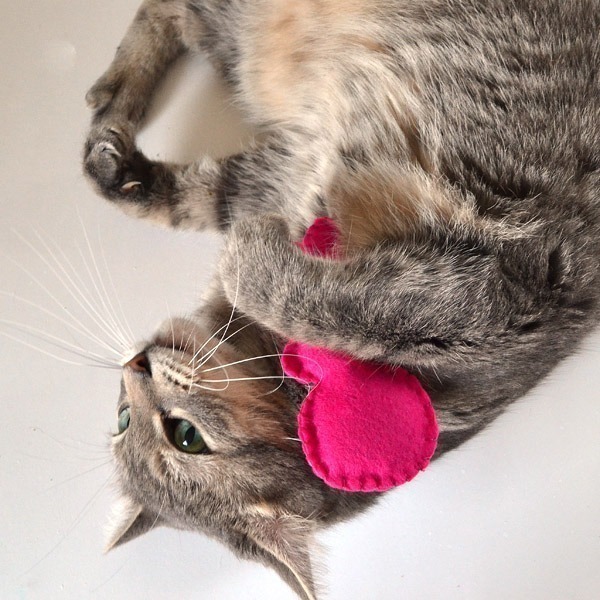 It’s not a terribly off base assumption that it could be something nasty. I live in the country and as such country things get into my house. I have stepped on a mouse more than once (eek!) and once got my hand snapped at when I was trying to take the cats’ rat toy away from an otherwise very sweet dog Joni. When I did get it, it turned out to be a dead gopher. Lovely.

But that’s enough nasty talk for one day, let’s make some super cute Easter bunny Peep toys for your furry ones! 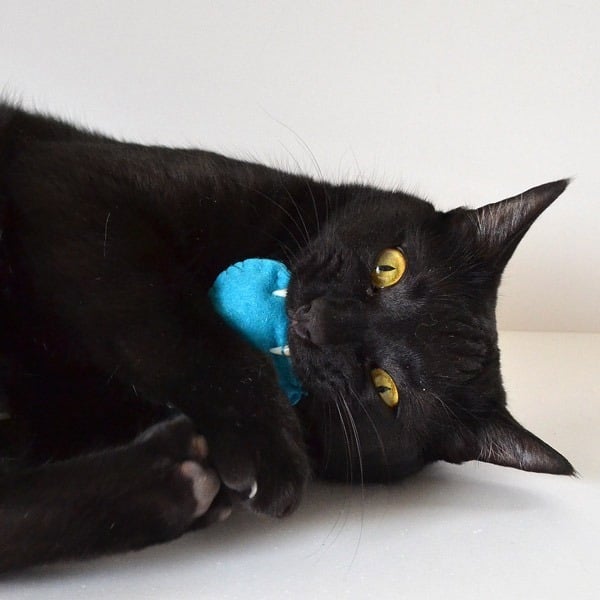 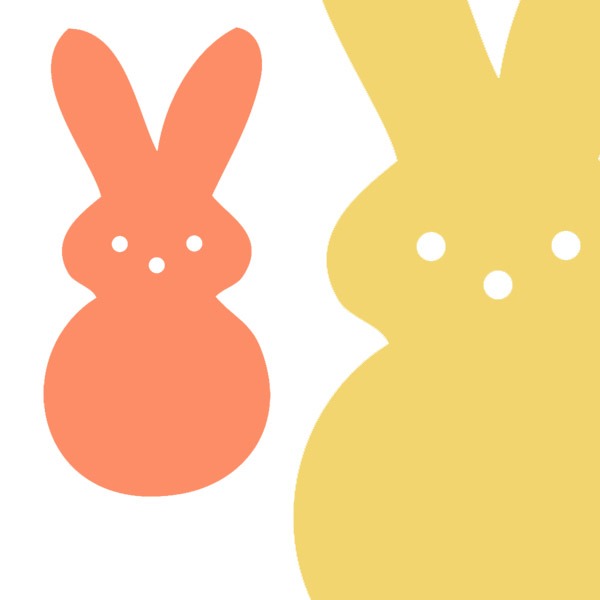 First up, get your freebie PDF printed out and ready for action. 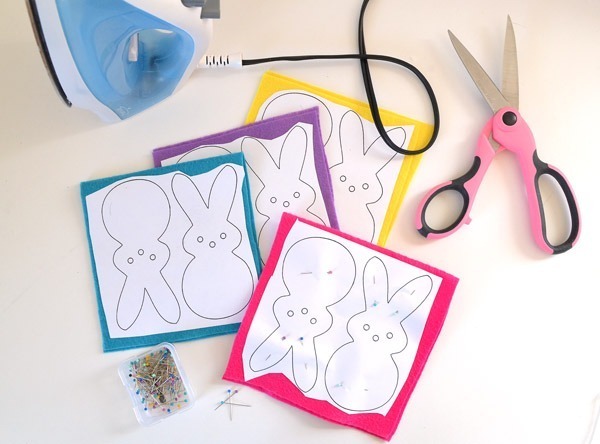 You have a few options for getting the pattern onto the felt. I prefer to print onto freezer paper (not the waxy side) and iron that directly onto the felt. You get the sharpest shapes that way. There is a whole tutorial on how to cut felt really well with this method here… 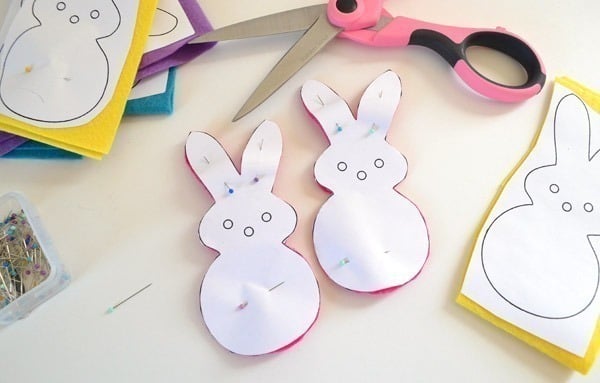 Trim those suckers out with decent scissors. I have a pair that are just for cutting felt. They used to be my fabric scissors until somebody used them on paper so I just moved them over to another use!

To get two pieces just the same, fold the felt in half and pin the sheets together through your pattern. 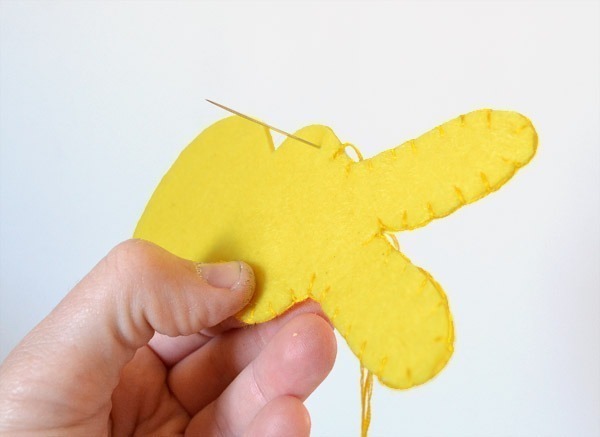 Once you cut out your shapes use the blanket stitch to sew the two matching pieces together. I started on the side near the bottom, leaving the bottom open to stuff the catnip in and that worked really well. 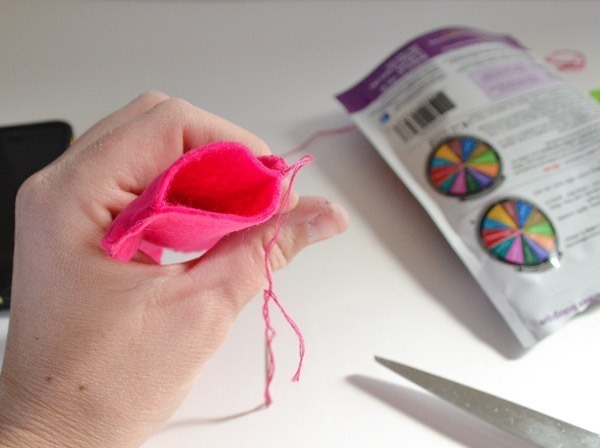 This is the bottom ready for stuffing. Using your hands you can squeeze the sides together and the bottom will open up. 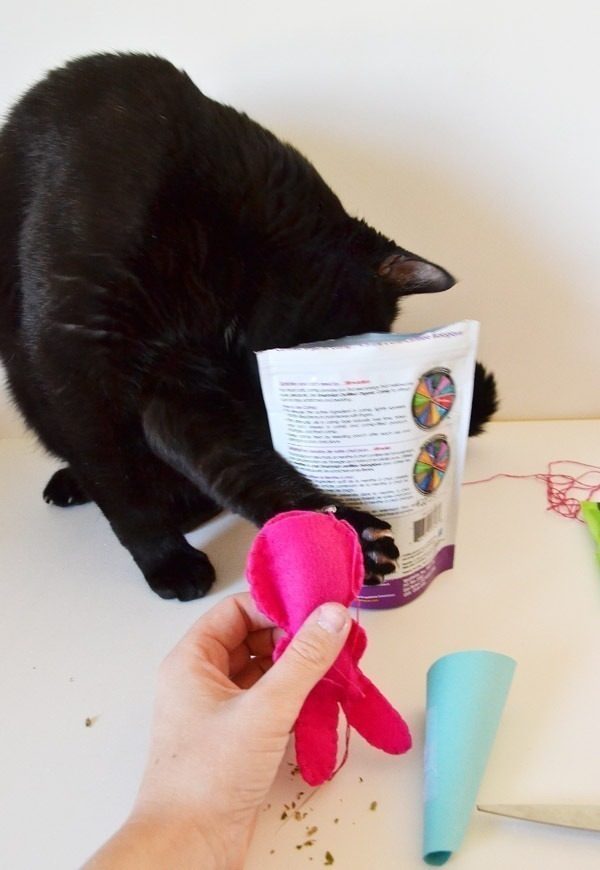 Put your catnip in either by hand or use a piece of paper to make a funnel. See that blue piece of paper? That is my funnel. She the cat pretending to be cool but totally about to jack my project? I thought I had finally gotten all of the cats out before doing this but turns out as soon as the bag of catnip opened this guys popped out of the yarn box under my table with eyes wide. He got to stay because trying to remove him his crazy high ass more dangerous to move than trying to avoid him! 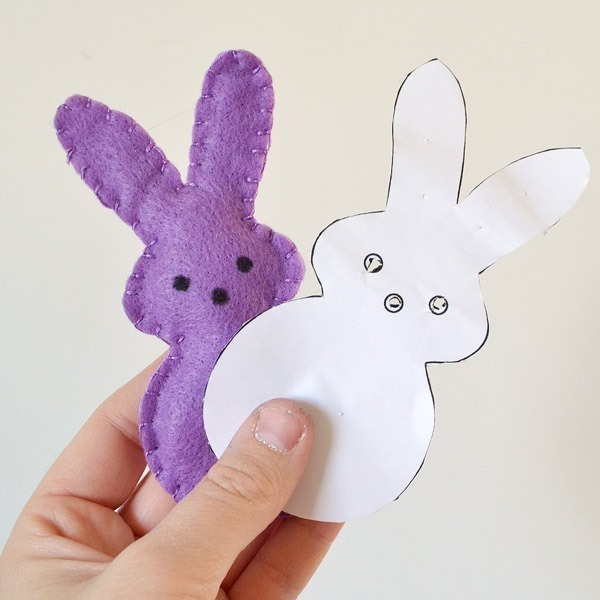 Once stuffed to your liking, continue the blanket stitch around the bottom and close your Peep up. To finish up, poke holes in the eyes and nose area of one of your pattern shapes. Place evenly on top of your felt bunny and make dots through the template onto the fabric. You can make the eyes and nose larger after you remove the pattern but this will help you get better placement than simply eyeballing it! 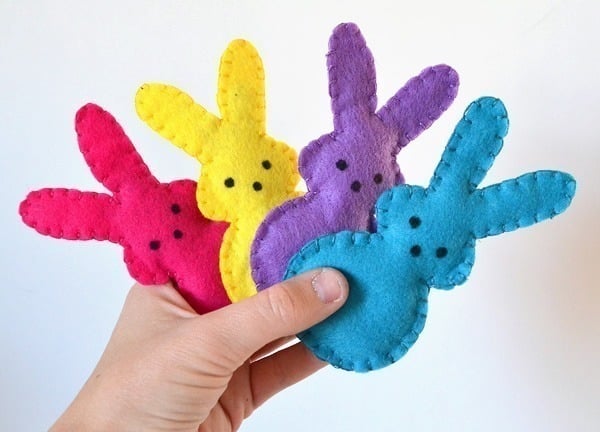 Standing in front of the felt at the craft store I actually Googled the colors of Peeps and try to find the ones closest because I’m kind of nuts like that! 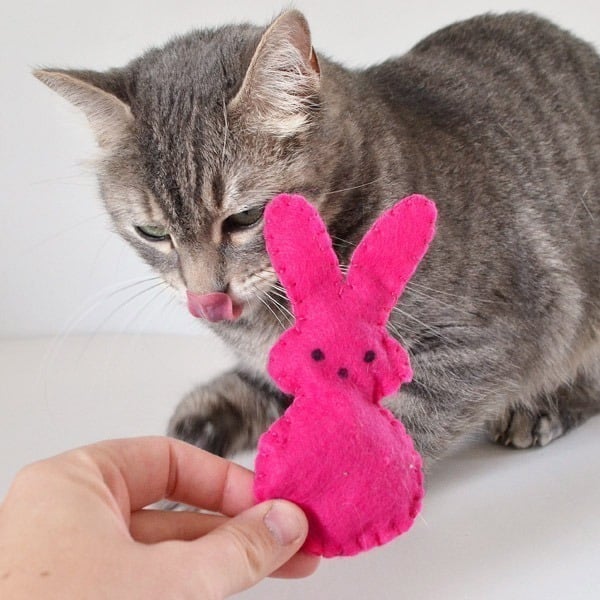 Since I have four cats I made four bunnies and each got a different color. 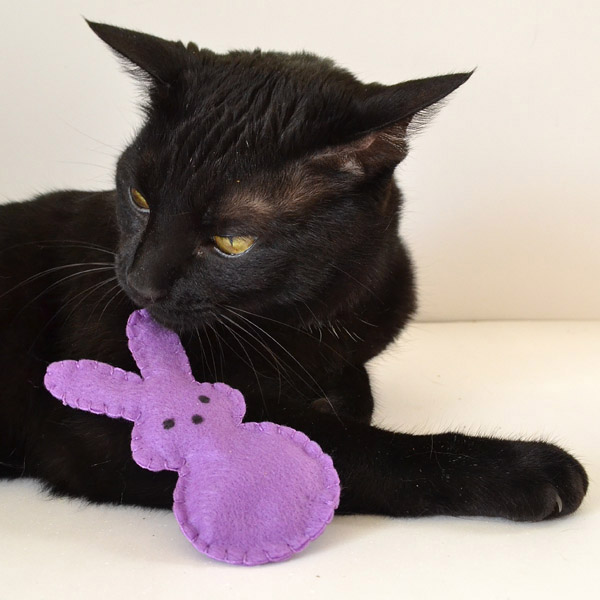 What’s funny is that they will play with their own for a few days before it becomes a free for all and nobody seems to care which one is theirs! 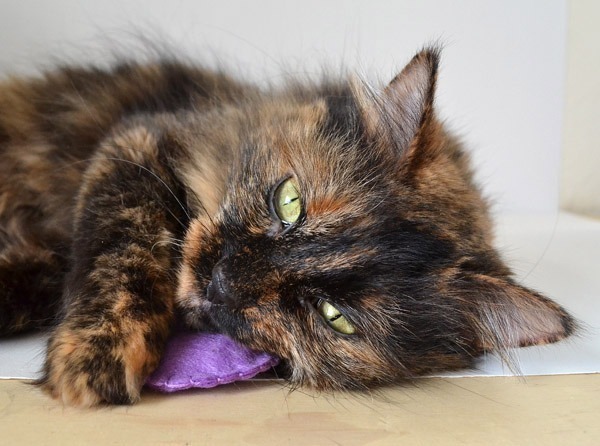 To make 4 of these I watched 3 episodes of Transparent on Amazon Prime so that’s practically no time at all! 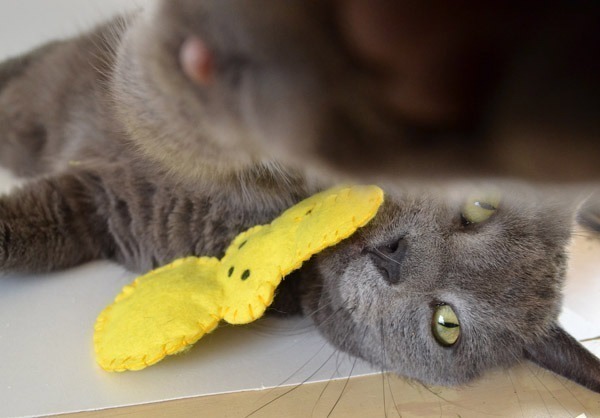 When you hand your toys over remember, catnip can make the kitties a bit crazier than usual, but that’s most of the fun!