Today’s post is kind of hard for me to write… you see up there is the super fabulous Miss Lucy. I love her so much and she’s an amazing dog. But Rob and I are going to have to part with her. It turns out she really doesn’t care for cats and, well, I have a whole mess of them. We’ve been waiting to bring them to South Texas to live with us in our new home, both really nervous about the whole transition. But after little miss showed us just how much she dislikes cats we realized that we can’t have both in the same home and we’d rather find her a good home on a good, positive note rather than having to quickly get rid of her after she injures another animal.

It’s sad and I’m crying right now but I know it’s for the best and Rob and I decided we’d rather find a good home for 1 dog than 3 cats. And Miss Lucy is great. She loves kids and other dogs so she’s going to make some family very, very happy but we’re going to miss our cuddle bug.

Before we even realized that this was going down I decided to make our gal a new collar. We normally buy her Martha Stewart collars because they are crazy cute but they are also really expensive. And there is just something a little (or kind of big in this case) flower brings making her look as sweet as she definitely is. So rather than buy, I decided to DIY, and as it just so happens, the process wound up being far easier than I expected! Hopefully when Miss Lucy finds her new home her new owners will keep her in the pretty things she loves :) 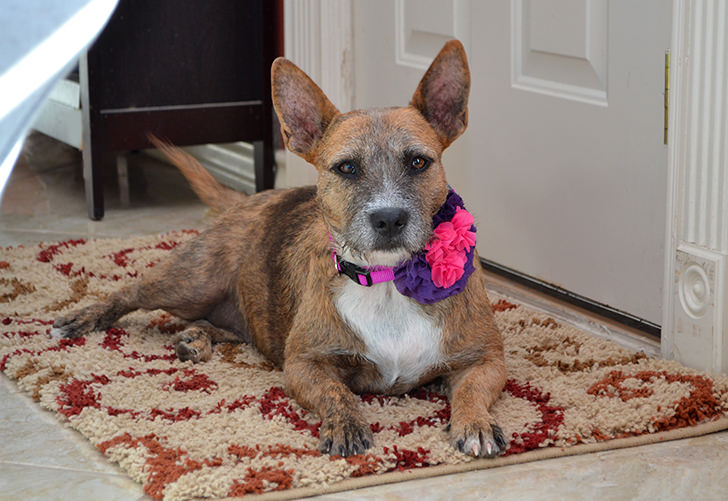 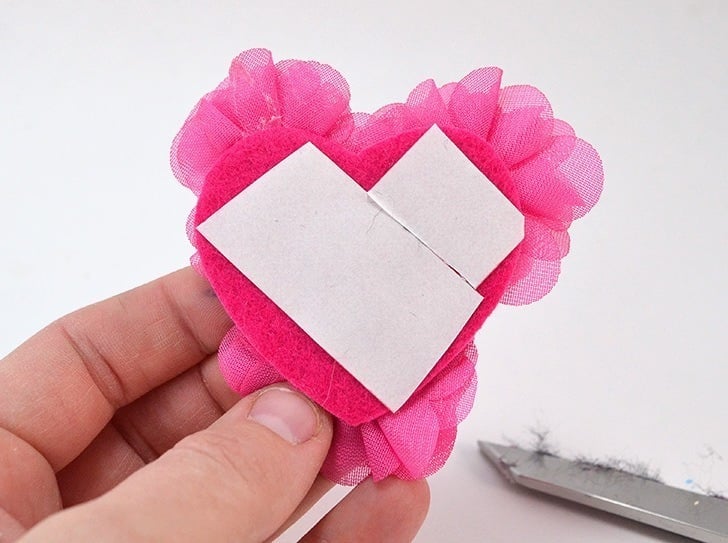 Lucy looks best in purple and we couldn’t find a purple flower that we liked very well. Instead we found this big but very simple purple flower that I added a little cluster of pink tulle flowers to from my stash. The big flower was around $1.70 with a coupon.

On the backside of the top of her new corsage I added Aleene’s Fabric Fusion Tape. Now I’m new to this stuff but I am such a fan after my very first go with it. This stuff is crazy strong. Crazy! I actually tore up fabric trying to get two things apart I put together with this stuff. It just wasn’t happening!  Now, you have to wait a few days for that kind of bond to happen, it would seem, so be ready to put your new collar up and away for a few days before your pooch dons it. But I’m getting ahead of myself… 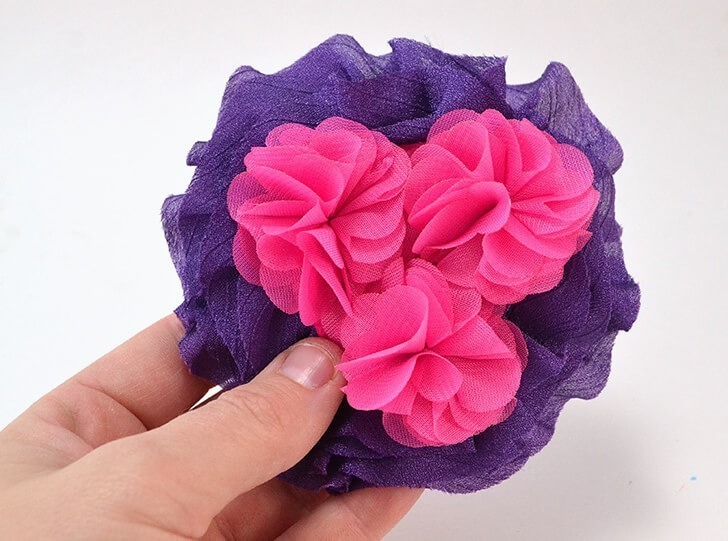 Peel away the paper from the backside of the tape and two pieces permanently become one. Nifty! 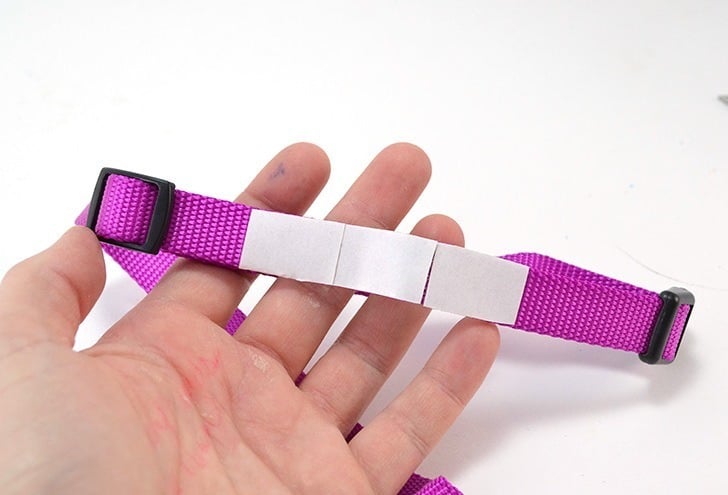 More tape is placed straight onto the collar. This one we got half off at a Super Walmart closing so it cost us a little over a buck, I believe. Super cheap! 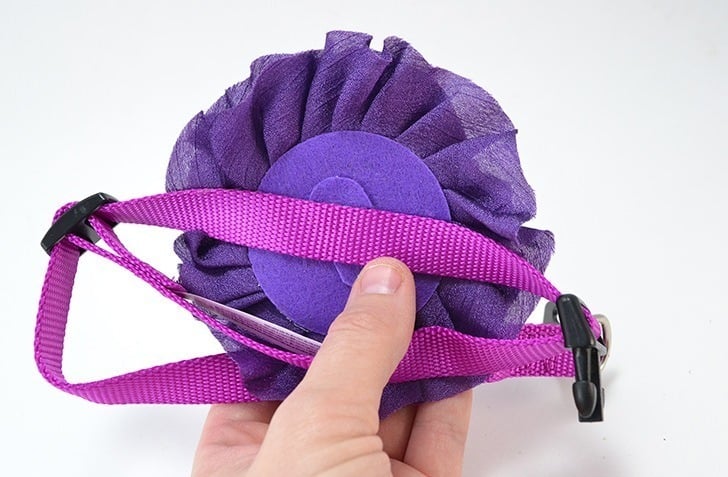 Apply the flower right to the collar after removing the paper backing from the tape.

Now, if your dog is crazy you might want to do a few stitches to really keep this guy on there. I know I said no sew, and I didn’t have to sew (and I think the majority of y’all aren’t going to need to, either) but know that this is an option if it’s needed. I’d just run through the flower with a needle and thread and wrap that thread around the collar over and over. Don’t try to go through the collar because it’s super stiff and you’re going to have a really difficult go of it by hand! 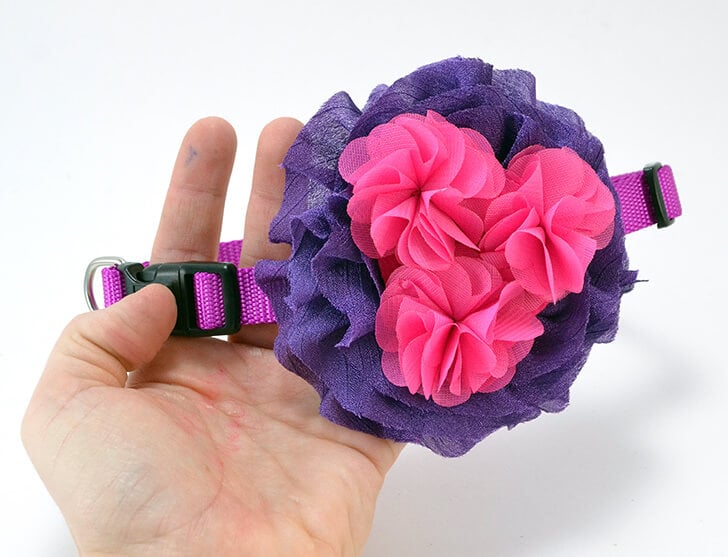 Now isn’t that so lovely? The flower is a bit bigger than most of what she’s worn for us and she kind of moved her head around for a while trying to get a good look at it on her neck but it’s already business as usual. 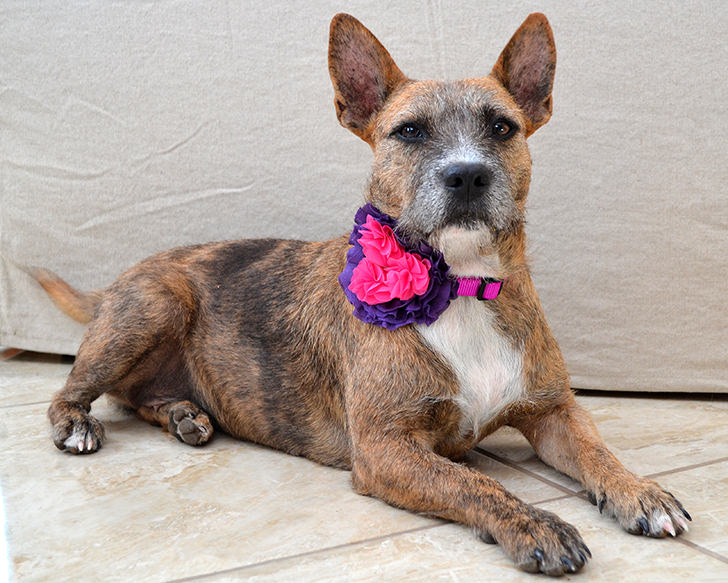 Well, business as usual until she and Ollie started to play and he started chewing on her new flower. There are a few puncture wounds in the flowers as a result, but what are you going to do?!?

Look at that statuesque gal. But you can still tell she’s a tail-y, tail-y wagger! Dang I’m going to miss her. 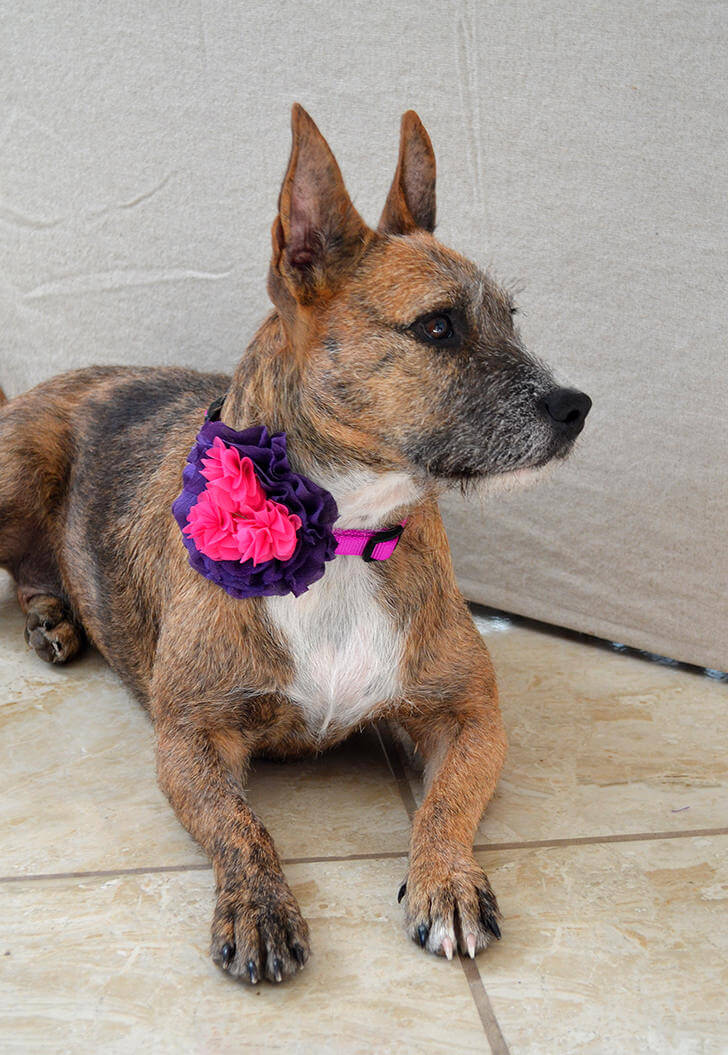 I'm a crafty cat lady with big dreams and an inability to sit still. I make it, I live it, I love it. Here at Dream a Little Bigger you'll find lots of inspiration for crafts, crochet, DIY, food, pet life and all things rainbow. Lots and lots of rainbows.
19 Shares
Pin13
Share6
Tweet
This site uses cookies: Find out more.