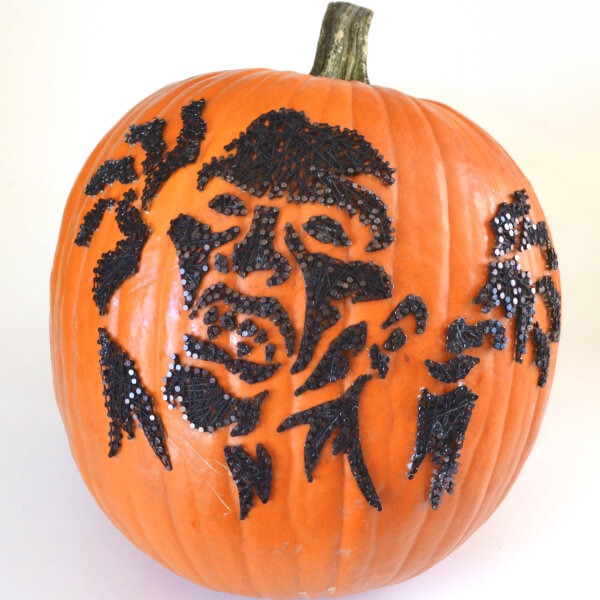 Today we’re going to snub our nose at carving knives and bust out a no carve, string art pumpkin! 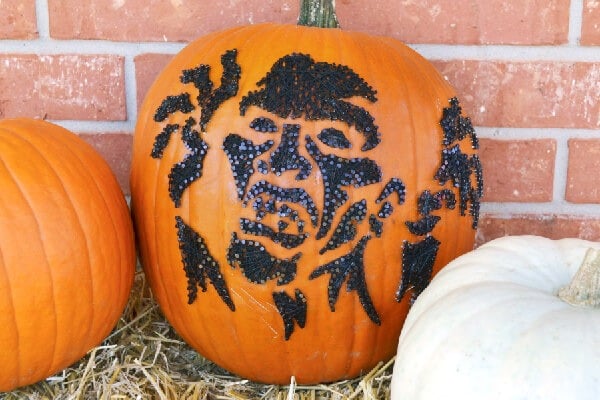 Every year I carve a good number of pumpkins. For some reason when I’m buying my pumpkins to carve and when I’m preparing all of my patterns and tools, I tend to forget just how much I hate cleaning out pumpkins. And I do mean HATE it. Add in the fact that I want to start pumpkin-ing up the joint as soon as they start selling them in September and that’s a lot of cleaning, carving and rotting to be going down in a month’s time. Last year I said – I WILL NOT DO THIS AGAIN NEXT YEAR!!! I will be more sensible and figure out some no carve pumpkins to quell my yearning for fancy gourds.

And I did. I’ve never made string art before which seems crazy because it’s so in right now. And since I already have 6 fresh pumpkins in this house (oh, my!) and my carving hand is itchy I decided to give this fad a try, pumpkin style. 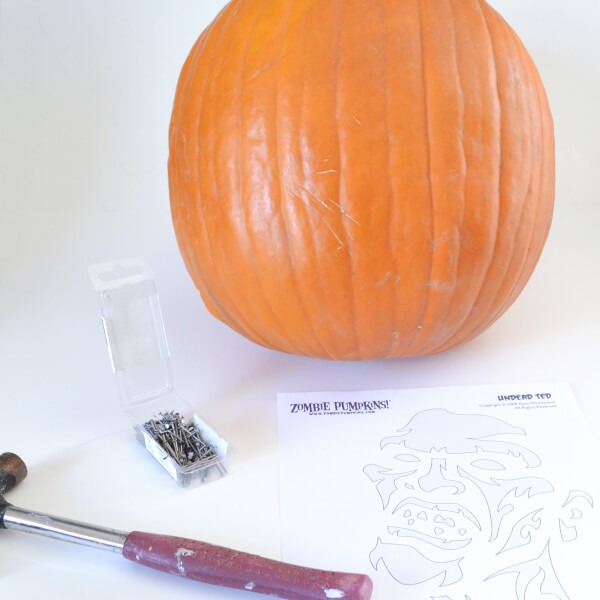 I really had no clue how many nails I was going to need for my pattern, but I chose one that, according to Zombie Pumpkins has the difficult level of “maniac” which was real, freaking smart. In the beginning purchased 2 packages of nails which was about 300 total. In my finished pumpkin with the zombie face and hands, I used 987 nails which was quite a few more trips to town than I’d like to admit. I know there were 987, because I counted them. 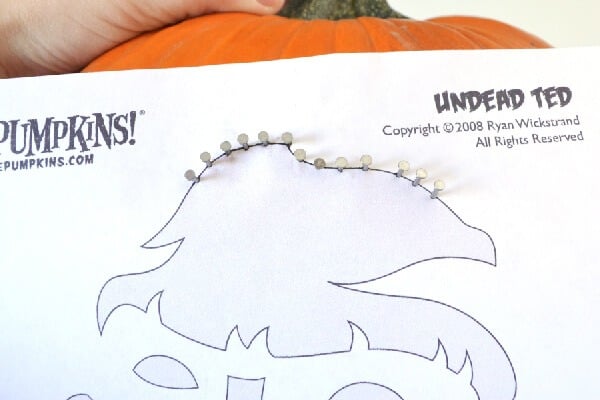 Using your hammer tap in your nails at intervals regular enough that you keep the shape of your pattern, but not so close that the heads touch. 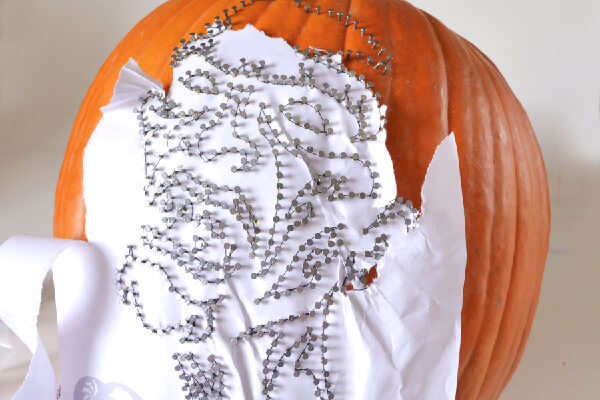 Let the pumpkin sit a few hours or overnight and then begin tearing the paper away. If you go immediately, the paper near the nails is wet and it doesn’t come away and you’re removing it with a toothpick. Not fun. 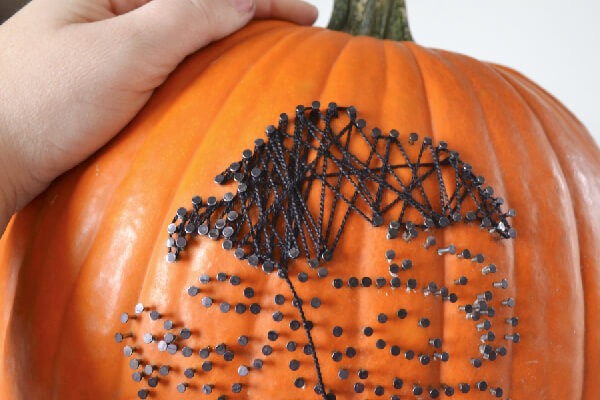 Take your thread and tie it onto a nail and begin wrapping that thread around like crazy.

You may notice that the nails in the pic before are silver and here they’re black. That’s because I painted them with a marker so they’d match better. Unfortunately it rubbed off while I was working so you’re going to be smarter and do this at the very end. 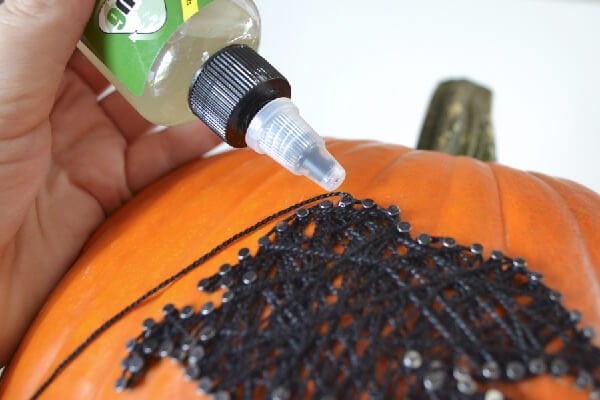 When you’ve gotten your shape crazy wrapped up, tie the end off on a nail. My knots were poor at best so I used some glue to keep them in place.

I repeated the process for the full face and both hands, and like I said before, I used 987 nails. And I colored each and every one with a black Sharpie at the very end.

You don’t have to use a pattern that is this detailed, in fact, Zombie Pumpkins – my favorite place to get patterns, has tons that aren’t nearly as difficult. While my pattern was quite involved, I love the end result. And since the pumpkin is no carve, it is still good right now and I was able to work on it as time permitted without worrying about rot. In fact, I worked off and on for about a week on this massive beast. 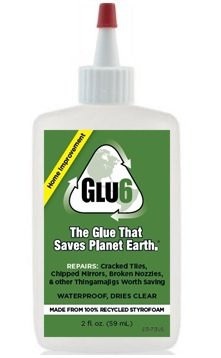 Oh, and before I go, a quck review! While making this pumpkin I tested out a new type of glue while working on this project. The lovely people at Nine Lives Products sent me some glue to try out and share my results. They sent me Glu6 original and Glu6 craft paste to try out. Now this glue is pretty special because it’s not only helping our crafty endeavors, it’s also helping to reduce styrofoam waste. Nine Lives Products is still a fledgling company but they’re doing what they can to keep styrofoam OUT of landfills.

You can barely see the bottle, but I used Glu6 Original to secure my threads and here are my quick findings. This glue smells so good, like oranges. Weird, but I really like it. It doesn’t do weird things and gunk up on your hands which is a big deal since I’m a messy crafter. It dries mostly clear but in areas where I really gunked it on it isn’t 100% transparent but in normal circumstances this wouldn’t be much of an issue, if at all.

I haven’t tried out the craft paste, yet but I’ll share my findings when I do. But until then, if you want to try a glue from a company that’s helping to keep styrofoam out of the landfills, check out Nine Lives Products.

I'm a crafty cat lady with big dreams and an inability to sit still. I make it, I live it, I love it. Here at Dream a Little Bigger you'll find lots of inspiration for crafts, crochet, DIY, food, pet life and all things rainbow. Lots and lots of rainbows.
144 Shares
Pin140
Share4
Tweet
This site uses cookies: Find out more.