This, my friends is your lucky day. Today you’re going to learn about a tasty food called bread cheese and you’ll also learn how to prepare and serve it! 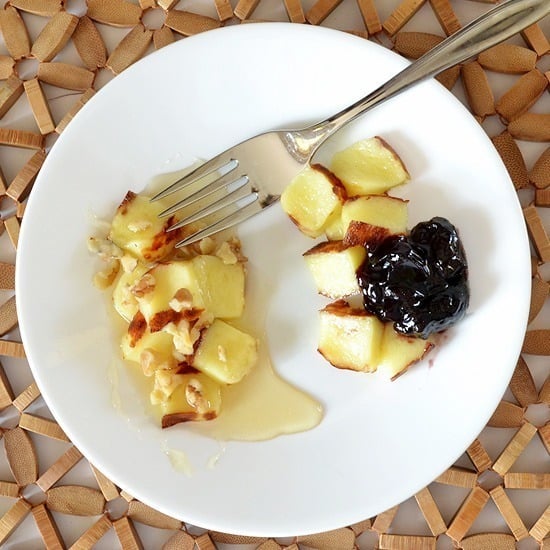 I love bread. Or, I guess I should say I loved bread – past tense. You see 18 months ago I was diagnosed as Celiac and my bread eating days were over just like that. And you have never met such a “bread-eating fool” as me. I’d eat plain old white bread with butter, sandwiches out the wazoo and there were always multiple forms of bread including croissants (oh, how I miss them), bagels, French bread, dinner rolls…

I quickly started buying and trying gluten free breads. And while I’ve found ones that I think are decent I haven’t found anything I think is a comparable substitute.

In comes bread cheese. Have you heard of this stuff? It’s a soft cheese that apparently has roots in Sweden that resembles bread. You can heat it to the point of being soft but it doesn’t melt. When served hot it has a texture that is similar to French toast. Oh, and it squeaks when you eat it. Just a little bit. But oh man is it tasty.

Bread cheese can be found at grocery stores with a good cheese counter or specialty grocers. I purchase mine at our little country grocery store oddly enough but I also have gotten it at Whole Foods. It is expensive, running around $12 a pound. The package you see above is just over half a pound and will last quite a while if only one or two people are getting after it. It is both salty and rich which means you’ll only want to make small servings for each person.

Simple Bread Cheese Recipe
You won’t find bread cheese just anywhere. This delectable delicacy of a cheese is worth the hunt. And preparing it is a snap!
Ingredients
Instructions

Alternatively I’ve heard that grilling the cheese in its whole form is also delicious. I’ll give that a go next time I have the grill going and report back.

Had you heard of or tried bread cheese before reading about it here? Is it something you’ll give a go?