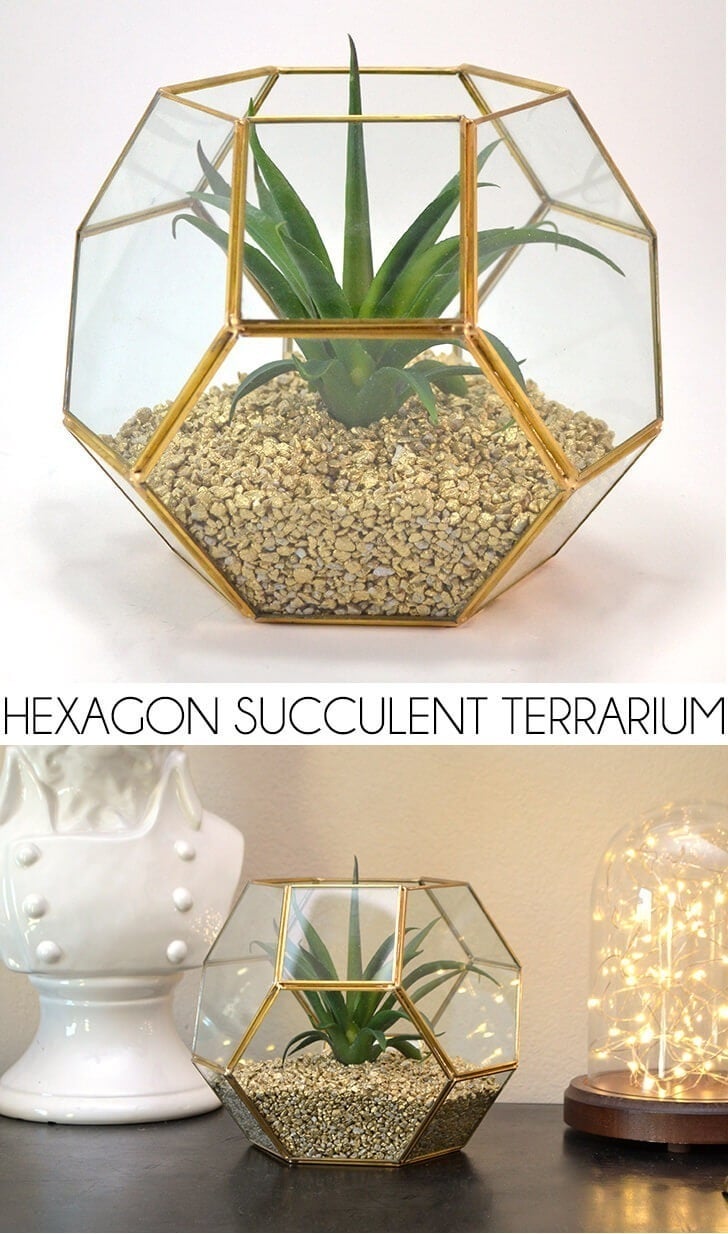 The master bedroom is coming along quite nicely. I’m super stoked about how well everything is fitting together, including my DIY creations. Not too terribly long ago I shared with you a wood shim starburst mirror I made and hung in the bedroom…

See on the very far left of that pic? That’s my empty hexagon shaped terrarium. I had snagged it up specifically for the dresser after glass was on sale half price at Hobby Lobby. I had seen this thing for the original price of $39.99 and I absolutely refused to pay that much after looking at the overall quality of the thing. I know they price things just so that they look better during sales, but dang! I got it half off and paid my $20, which is what it really should have been priced at to begin with in all honesty. 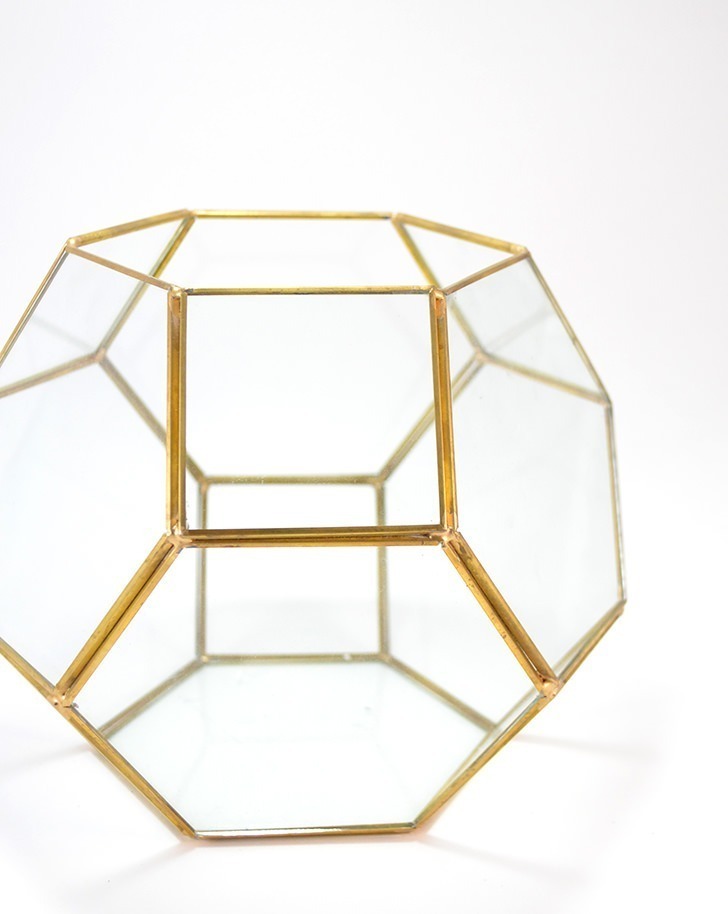 When I got it home I realized that it was poorly soldered and realized why the other one just like it had one of the panels of glass cracked. There was not going to be a real plant placed inside because there were huge gaps in the bottom between the glass and the metal that is supposed to be holding in that glass. What a mess! 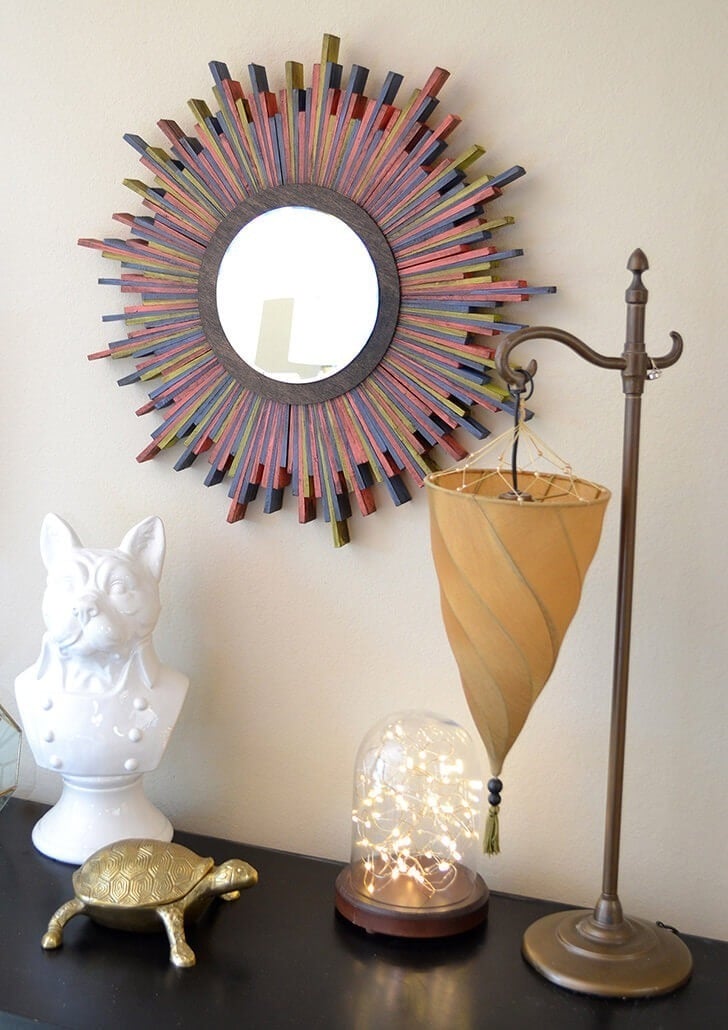 I wound up picking up a fake succulent on my next trip to the Lobby so I could actually use this thing like I had originally hoped for. I figured on the bright side my black thumb can’t kill a plastic plant, so there’s always that! But when I started looking at the rocks they had at the same display for filler I realized that there was a very big problem. That stuff was waaaaay too heavy. I could just see the entire thing cracking under that kind of a weight the first time it would need to be picked up.

So I put my thinking cap on for something lightweight that I could make work as filler. One of my first ideas was pumice but what I found was  humongous. Then I realized that fish gravel seemed to be a lot lighter than it looked like it should be. So when Rob and I went for groceries I ran over to the pet department and got a bag of white gravel. And the rest, as they say, is history! 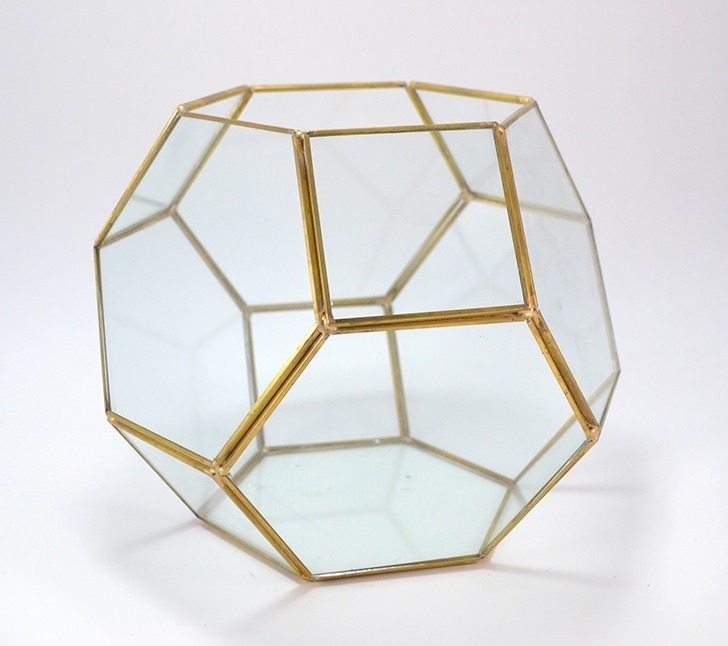 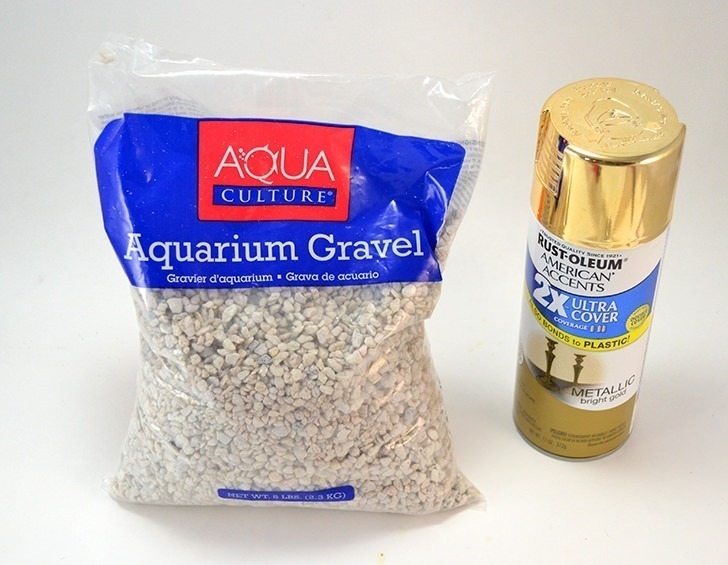 They have lots of colors of gravel so pick whatever base color you want to be visible in the gold. I went with white but I had also considered hot pink or black… 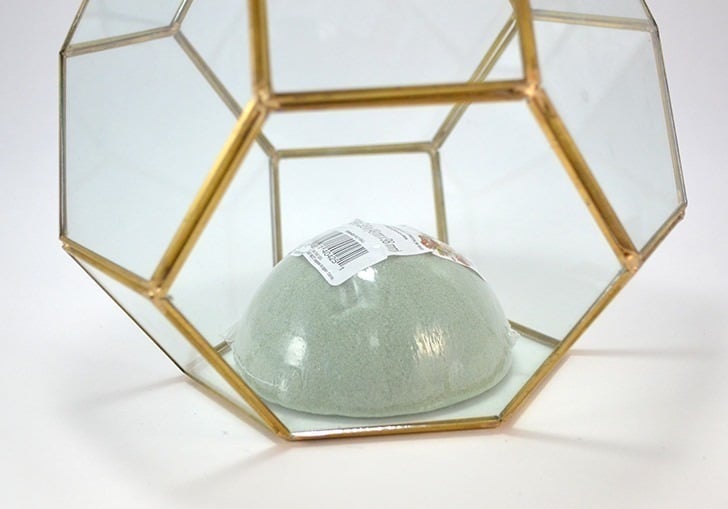 First make sure your foam sphere actually fits within the terrarium. 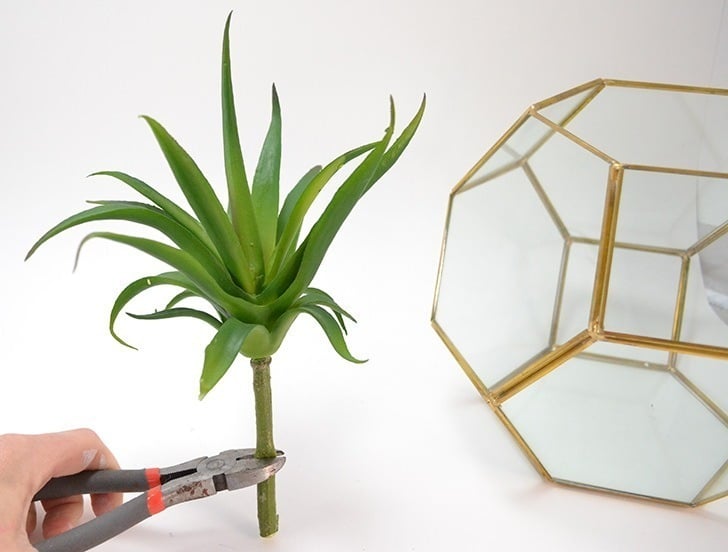 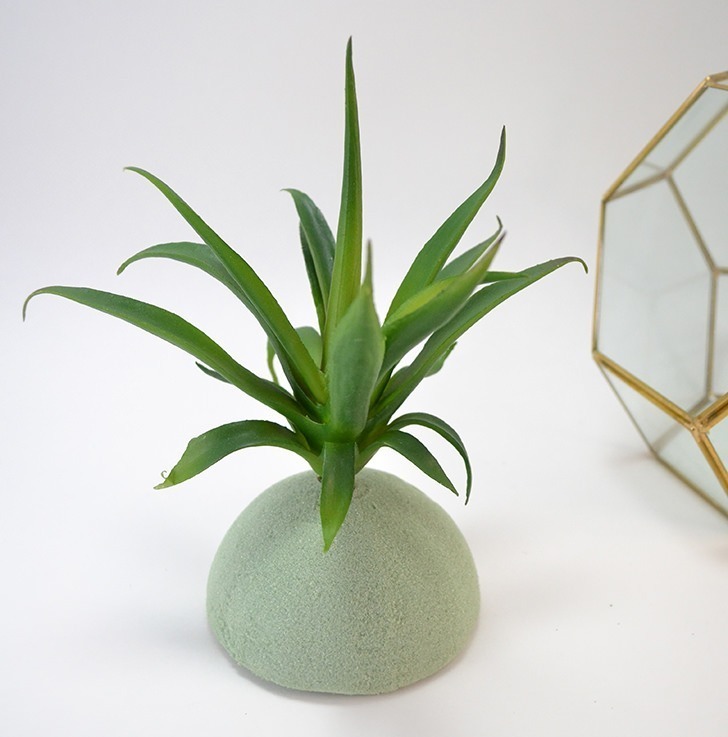 …and stick that sucker in there. 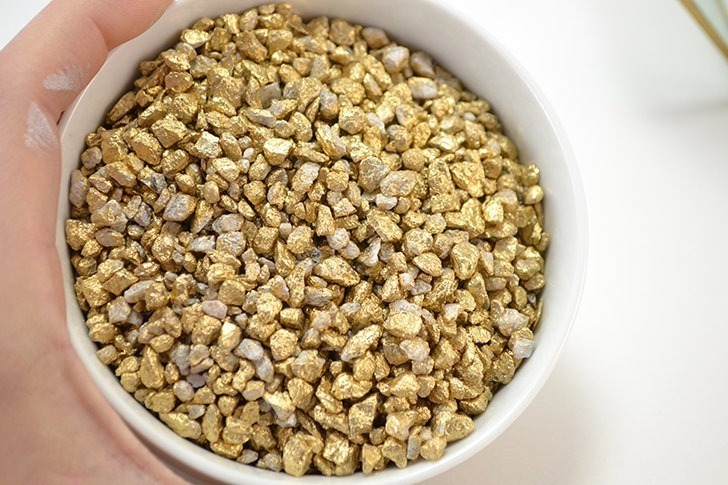 To color gravel set a large amount out on something like a big piece of poster board. Spray all of the gravel gold and give a minute or two for the paint to start to set. Take the poster board and shimmy and shake the gravel so that it turns all around and shows more of the original color. Do this several times over and you’ll get gold accented gravel. If you want straight up gold you’ll need to do this in much, much smaller batches. 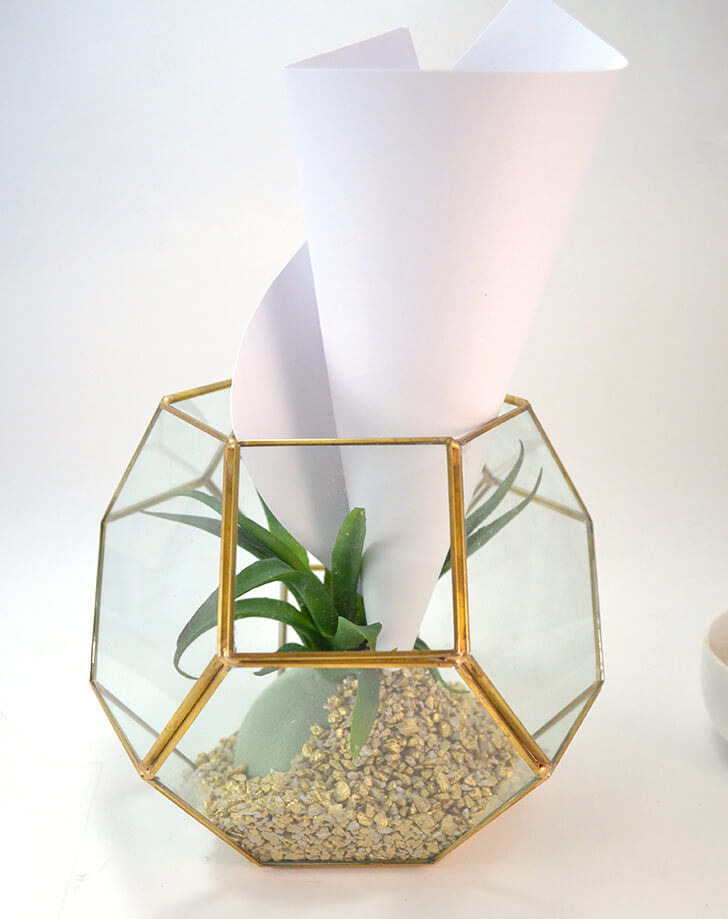 Now first go I got that dang gravel ALL in the plant. Ugh. SO I had to take everything out and pick the gravel out the center of the plant so the next time I made freaking funnel out of paper. That worked MUCH better. 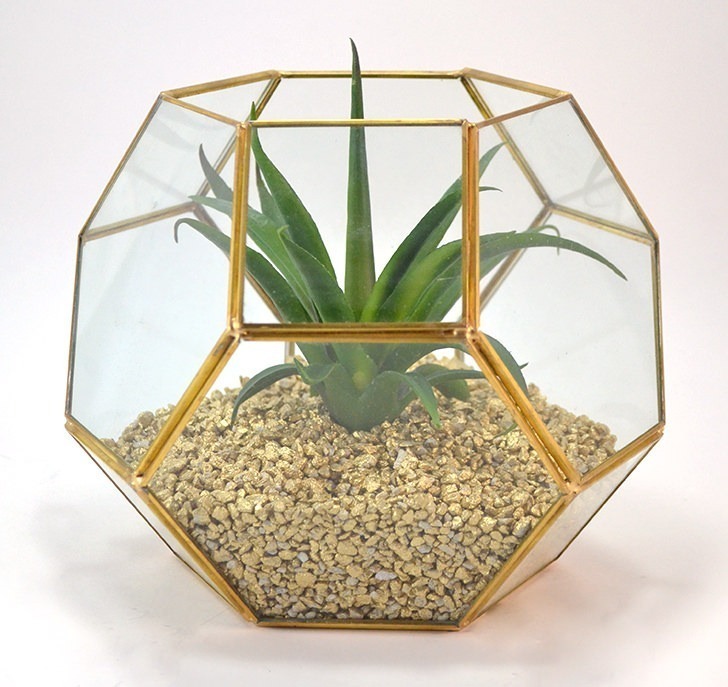 Now isn’t that simple and lovely?

And on my dresser, dang it looks so much classier (and alive) than it really is :) 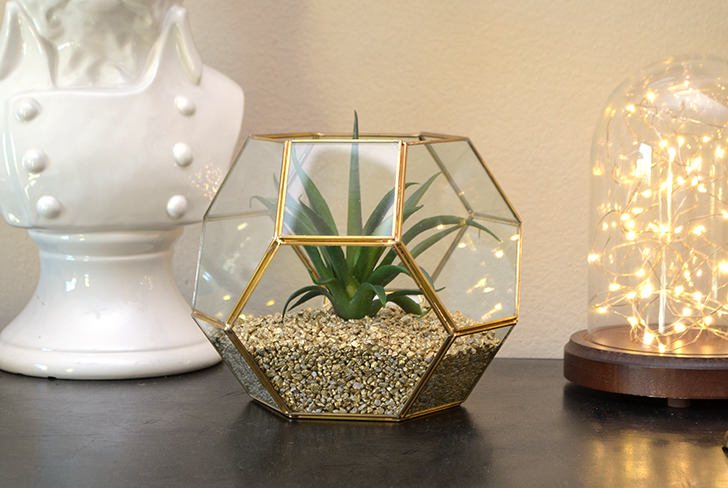