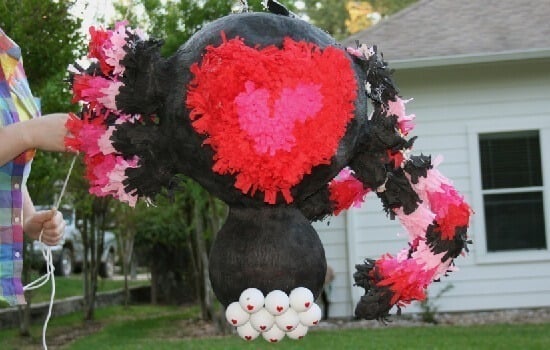 I grew up in West Texas where there was a piñata at just about every kid’s party. I don’t remember ever actually taking a swing at one, though, which seems pretty odd. Some years ago my sister and I decided that her boys needed to experience a piñata in all of its violent, candy filled goodness. Besides, we just might get a good junk shot to send in to America’s home videos and win 10K! (I did tape it just in case).

The boys, and every kid at the birthday party, had a blast. So last year, pre blogging days, I made a gigantic spider piñata for Valentine’s Day. She was a black widow with a heart instead of an hourglass, ping pong ball eyes and legs that were broken off in order to accommodate my sister’s massive amount of luggage. We named the piñata, Lovey Mc LoveLove and she was massively huge – her head was a normal 8 inch balloon, her legs were made of four long skinny balloons and her body was one of those jumbo punch balloons. 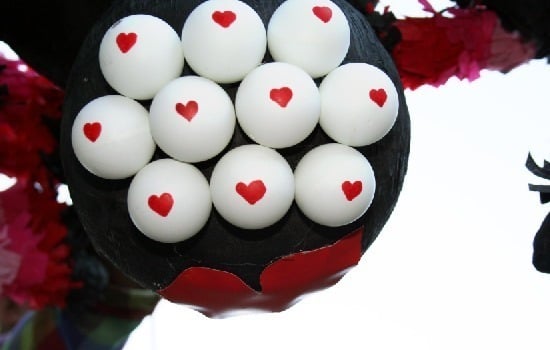 Making her took me probably 2 weeks of off and on work and I used the typical flour and water paper mache paste that most everyone uses. In the middle of this I got strep throat and went to the doctor who wanted to know why I had an awful rash with open sores on my hands. I explained that I had no idea but when I mentioned that I had been working with paper mache, she wanted to know if it had flour in it. I said yes and I was tested for gluten intolerance/celiac disease that very day. Turns out it came back positive and I was diagnosed with Celiac by a big ol’ spider.

This year the plan was to go a bit smaller on the piñata front and I decided to make eggs for Easter. After all, a balloon is basically an egg shape so this would be a slam dunk. Wearing gloves and working with regular paper mache wasn’t going to work out so I had to make a gluten free paste to use. It worked out really pretty well for a first attempt. And while the project was fraught with ups and downs, the boys got their piñata. 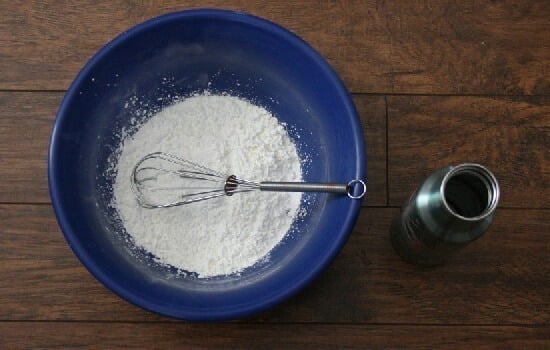 Take your corn starch and salt and dump them into a large bowl. The measurements don’t have to be perfect, just eyeball it and get it in there.

Next add a small amount of cold water and begin to stir. Keep adding water and stirring until you get a runny slurry. 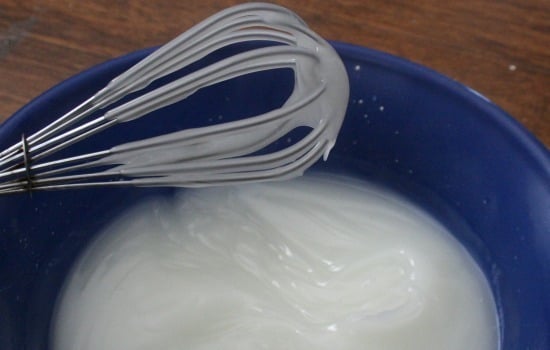 Now take your boiling water and pour it into your cornstarch and water mixture and whisk that stuff up. It will quickly begin to set up. I set a full tea kettle on boil and added water until it started to set. When you start to get a consistency like above. Set to the side to allow to cool enough that it won’t burn you when working with it and continue with the other steps below. 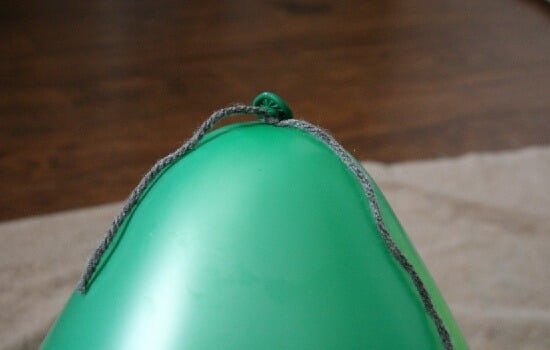 Blow up your balloons and tie a piece of yarn or decently heavy string around the balloon’s knot. 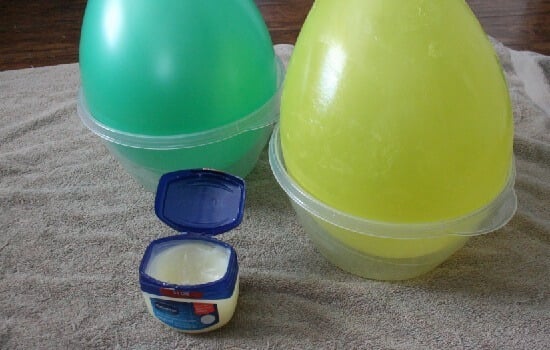 Next take your petroleum jelly and smear it all over your balloons. Not gonna lie, this feels a hundred shades of weird/wrong. But, this step prevents the mache from sticking to the balloons so well that you can’t remove them when you’re ready to start decorating. 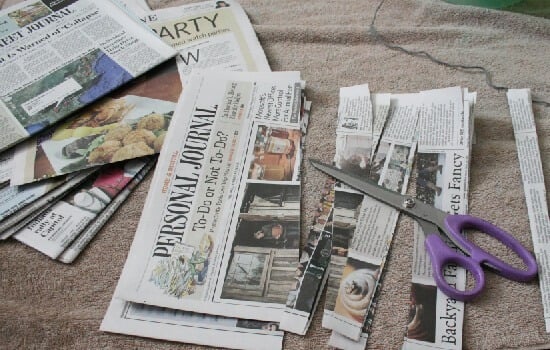 Grab your stack of newspapers and start slicing them up into strips. For my first round I like to make some that are skinny and some that are fat so I can pick and choose as the need for which ever arises. When I’m on to my second and third layers, I’ll use all fatter strips (1.5-3 inches) so that the work goes much more quickly. 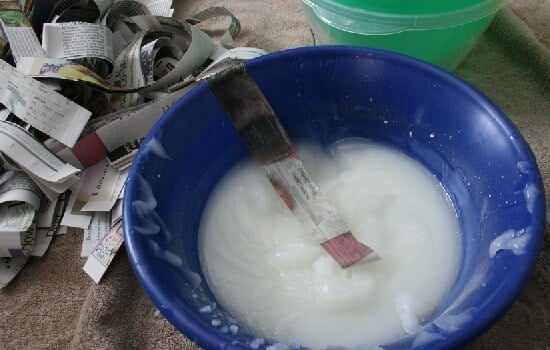 If your paste has cooled enough that it won’t burn you, it’s time to proceed. Take your strips of newspaper and push them into the paste. It is warm and feels incredibly awkward at first, but you’ll get the hang of it.

Take each strip and run it through your fingers to remove any excess paste. It takes some practice to keep your strips from totally falling apart, but a couple in and you’ll be a pro at it. 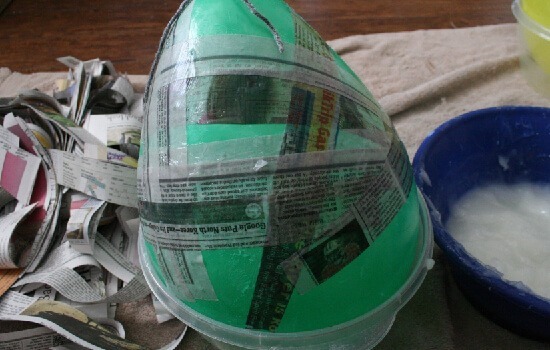 Now normally it would make much more sense to mache these suckers up while hanging from the yarn you attached earlier. But the truth is that they spin and I was having a hard enough a time getting pictures as it was with my hands all goopy.

Take your strips and place them randomly in as close to a single layer as possible. Be sure to overlap, though. If you go all in one direction, the paper mache will be weak in the end, which translates to a piñata that is TKOd after round one and that’s no fun. Kids gotta earn it! 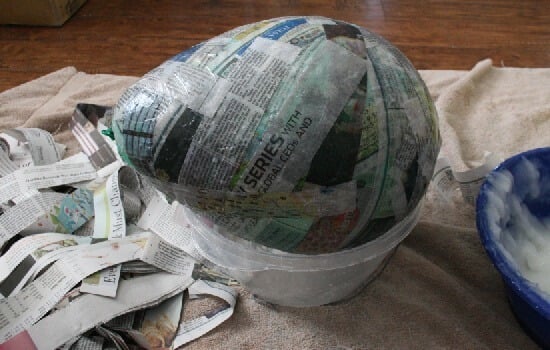 Continue working around the balloon and take a peek to see if you see any of the balloon peeking through. Patch as necessary. Also note, that as your paste cools, it will continue to thicken up a bit but it shouldn’t cause a problem. 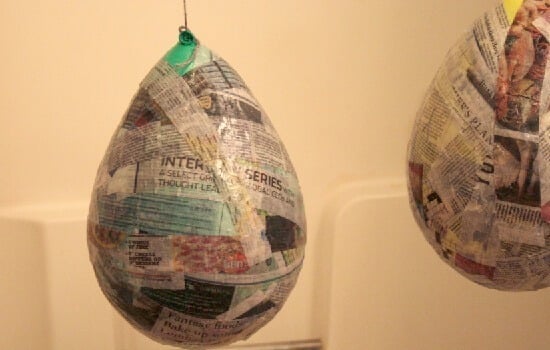 Allow your pinatas to hang so the first layer can dry. This can take a day or so under normal circumstances, but if you can really speed up the process by putting a fan in the room with them.

Now here’s where things started to go majorly downhill with this project. I had these guys hanging up in the bathroom on the shower rod and I was so scared that one of them was going to pop right by my face while I was in there. Like totally freaking out over it. I had to move them to another room so I could shower and as I pulled the curtain back, I heard a pop. Crapola.

Unfortunately, I had only made two and I wanted to have two finished so this really jacked up my plans. But as long as I had one, things were cool.

The next day when fully dry take your piñata and lay on 2-3 more coats of mache. You can put them on and let each one dry, or you can go all out in this one go. I went all out. 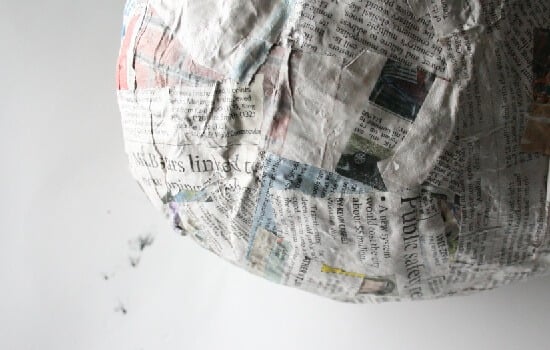 Again I needed to shower so I put the piñata on the floor propped up in a bowl in the guest bedroom with a fan pointing at it. After I showered I figured I should wait for the humidity and forgot about my piñata totally. I’m laying in bed when I hear a pop. What the heck? Russell comes running in to say that while napping on the guest bed he woke up and for some reason leapt off the bed and right onto my piñata. I sat in bed and cried.

But when I finally went to check on it I found that although the balloon was gone, the piñata only had a massive dent in the top of it going in about half of its height. But the good news it was still damp and pliable, so I was able to jam my arm in there and pop it back out. Unfortunately the final results were incredibly bumpy, but to be honest, I wasn’t about to start this project over again any time soon so it was good enough!

It’s a good idea to give your piñata a few days to dry just to be safe. Also just to be safe, keep it off the floor! I’ll be back in the a.m. with directions on how to fancy this ugly thing up and turn it into a beautiful piñata!!! See you then :)