I lose things. Like, constantly. So when I lost a black fake pumpkin Rob and I were hardly surprised. We looked EVERYWHERE. Or, at least I looked everywhere and assumed Rob was helping :) But apparently everywhere doesn’t include the trunk of my car. Or maybe it does. That thing is black and it gets dark up in there. Perhaps it was accidentally and quite perfectly camouflaged. You never know!

Every time we went back to Michael’s I would dither about whether or not I should buy up another black pumpkin but, ultimately, I’ve decided to be better about spending and would refuse. I was so excited when I accidentally popped my trunk instead of the gas cap and HELLO BLACK PUMPKIN!

I literally ran and put that sucker in my office quick as all get-out and I painted turned it into one super tricked out galaxy pumpkin that I then got after with my cordless drill and turned into a galaxy jack-o-lantern and I love it. And Ellen, Rob’s Momma loves it, too so we’ve got a consesus. This sucker is awesome. Want to make your own? It’s really just like making Galaxy Eggs I made last year but on a bigger scale. Plus you can light up the galaxies from inside which makes it even more awesome in my opinion! 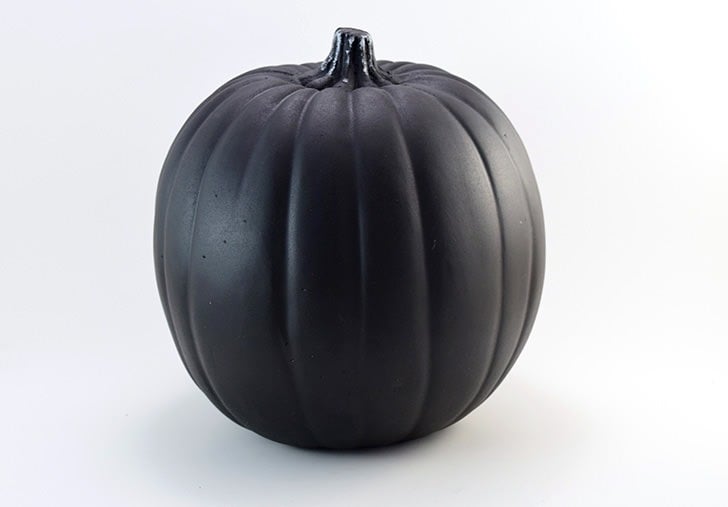 I strongly suggest starting with a BLACK pumpkin because they do really well to NOT have light shine through the foam part. 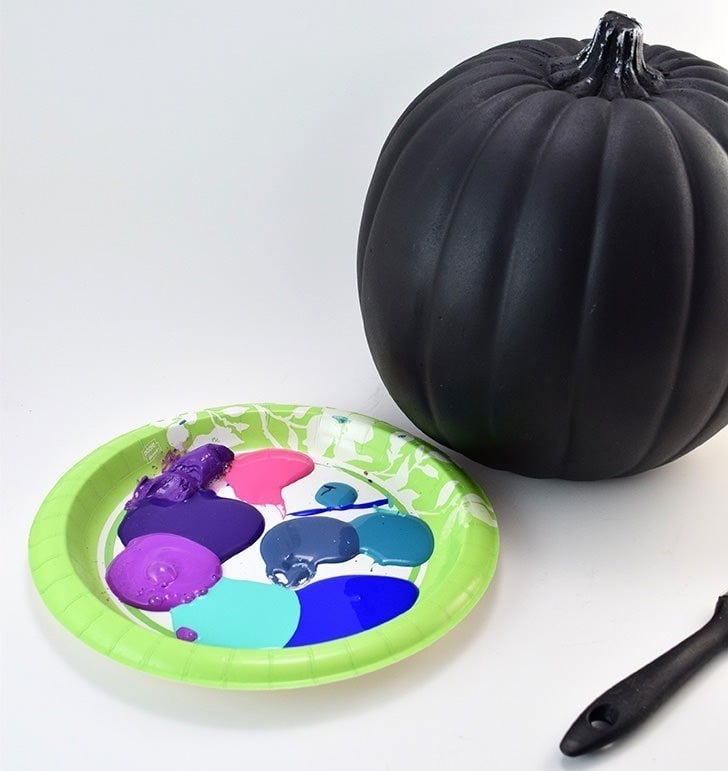 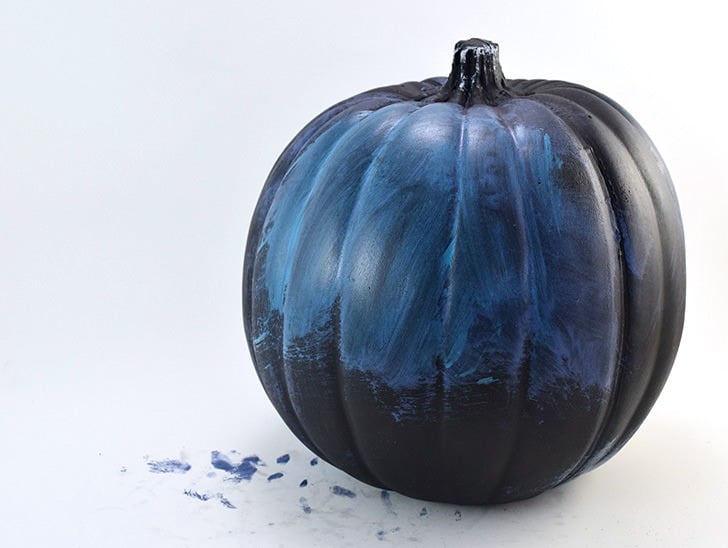 Brush on shades of your blue onto the pumpkin, rubbing it on so that it’s not totally opaque. An old brush that is going to hit the trash can soon works really well for this. 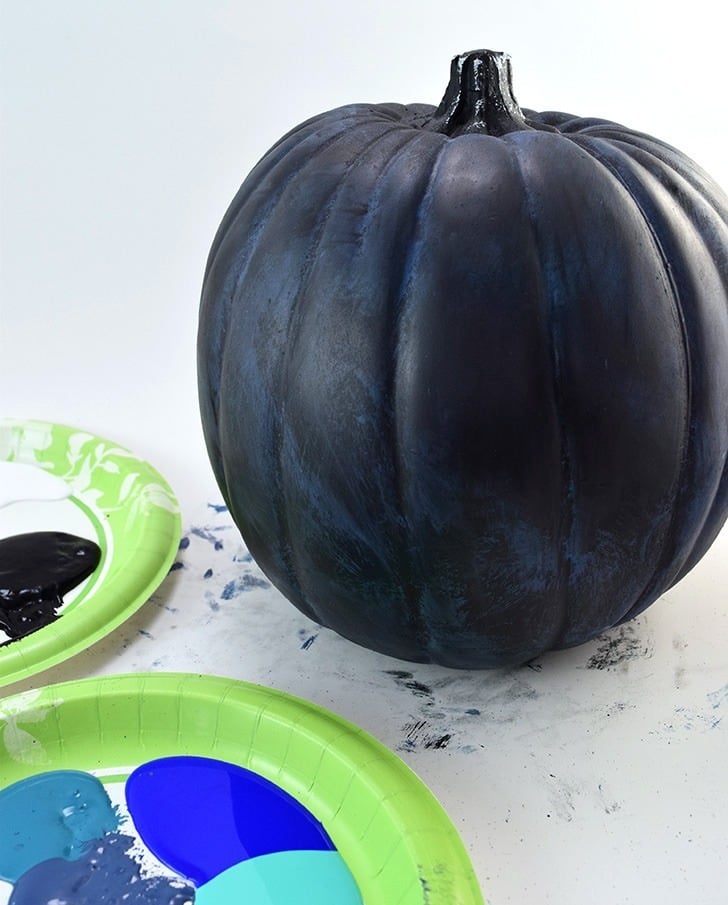 Go over the blue by dabbing black paint here and there and use a paper towel to rub it in and dull the blue without totally covering it up. 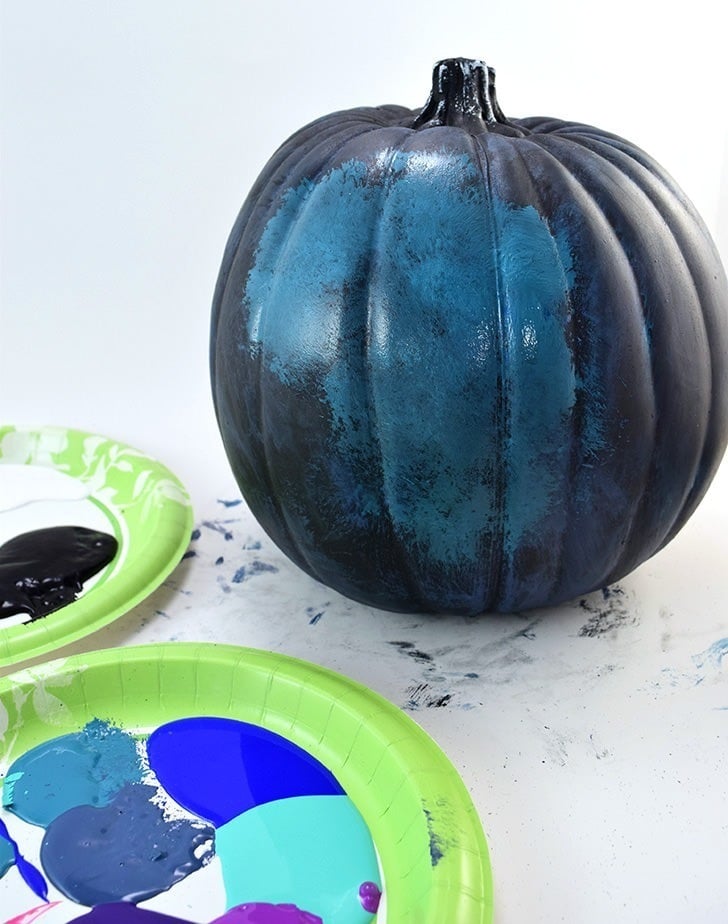 Make galaxies around the pumpkin by first daubing your darkest blue color and working up to a lighter blue or teal. Don’t brush it on, daub it. Make the darkest color the biggest shape, making each color smaller and smaller as you go. The colors don’t need to be perfectly within one another, feel free to daub outside the initial shape for interesting texture and design. Allow these colors to fully dry. 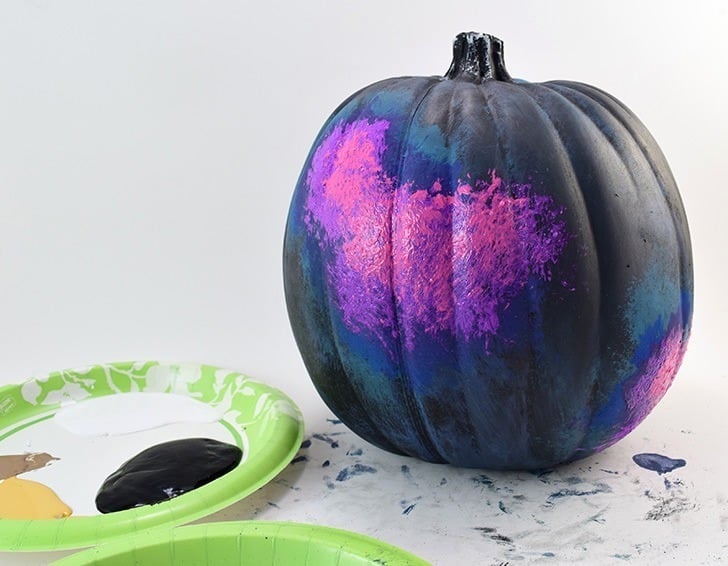 Continue with purples up to a bright pink, daubing wet on wet and then allow the paint to completely dry. 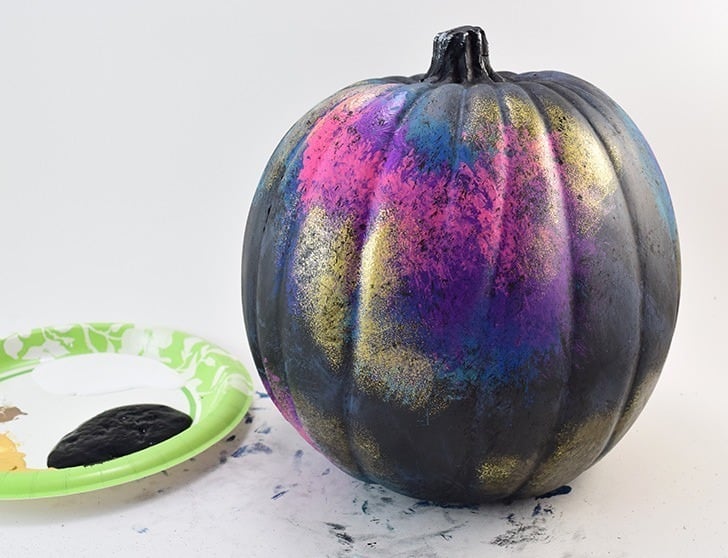 Using a sponge brush make daubs of gold around and on top of your galaxy shapes. Go over the entire pumpkin with quick,tiny dabs of black paint. 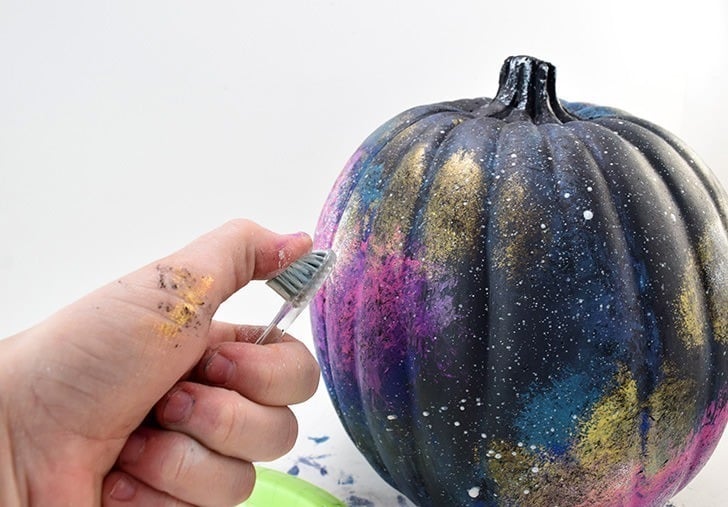 Thin out a small amount of white paint with water and flick onto your pumpkin using a stiff paintbrush, or an old toothbrush, to create stars. Allow to dry. 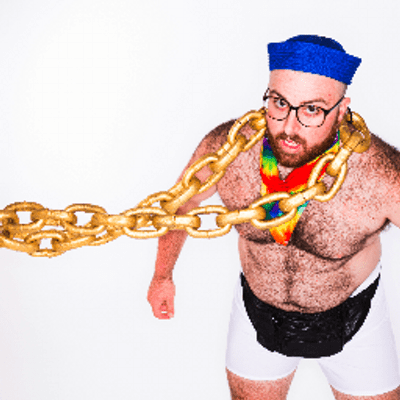 Next you’ll need to find constellations online to transfer to your pumpkin. FYI – that guy up there happens if you search for images of Ursa Major and dude gave me such a giggle. :) 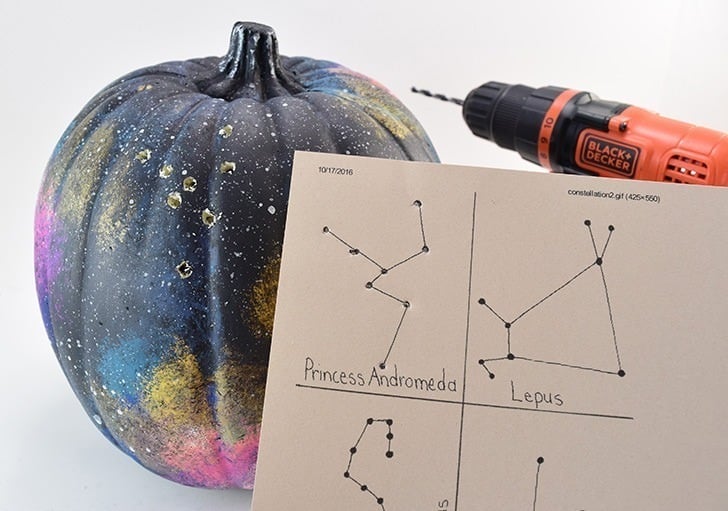 Once your constellations are finished around the pumpkin drill much smaller holes all around to create tiny pinpoint-like stars. 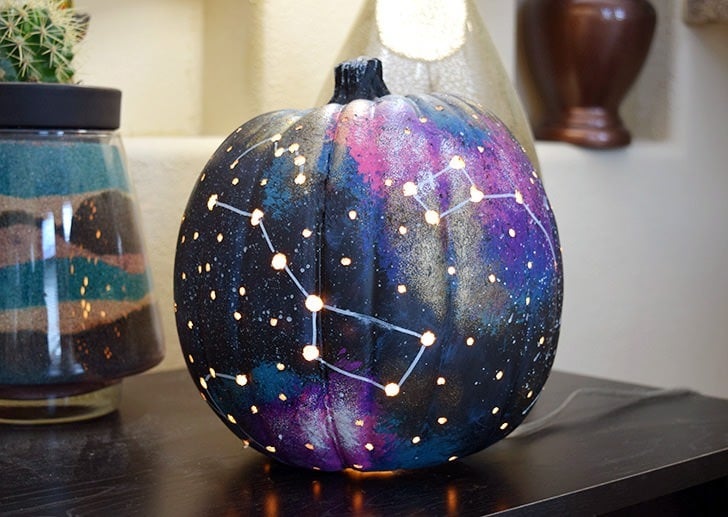 Drill a large hole into the bottom and shove Christmas lights up inside and this galaxy pumpkin becomes the most illuminating galaxy jack o’lantern.

Take care to use the appropriate lighting to keep your pumpkin fro getting too hot. I used a candelabra base and mine isn’t going to catch fire anytime soon, but it gets too hot after a while of being on. LED Christmas lights are a much better option for smaller pumpkins, for sure.

Now what do you think? Is this every bit as awesome as the galaxy Easter eggs? Or maybe is it even more awesome? Since this sucker lights up I’m going with MORE AWESOME! :) 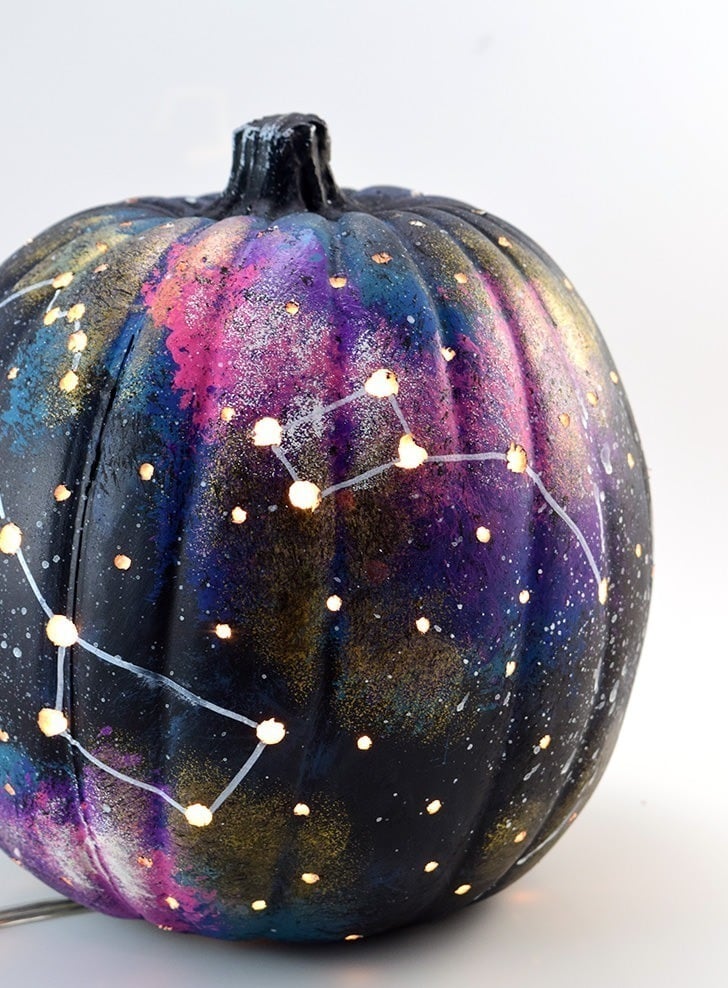