So here’s the deal… it’s super late at night and Rob and I are out and about and my stomach is upset. I’m whiny and a bit upset about the whole thing because we’ve been driving around while I’m nauseous and that is just about one of the worst feelings since I get car sick on a good day. We’re almost home, almost home,  and I beg Rob to stop at the gas station to run in and grab me a clear, fizzy drink to help settle my stomach.

He pulls up to the back of the gas station nearest our house and points for me to lock the doors as he’s walking inside, which I do. When he grabs onto that door handle and pulls nothing happens. It’s locked. Well crud! He signals that he’s walking around and I’m looking around realizing nobody is on this side and understanding that they must have known the door would be locked this late at night. Being “old people” we don’t normally go out at night to have known about this. Okay, so it was only 10:20-ish but dang, people I’m normally in bed by then!

As I’m looking around I notice a car creeping with four guys looking at me and I’m freaking out a little bit. I’m all by myself with the car running. But they keep creeping around the corner and that’s when I see it… they have their license plate covered up with a tee shirt. Oh, crap. 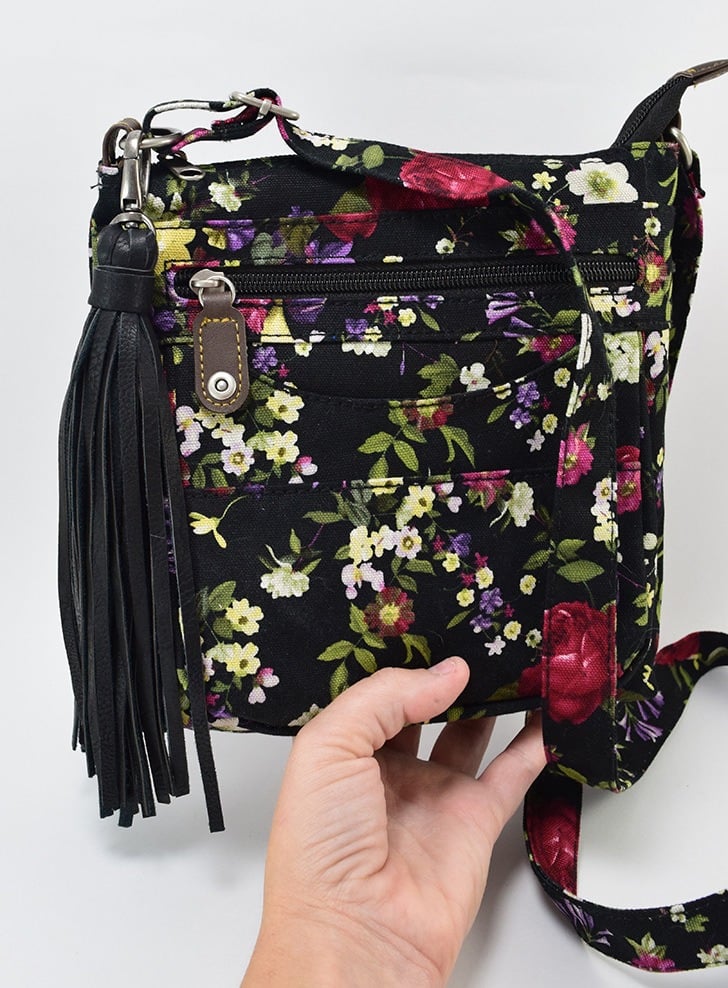 I look in through the locked door and see Rob standing in line staring straight ahead, right in front of where the robbers are going to be busting in. Oh, crap. My phone is dying and I’m freaking out but I text Rob trying to get the pertinent info in quickly without freaking him out AND getting it sent QUICKLY.  I hit send and then look up at him, holding my lemon lime soda and staring straight ahead at the line before him and I’m really FREAKING OUT. He never once goes for his phone.

While he is standing there and I’m sitting in the car watching through the back door, I see 4 guys bust through the front door quickly and aggressively and I can feel panic bubbling up in me. And then they all shoot toward the back of the store not the cash registers and I can feel the confusion setting in. What’s happening? I’m still staring at Rob, staring straight ahead while people around him are getting a little panicky, looking around, saying things to another when these four guys, loaded down with cases of Bud Light go running out the front door. And then people are jumping up and down and pointing at these guys. Customers are running out of the doors and pointing and there is my Rob, standing totally still staring straight ahead. And even though he’s not going to check his text messages I send him an alert that things are fine. I’m not even sure why, it’s not like he was worried at all :) 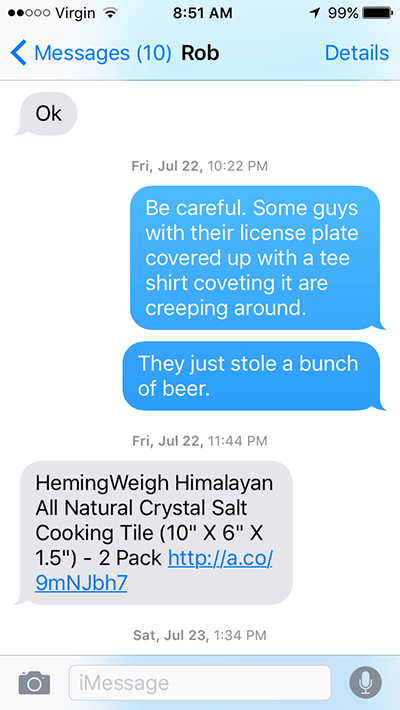 When he gets to the car I am freaking out. “How could you just STAND THERE?” He’s got his face all screwed up and he’s looking at me like I’m a moron. When I tell him that some people just robbed the place and, literally, had to run around them with their stolen stuff he has this totally blank look on his face. He thinks I’m screwing with him. The whole ride home he tells me to stop it. To quit teasing him. And I wound up laughing because it took FOREVER for him to actually believe me. I’ve since been trying to find proof of the theft online in the paper or a police blotter or something but have come up empty handed. And, to be honest, I have no clue AT ALL if he even really believes me.

But then I started to think, what if those guys came in with guns to rob the cash registers with Rob standing right there? And what if my phone had been dead and I couldn’t have even tried to get in touch with him. How awful would that have been?

So I tried looking for a charging cord I could keep on my person all of the time without having a cord hanging from my fanny pack, or something, and I found these awesome charging tassels and I instantly fell in love. 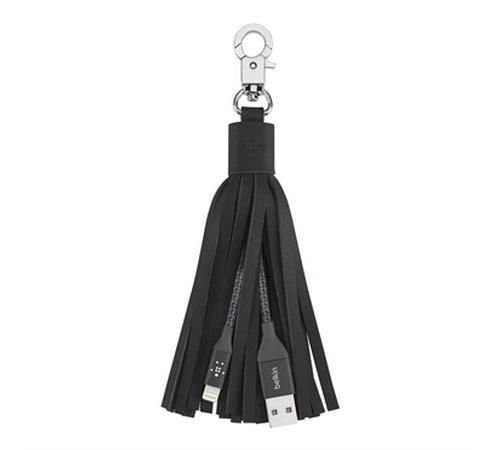 Now how genius is this little thing? But it seems like with the cords hanging so low and near the bottom of the tassel there would get junk in there, right? And when I went looking it was $34. That’s the crazy thing about Amazon, isn’t it? One day it’s $34 and the next it’s $19. Drives me nuts.

And though I loved it they could stuff that thing for almost $40. But then I thought about making my own, with a larger tassel so that the cord gets lost inside of it and, hopefully, stays clean. And so I set about the dang thing and made my own. And guess what? I freaking love it! It’s so cute on my little cheap purse and it works really, really well. I ALWAYS have a cord with me and with new cars having USB outlets and whatnot I can charge my phone any time. It’s pretty awesome. But let’s quit talking about robberies and outrageous prices and make this awesome little DIY phone charging tassel for your purse. 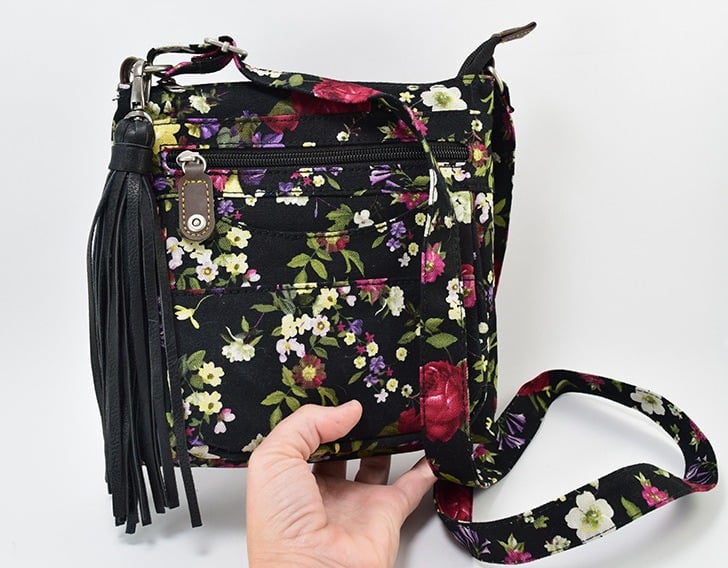 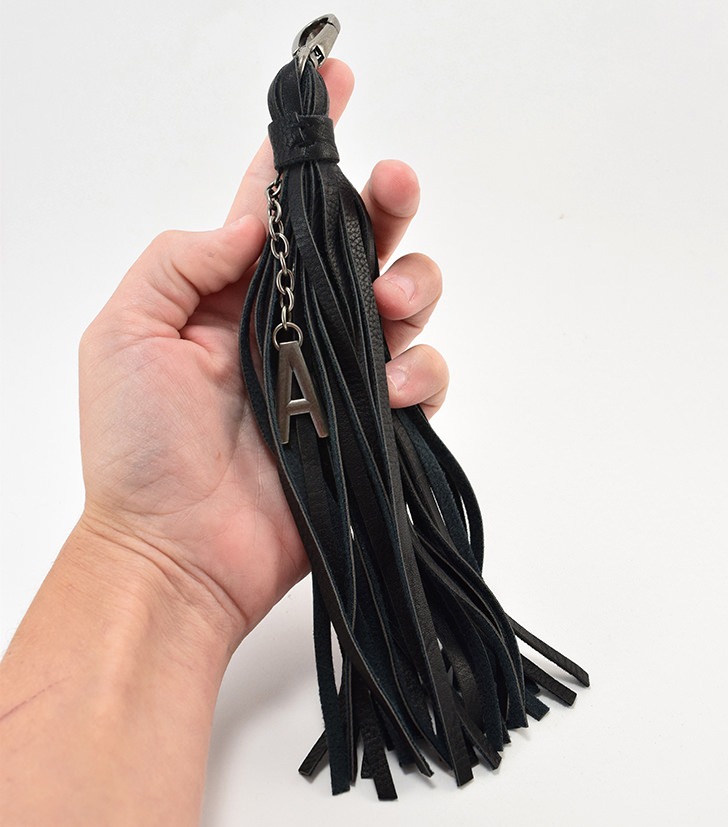 I first purchased some leather from Hobby Lobby but then I saw premade tassels all ready to go at Target for $6. I snapped up one of those babies instead, realizing before I checked out that the one I had selected had a “K”on it. Since there is no “K” anywhere in my name I went and traded it out for an “A”. Good thing I noticed that or it would have driven me bonkers!

And here is my itty bitty cable. You can find them for iPhones and others here: lightning cable or micro USB. 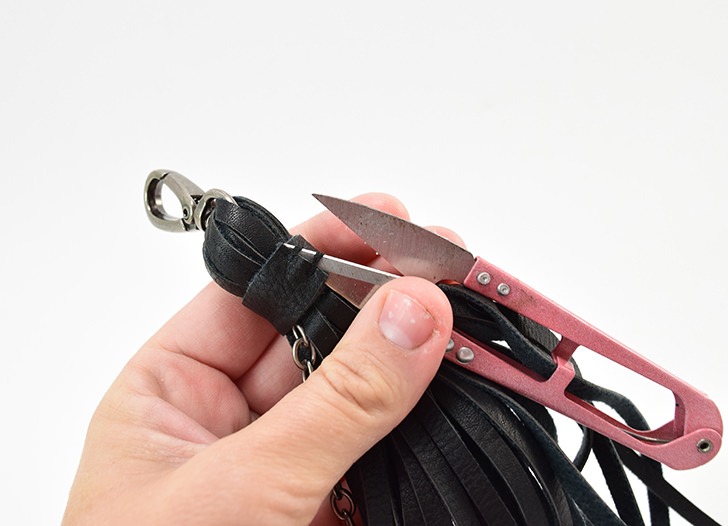 First we’ll need to carefully deconstruct our tassel. There is a strip that wraps around the tassel keeping the strands together. Using sharp nippers trim the string sewing it together. 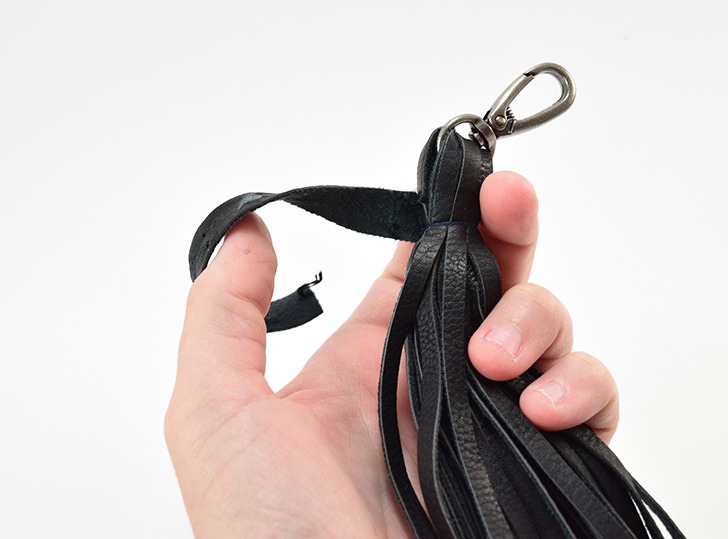 Carefully unwind that strip, popping away the glue as needed. Beneath there is a piece of string used to tie the pieces together. Snip that taking care to keep the tassel together as well as you can once it comes undone. 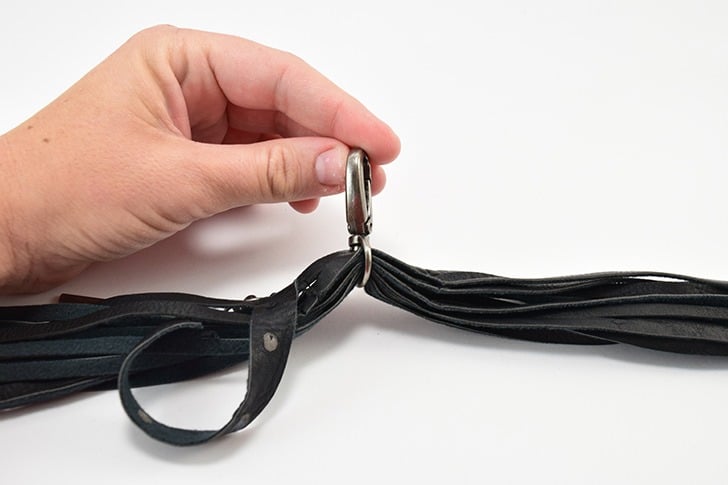 The tassel is basically pleather run through a large hook on a lobster claw type of finding. This is something you can easily duplicate yourself if you want to completely DIY up this project. Simply run leather strips through the loop gathering the centers of the pieces in the middle.

Run your short cable through the loop, bringing the center of the cable to the metal loop. 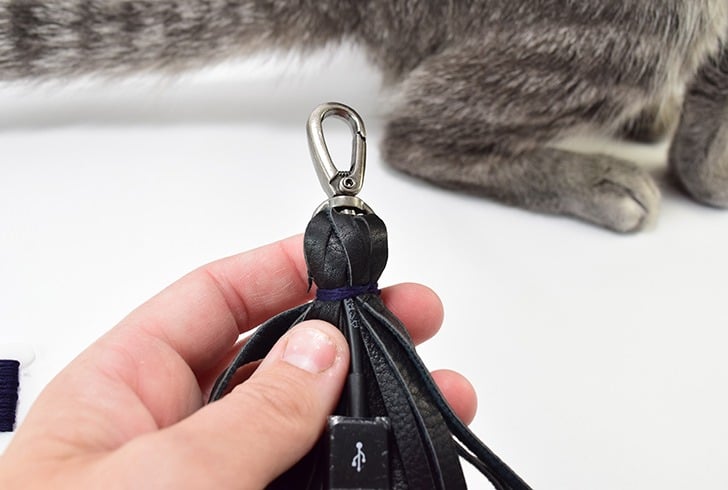 Using string bind the tassel back together. 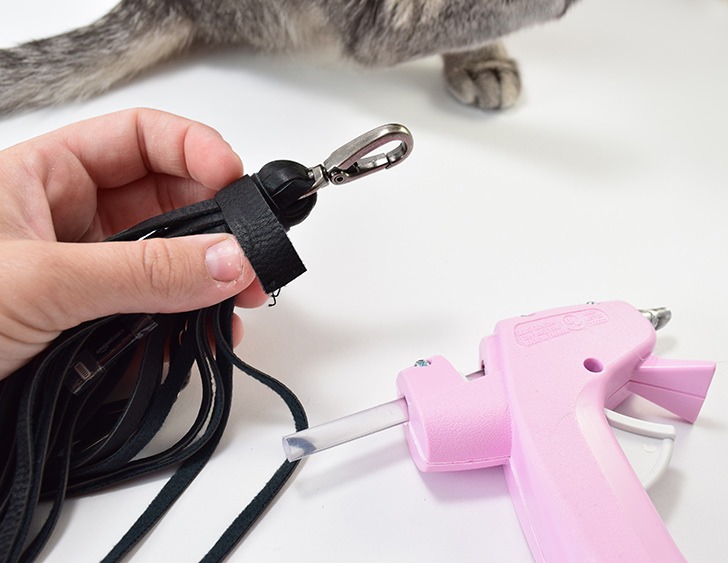 Wrap the finishing strip around and around your binding hot gluing regularly to help keep it together. 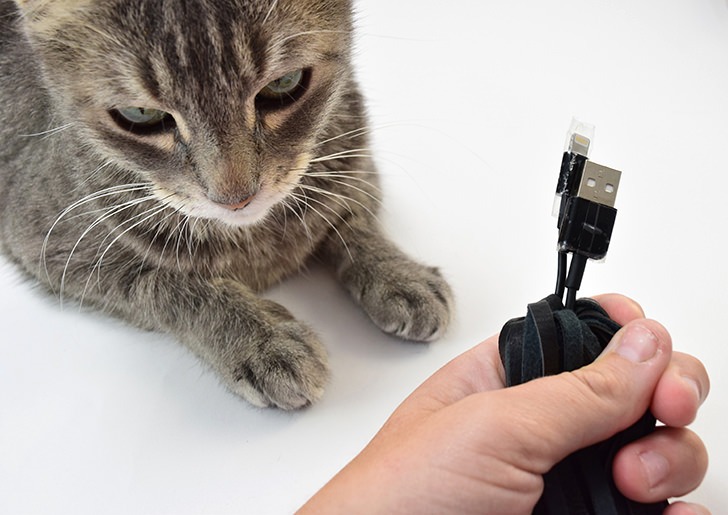 Twist the cables around so that they nest in approximately the center of the tassel. 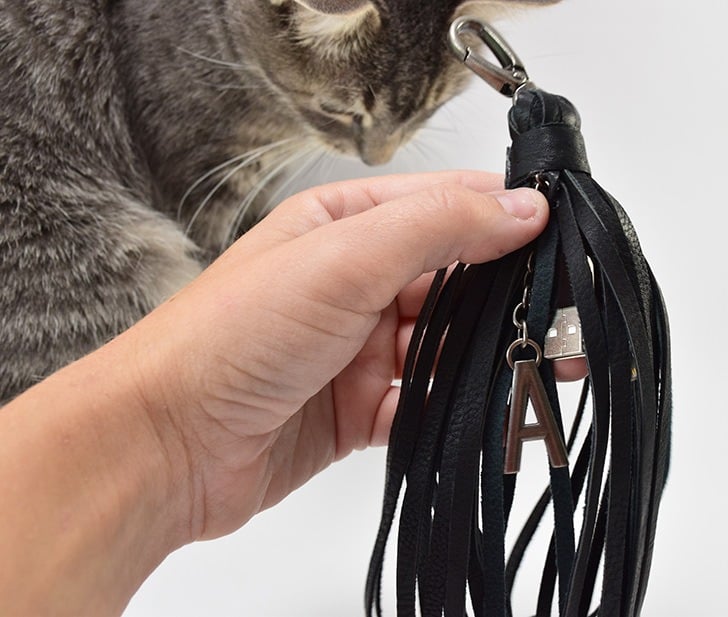 Fluff the tassel and this sucker is ready to go onto your purse!

Now I have moved my tassel all over the place but I found that I like mine best on the zipper for the largest section of my purse. Whenever I need to charge my phone I simply unhook the tassel from my purse and plug in. It’s pretty awesome and I totally love it. I always have a charging cord on me and nobody would ever know any better. Oh, and mine only cost me $4 for the cable and $6 for the tassel. And while I’ve seen the already made one for as little as $14, now, I’m still happier with my DIY version because it’s fuller and longer. Boom. DIY wins again :) 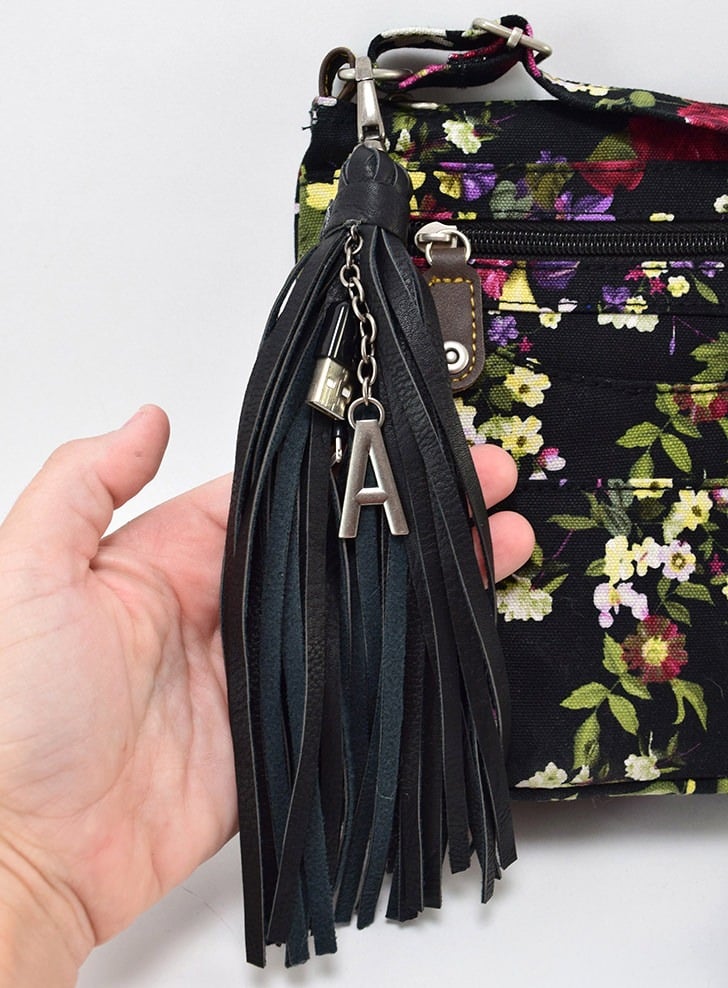