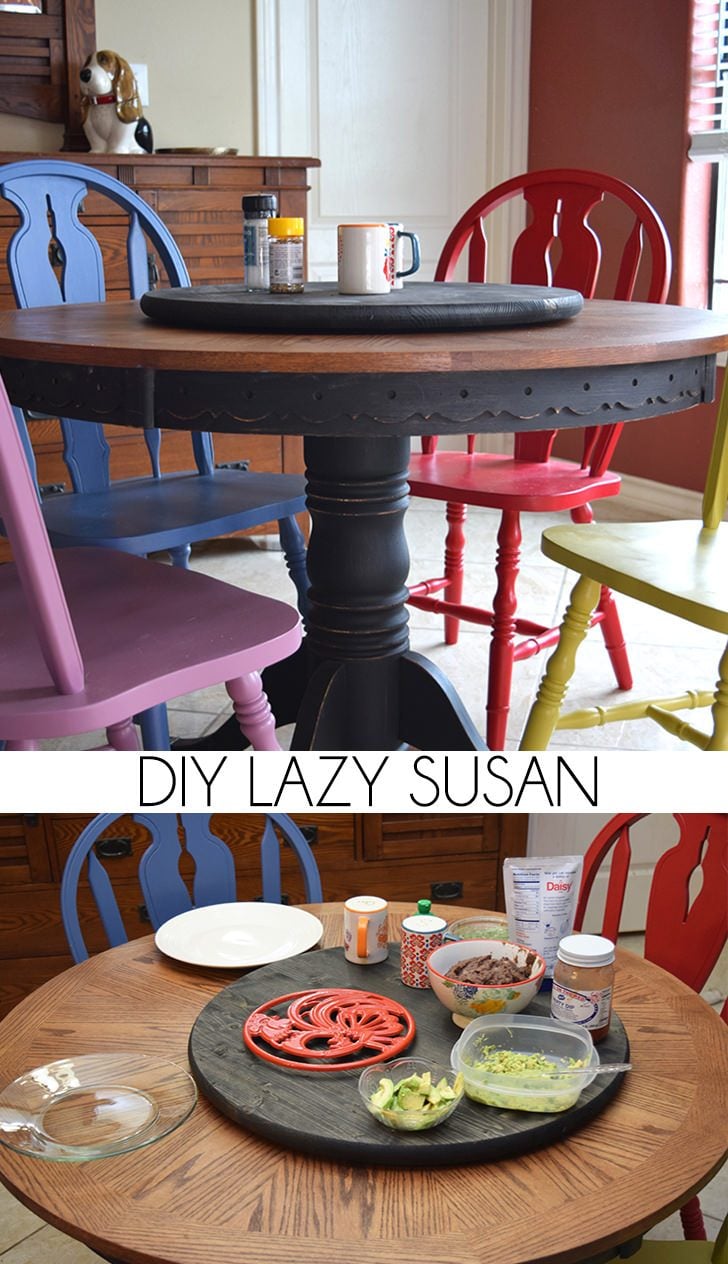 We have gotten just awful about eating out and that poses quite a few problems… 1. it’s expensive and it’s crazy cutting into our budget and 2. More often than not I get sick being a Celiac sufferer.

We’ve been doing lots of driving about town, or rather an area of towns, trying to find someplace we want to call home. We’ve only been in this house for a few months but we’re both over it already. Don’t get me wrong, it’s a beautiful house but it has some pretty big problems. The backyard is tiny and floods so I’ve constantly got a mess on my hands if it even sprinkles outside because the dogs track in a terrible mess. I know, I know, I could always wipe off their feet as they come in but you try and catch Carly. She is constantly bopping around and she is FAST. She makes the Energizer Bunny look like a lazy ass.

I am also having issues being so close to other people. I didn’t realize just how much I came to appreciate having my own space in my old home. I swear I must have flashed my neighbors here a bajillion times already. Remembering that people can see in is a hard one for me to keep in the forefront of my brain. One morning Ollie was FREAKING OUT in the backyard so I hop out of bed to see what is the matter and I’m standing on this itty bitty concrete pad by the backdoor in my panties and a tee shirt and I see exactly what he’s upset about… There’s a man peering over the fence as he builds a gigantic cage in his backyard (why?!?) and has just seen me practically in my all togethers.

But one of the best things about living here with Rob is that I have somebody to sit with me at the dinner table. I hate eating in front of the TV. I feel like it’s mindless and I always overeat myself to being uncomfortable because I pay more attention to the action on the screen than what is in front of me. And so one day when we were talking about the idea of getting a lazy susan to make dinnertime a bit easier at the table since we like to make a big spread with tons of stuff I decided, you guessed it, to DIY instead.

It turns out that the whole thing is super easy. Now my first go I carved a flower out of a tabletop and it was fun to do but the end result was anything but stunning.

A photo posted by Dream a Little Bigger (@dreamalittlebiggerblog) on Apr 1, 2016 at 4:47pm PDT

See. Fun. But ugly! And I TRIED to make it work and went ahead and turned it into a lazy susan but both Rob and I hated it. Plus stuff could get in those grooves I dug out and it just wasn’t very clean. Yuck. So I popped that sucker on the floor and gave Miss Carly rides perched on my lap while it was spinning in circles over and over (she loved it and I kept doing it even though I didn’t because she did :) 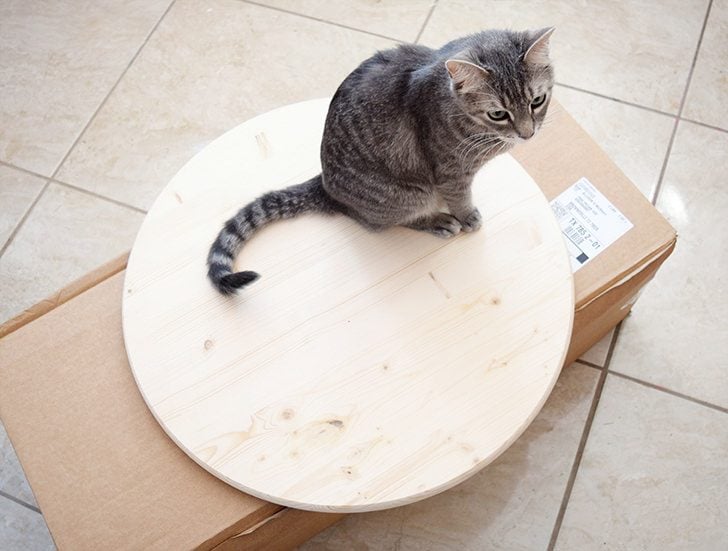 So here is my tabletop. It’s a big beast of a thing at 2 feet wide and I paid about $20 for it at Lowe’s. Now I put this thing on the table in the packaging for about a week and I finally asked Rob “Now that we’ve had it on the table a while is this thing too big? I think it’s too big.” To which he told me that no, it wasn’t too big, in fact it was the perfect size. I was hesitant but I went ahead and proceeded with the big monster, I mean tabletop. 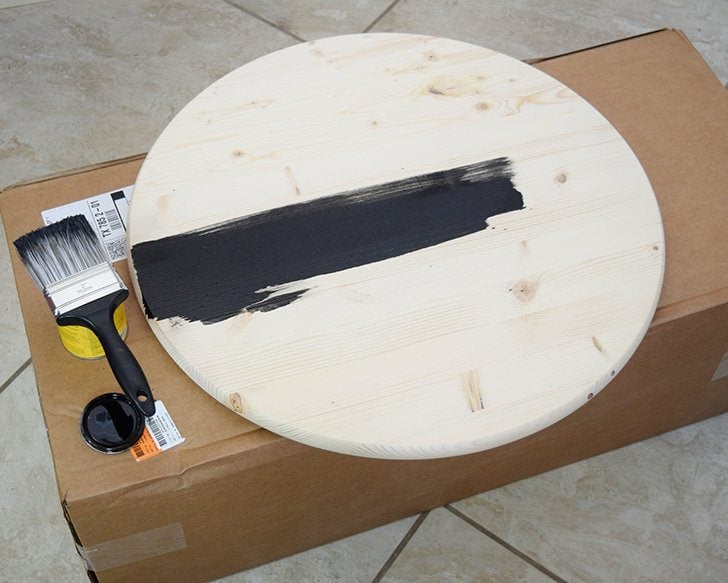 Since my first endeavor was kind of a big flop I decided to go simple the next time, especially since my dining room set is so colorful. This top got a quick treatment with ebony wood stain and a cover of poly to protect it and that is it! Now the tutorial proceeds with the old board a.k.a. the ugly thing that no longer is in my house, which is why the wood is brown instead of black! 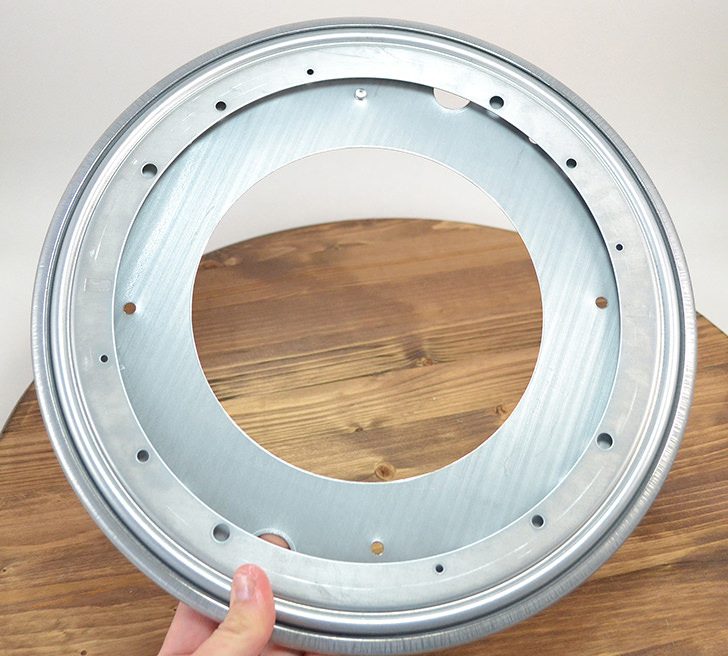 Now this is your lazy susan hardware. It’s super easy to see how it works. Check it out below.

Using wood screws that are appropriate for the thickness of your table top attach the lazy susan hardware to the center of the back side of the table. 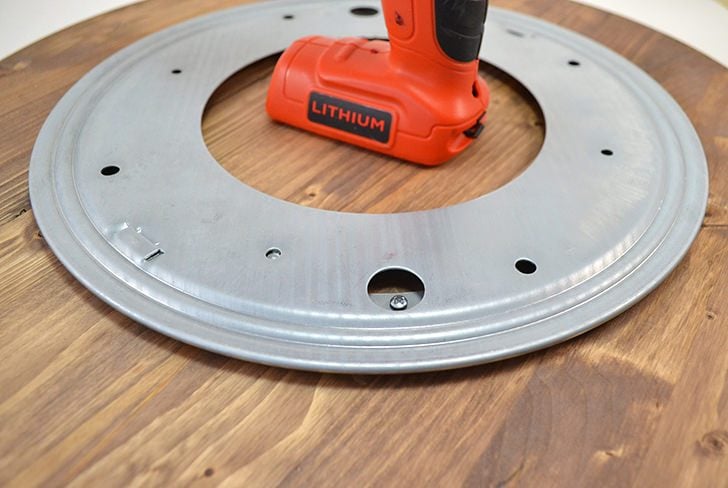 You can move the top portion around so that you have a large hole to use to go through and affix your screws easily. 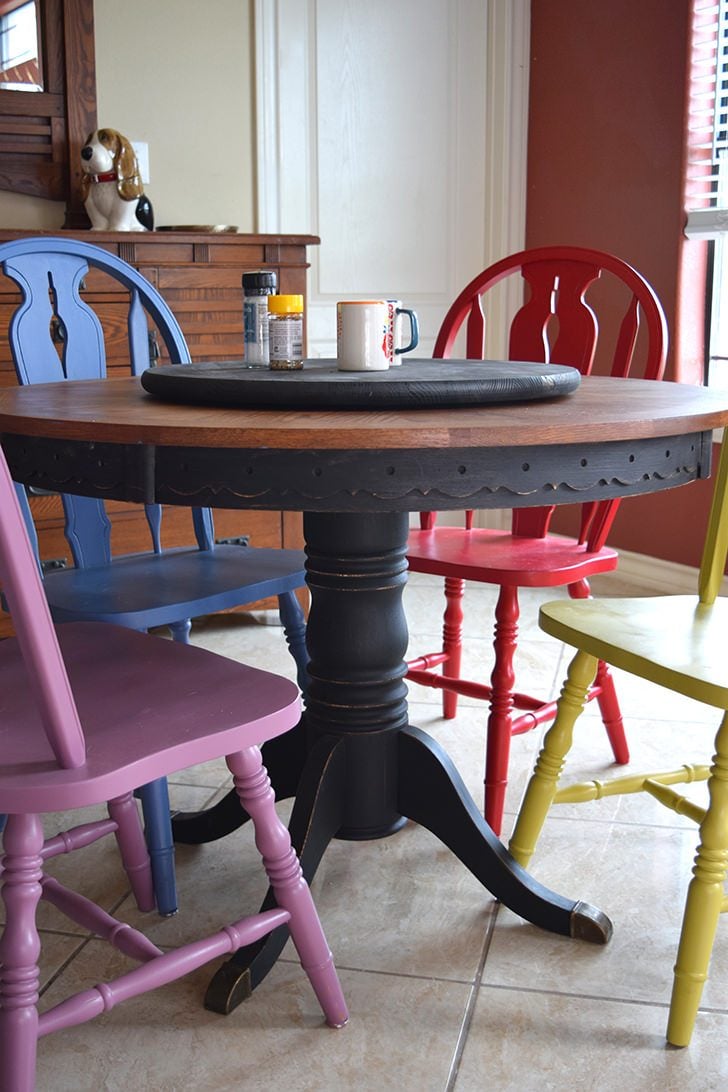 And that is seriously all there is to that. Boom! 24″ monster sized lazy susan for about $27!

Now as it turns out I’m pretty in love with the black stain because it goes with my table set so well. 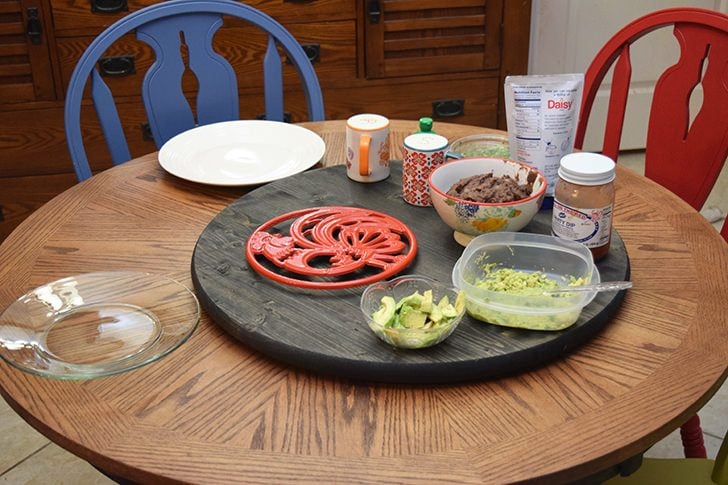 But that sucker is HUGE and it takes up a good portion of the table. Look – it’s off center and our plates barely fit! But the good news is we have started to skootch it over a bit and there’s plenty of room for plates and whatnot. So far Rob hasn’t gotten the hang of it. He still reaches but soon he’ll get down with the lazy part of the whole thing! 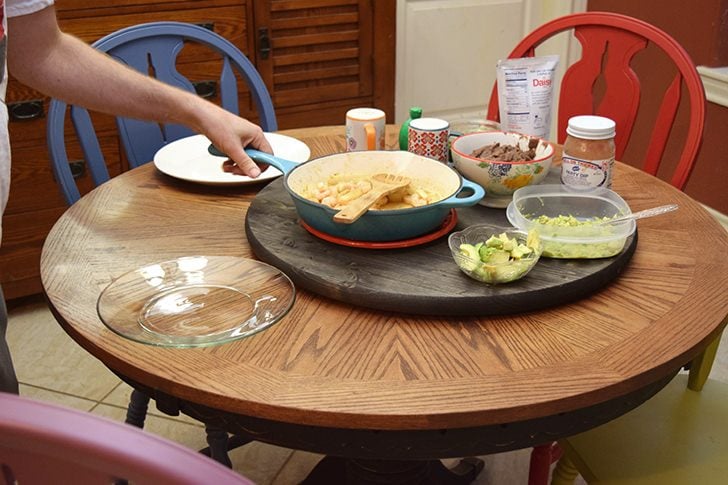 And look at that spread! Dude made me shrimp fajitas. He’s a keeper!

Now it may be too big, but it’s not ugly like the last one and it’s SO MUCH CHEAPER than anything I could find that I liked to buy online. So I’m going to count this one a win! 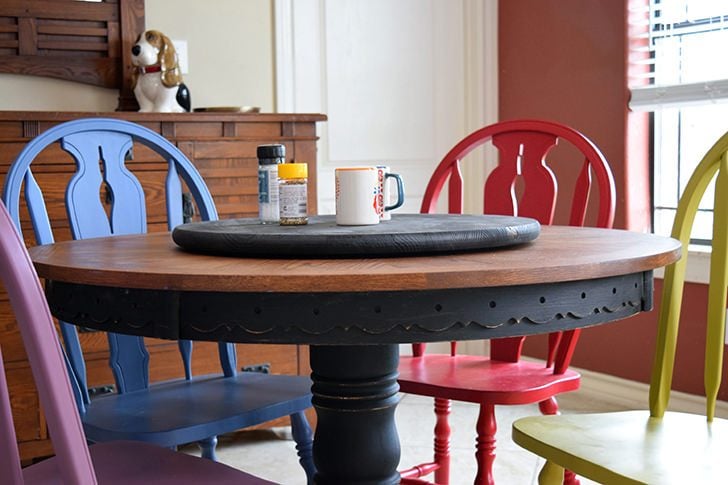