Marla was the first to test the cat scratching post out 18 months ago!

So it was around 18 months ago that I built a cat scratching post for my kitties that cost me around $40. I had purchased one from the store for $40, that if memory serves, didn’t last more than a handful of months before it was a shredded nightmare.

Even with a serious lack of hardware or tool skills I had to be able to put something together that would far surpass anything I could buy in the pet store for $40. Since then I’ve gotten tons of emails from others who have made their own and even more emails from people asking, but will it last long enough to be worth all of that effort?

And my answer, plain and simple is YES. 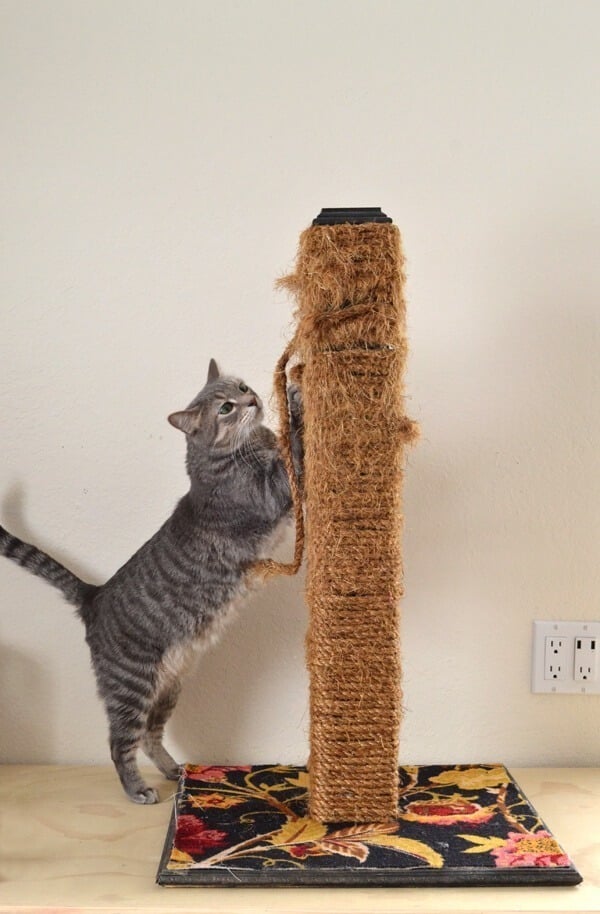 I dragged my cat scratcher into my office where I had the best light and got ready to snap some pics. Miss Marla of course had to scratch it immediately since it was on a table instead of on the dining room floor. But here you can see how this sucker has lasted through 18 months and 4 cats. Well, 5 cats for a few months before I found the stray Baby Girl a new home (she only had three feet and I miss her terribly!).

The rope is coming undone at the top where most of the cats stretch to scratch. And to be honest, biting at it and tearing it further down seems to be the thing to do, making it worse fairly quickly.

Only Liddy, the smallest ever scratches at the bottom anymore and she’s so lazy that she lays down while she’s doing it. The rope toward the top needs to be replaced but the rest is in pretty good shape. The rug at the bottom has seen better days but since I’ve been changing my decor so much it doesn’t really fit in anymore anyway. I think that binding the edges or gluing them could help to keep the carpet from fraying but honestly, that’s not much damage for a year and a half of constant use. 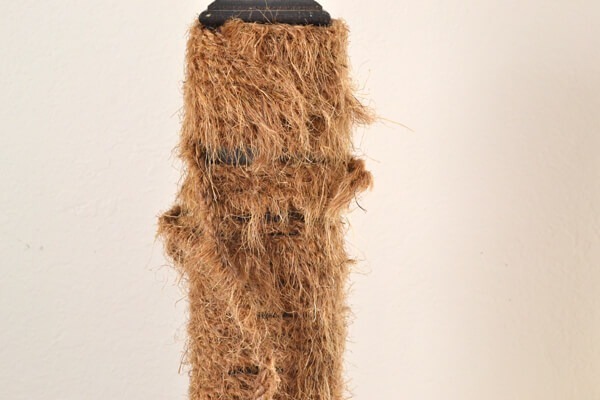 And here’s the damage up close. The rope is basically frayed out. Only in two spots did the rope become detached from the pole and that was pretty recently. Oh, and the kitties have never hurt their paws on the nails holding the rope down which some are concerned about.

Basically for another $6 of rope this thing will last another 18 months. Definitely worth the investment! Want to make your own? Check out the original post here!