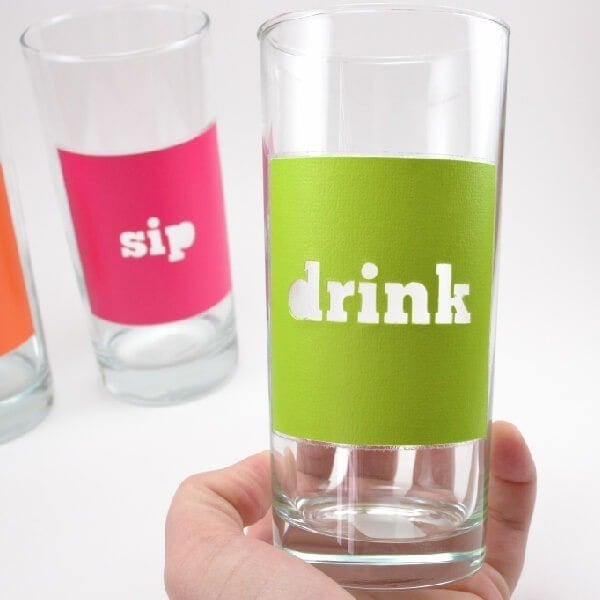 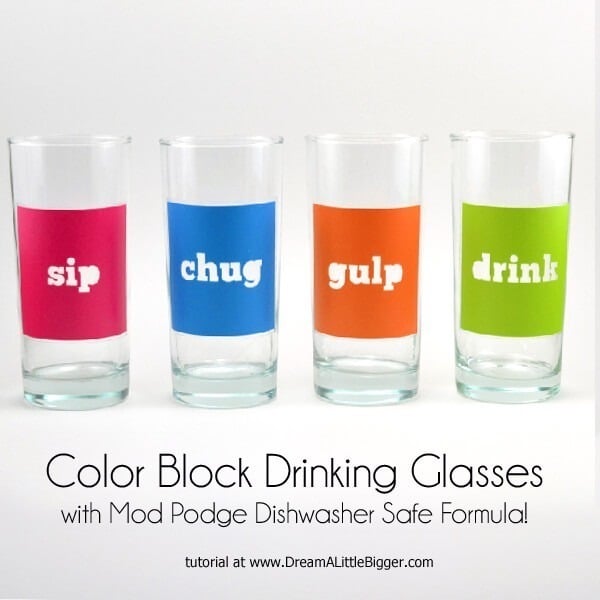 So a really, really neat thing happened to me… and I’m sharing this particular post on Valentine’s Day for a reason… I’m in LOVE! The good people at Plaid sent me a jar of Mod Podge with a nifty blue label. To be honest I glanced at it and set it on the desk. Then one day I really looked at it and saw “Mod Podge dishwasher safe formula”. Huh? What? Awesome! 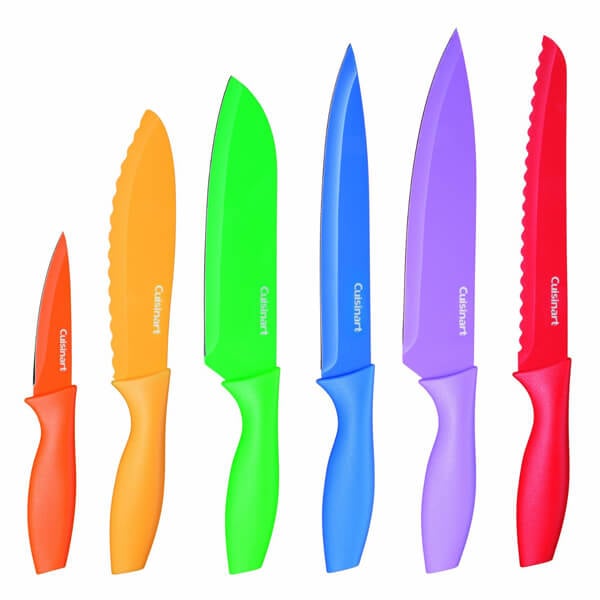 aren’t they pretty? And they were less than thirty bucks. Score! These cuties have totally changed my thoughts on my kitchen. Before I wanted minimal color. Now I want ’em all!

So I ran out to pick up some cheap glasses that SAME day that I figured out that the Mod Podge I had was literally dishwasher safe. Seriously… same freakin’ day. And my color block glasses were born that same day as well. To be honest this is an idea I had been knocking around for a while, but I worried that I wouldn’t be able to paint them well enough so I would wind up dismissing the potential project. So I’m super stoked that this has finally happened. Hurrah! 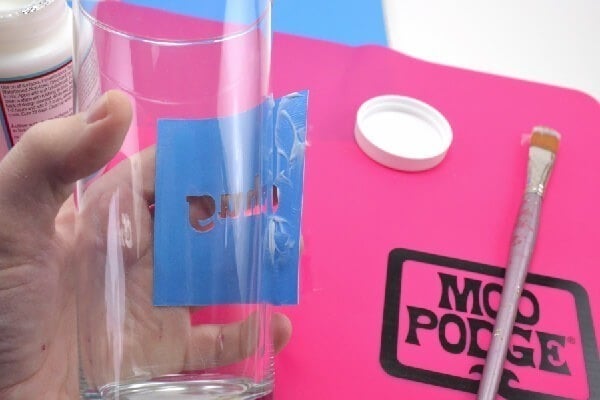 Okay, I totally didn’t show cutting the squares our or what they look like. Sorry. I got excited…

If you’re not using a cutting machine, cut out squares 3 inches by 3 inches and cut words out of them like chug, drink, etc. I used the font Chunk Five because it is one super awesome font.

Apply Mod Podge to the inside of the cut out and apply to the glass. Hold down for a few moments and wait. See which areas of the paper are not holding down and apply more Mod Podge and wait again. It seems tedious but the whole thing lasts maybe 5 minutes per glass. 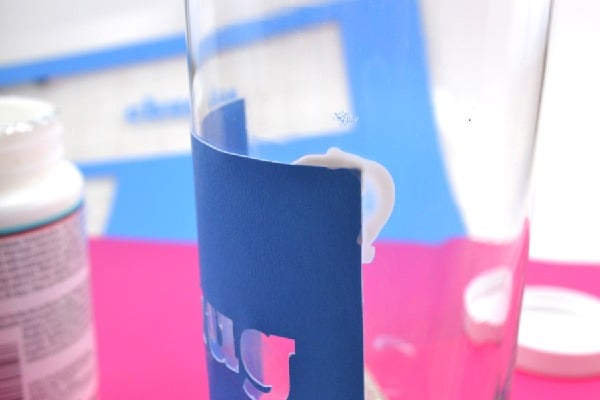 Now this stuff dries clear but it’s, like, a textured clear. SO you’re going to notice where it is. Like that weird defect looking thing in the glass above the white blob? That’s dried Mod Podge and it is really noticeable. So be sure to clean up anything that squeezes out as well as you can. 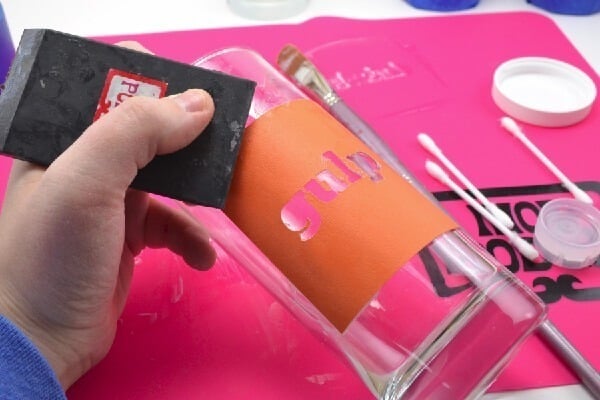 And I found that using a squeegee helped me out immensely for getting the paper to lay flush on the glass but this is optional. 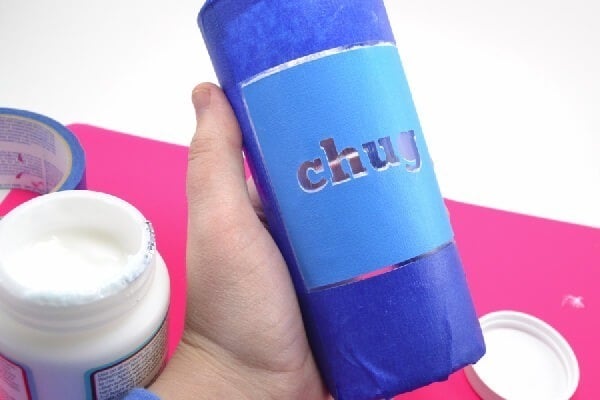 Next clean up any of the Mod Podge that went stray using a razor blade. Just scrape that business off. Use painter’s tape to mark off a square around your square paper. This is going to have the glass podge on it changing the appearance of the glass, but it will also help seal up the edges. A necessary evil and not really evil at all because in the end it looks pretty awesome.

Using a very soft bristled brush run a thin coat over the paper and glass. Set aside and let dry 1-2 hours. The directions say to repeat for 2-3 coats but since mine were so thin to avoid unnecessary texture I went with 4. 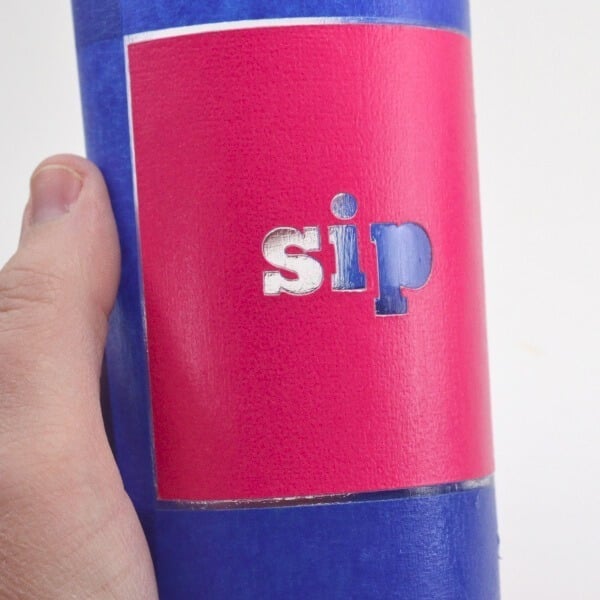 And here’s a closeup of the word after 4 thin coats. See how the glass is no longer smooth? That’s the texture I spoke of. But it looks kind of cool, no?

Bam! Check out that row of colorful cuteness. Can you tell I’m waaay excited?! 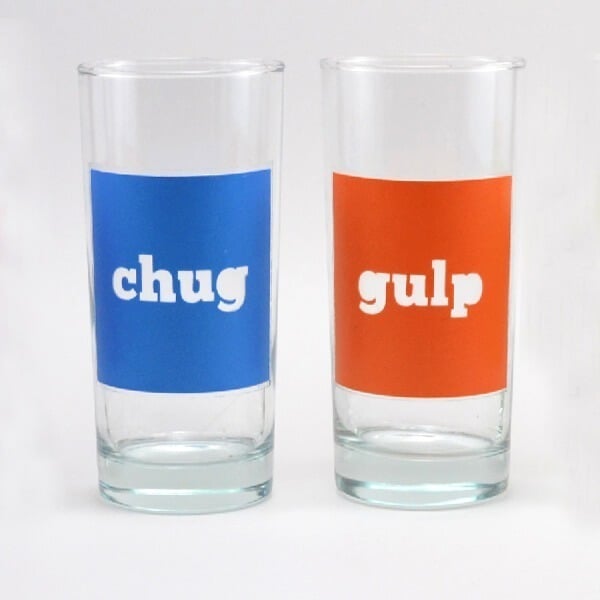 Remove your tape and hit the glass again with the razor blade to remove anything stray that might have dried on. And now for the difficult part. Set someplace safe to cure to dishwasher safe status for 28 days. It’s going to be a rough 28 days, people.

But I’ll give you a shout in a few months to let you know how these bad boys held up. And if they do, I’ve got plans for lots of awesome dishware. Hurrah!

I was sent a complimentary 8 ounce jar of Mod Podge Dishwasher Safe formula from Plaid.

I'm a crafty cat lady with big dreams and an inability to sit still. I make it, I live it, I love it. Here at Dream a Little Bigger you'll find lots of inspiration for crafts, crochet, DIY, food, pet life and all things rainbow. Lots and lots of rainbows.
419 Shares
Pin384
Share35
Tweet
This site uses cookies: Find out more.