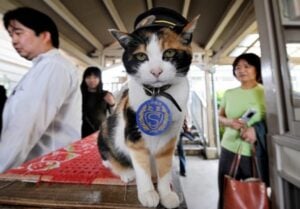 Wearing a stationmaster’s cap of the Wakayama Electric Railway, the nine-year-old female tortoiseshell cat named “Tama” sits on a ticket gate at Kishi station on the Kishigawa line in the city of Kinokawa, in Wakayama prefecture on May 22, 2008. The number of passengers who travel along the line increased 10 percent for the year to March 2007 from the previous year, credited to Tama after the “stationmaster” cat appeared at the unmanned small station. AFP PHOTO/Toru YAMANAKA (Photo credit should read TORU YAMANAKA/AFP/Getty Images)