I grew up in Oklahoma and I lived there until very recently. It may not be fancy, there may not be an ocean but I love it. And I miss it. The people are GOOD. It seemed that very rarely you’d run into somebody who was very rude and then they really stood out because it was not the norm.

I miss people rushing to hold to door open for you when they see your arms full or insisting you go ahead of them in the checkout line when you’re holding your gallon of milk and they have an heaping cart full of things to buy. Here I’ve literally had a door hit me in the side of the head and I’ve noticed this thing people do at the store that irks me beyond belief… they’ll have one of their children (or their husband) hold their spot in line at the cash registers. They will have a cart with of a few things ahead of you and then the family members come pulling up with their carts adding stuff to it. So instead of being behind a few people with a few things, you’re behind a few people with a ton of stuff. And sometimes, to make things worse, they are holding up the line waiting for the family member that didn’t get their ass in gear before they actually made it up to cash register. How rude is that? It happens at the grocery store, it happens at Hobby Lobby and it’s one of the things I dislike most about this area. The people can be selfish and rude and won’t think twice about screwing you over if it benefits them. Yuck.

Now not everyone here is bad and not everyone in Oklahoma is good. That’s just not the way that real life works. But it is a vast difference in the general behavior of the locals from one extreme to the next. So I was feeling a bit sentimental when I eyeballed a more huge than normal embroidery hoop I had in my stash that I have never ever used. It seemed a good time to make a dreamcatcher, like I had been taught to as a child. Being in Oklahoma I had quite a few Native American teachers who were passionate about their history. I don’t know that in many other states they learn the truth about how poorly the Native Americans were treated. In a word, it was appalling.

And it might be slight bit of desperation that encouraged me to make my dreamcatcher in the event that it works for me. I’ve been thinking it would be very nice, indeed, if this helps to keep all of the awful nightmares I’m having at bay. Because watching the people you love die night after night sucks. And I’m very tired.

Now it took me forever to remember how to do this. I literally sat in front of the TV late on a Sunday night while Rob was out at a model drawing session. I kept trying and trying and trying until I remembered how to “knot” the string so that it stays securely put. I watched all but about 15 minutes of Vanity Fair with Reese Witherspoon before that business started to work out. Huzzah!

So head on over to Mom Spark and learn how to make your dreamcatcher. I’ve even tailor-made mine to fit in with my home’s decor and you can do the same, too! Pretty, possibly functional and making my space a bit more lovely in general makes this one successful DIY! 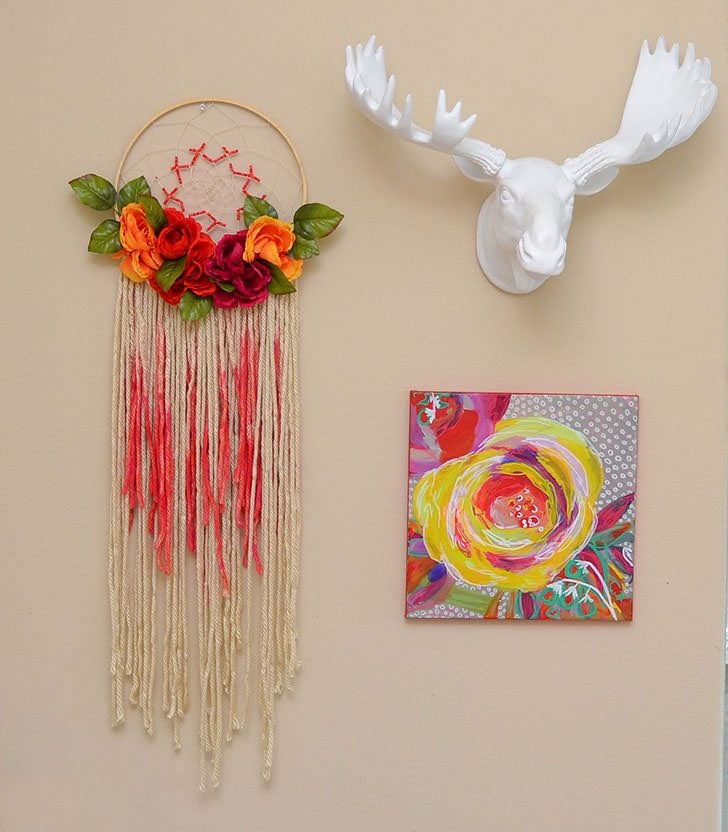